Notre Dame scientists and engineers are engaged in a number of groundbreaking biomedical research projects aimed at combating blindness, arthritis, blood disorders and a host of other diseases. The common denominator in all this work is an unusual class of cells that might be thought of as Mother Nature’s duct tape, the thing that can become anything and fix anything.

Stem cells are undifferentiated cells that serve the body as the universal building block and repair kit. In effect, they can become any of the specialized cells of the body’s various tissues and organs. With so much potential, the hope has been that one day they may unlock the secrets of human development and yield powerful therapies to treat a wide variety of genetic disorders and diseases, including cancer, heart disease, Alzheimer’s, Parkinson’s and more.

Yet for as much promise as they hold, they have been shrouded in controversy. The Catholic Church and others have had moral misgivings about certain types of stem cells. In this context, it is important to note that absolutely none of the research conducted at Notre Dame violates Church teaching on the sanctity of life.

When it comes to the ethics of stem cells, not all are created equally. “The crucial issue is their source,” says Phil Sloan, the Notre Dame professor of liberal studies whose field is the philosophy and history of science.

Stem cells come in three varieties: embryonic, adult and what are called induced pluripotent or iPS cells. Of the three types, Sloan points out that only research using embryonic stem cells has been condemned by the Church. The Church is opposed to their use because human embryos must be destroyed to acquire them. The other types of stem cells are derived from adult tissue and therefore not morally problematic.

“There is no moral objection to research and therapy of this kind when it involves no harm to human beings at any stage of development and is conducted with appropriate informed consent,” the bishops wrote.

Against this backdrop, Notre Dame is actively engaged in exploring this “better way.”

Actually, some of the most advanced and promising stem cell research taking place at Notre Dame doesn’t even involve human cells. Stem cells from fruit flies, tropical fish and mice have been yielding answers to important medical questions in ND labs for some time. 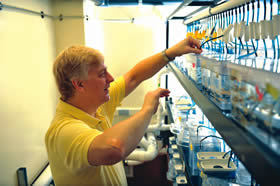 For instance, adult neuronal stem cells from the zebrafish, an inch-long tropical fish with five blue stripes on the side of its body, have helped Professor David Hyde, pictured left, and his colleagues to gain a better understanding of the development and regeneration of the retina. A full understanding of the mechanism might one day make it possible to repair human retinal damage, such as that caused by macular degeneration, glaucoma and other retinal diseases that lead to blindness.

Additionally, Hyde points out that since these same neuronal stem cells exist in the brain, a full understanding of the regeneration mechanism might one day also lead to therapies for diseases that destroy brain tissue, such as Parkinson’s.

Professor Robert Schulz, meanwhile, has been studying fruit fly stem cells to gain a better understanding of the biochemical processes involved in blood cell production. Specifically, Schulz is screening the fruit fly’s genetic makeup to discover which genes are involved in triggering stem cells to become blood cells. A knowledge of these genes will reveal the biochemical mechanisms involved, which in turn is crucial to understanding blood diseases and cancers such as leukemia.

On another front, mechanical engineering professors Diane Wagner, Glen Niebur and Ryan Roeder are engaged in a variety of research projects working with mesenchymal cells from mice. These are a type of adult stem cell that differentiates into the specialized cells of bone, cartilage and fat. Their work has implications for treating arthritis and various orthopedic disabilities.

Through the Mammalian Induced Pluripotent Stem Cell Consortium at ND, Professor Malcolm Fraser is helping to advance work with iPS cells, which are adult differentiated cells, such as skin cells, that are reverse engineered to have the advantages of embryonic stem cells without the moral concerns.

Several years ago Fraser and his colleagues discovered a certain genetic element that other scientists have used to circumvent a serious drawback with the conventional method of creating iPS cells. Namely, PiggyBac, as the snippet of DNA is known, inserts then removes a cancer-causing gene used in the process. In the conventional method, the cancer gene remains in the cell.

Notre Dame’s interest in stem cell technology, however, is not confined to the science of the cells. The University recently launched an interdisciplinary adult stem cell initiative, offering seed grants to encourage ND faculty to expand their work in the area. The effort aims at fostering scholarship and training along the legal and ethical dimensions of stem cell research as well as science.

“We are on the frontier of some pretty important work that can relieve a lot of human suffering, so it’s essential to engage the moral and legal issues as well as the science,” says Robert Bernhard, Notre Dame vice president for research.

In addition to scientific stem cell research, the University hopes to offer training to humanities, law and science graduate students.

“By coalescing our faculty in this area we hope to educate our science and engineering graduate students with a moral and ethical background in this work. At the same time, we hope to offer those in arts and letters and the law a scientific foundation from which to base their own work,” says Hyde, who directs the Center for Zebrafish Research.

For instance, a workshop is being planned for summer 2011 to bring together scientists and other scholars to examine the ethical dimensions of stem cell research and develop a rationale for preferring adult stem cell research over what some have termed “destructive” embryonic research.

“It will be an opportunity to think about some deeper philosophical issues related to this, with the intent of making a more compelling case to the biomedical research community,” Sloan says.