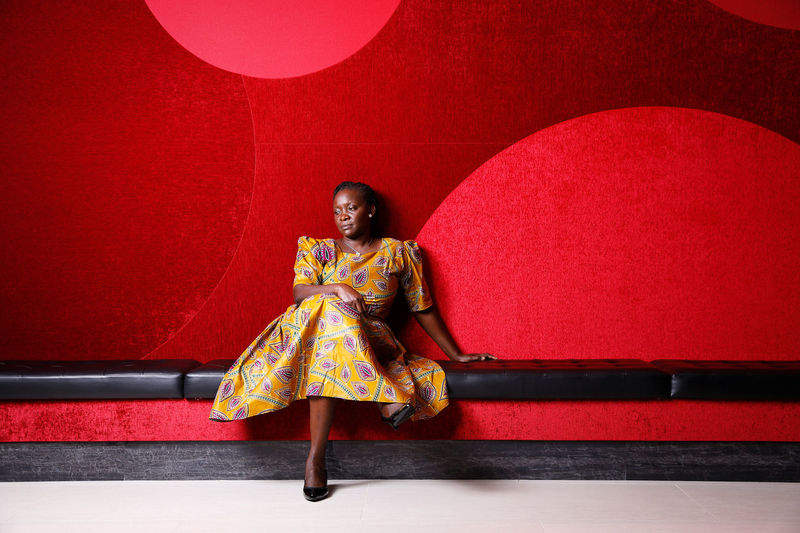 His portfolio includes artistic images of athletes, musicians and fancy cuisine; his portraits are exceptional. So when we needed photos taken of Victoria Nyanjura, a graduate student in Notre Dame’s Keough School of Global Affairs who was in D.C. at the time, we called again on Timmes.

As a girl at a Catholic school in Uganda, Nyanjura was abducted by the Lord’s Resistance Army, then suffered through eight years of brutal captivity with that violent cult led by the notorious Joseph Kony. That tale and her story of escape and redemption are told in our autumn issue.

A week or two after art director Kerry Prugh made the assignment, we received dozens of images of Nyanjura from Timmes, but could only use one or two or three with the story. This is often the case. We need a photo or two to accompany the text of an article and ask a photographer to give us their best. To be good and artful and creative. To bring the person to life in a freeze-frame, two-dimensional fabrication. There’s an art to photographing people, and it requires vision, people skills, time, dedication to one’s craft — and ample, quality equipment.

It also asks a lot of the subject. Very few of us are comfortable in front of a camera. Few want to pose, to be asked to look natural, to try on various facial expressions while a stranger is capturing us with aims and clicks.

Typically, we get dozens of images, but use only a few.

I was thinking all this as we looked through the images Timmes had sent after the photo shoot. It didn’t seem right, it seemed unfortunate not to publish those photos left out of the print edition.

In this series of images Timmes brings to life the many faces of a remarkable woman. In color and in black and white. Beauty and grace and integrity in her face, and humor too.

So we bring them to you, here at our website. For you to see for yourself.

The photo essay is an appreciation to both artist and subject, and to acknowledge the work of so many who contribute to this publication. What we deliver in print four times a year is the final result of a grand collaboration that begins with thoughts, ideas and other phantoms and moves toward the fulfillment of hopes, plans and effort to make good art. Something tangible. To be held, studied and read.

We hope you enjoy the show.