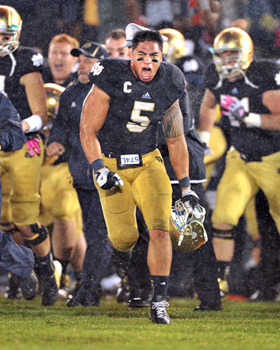 Manti Te’o is the main character in a bedtime story that helps everyone involved with college football sleep at night. He’s a great player, he seems like one of the all-time good guys and he endured traumatic personal losses this season with inspiring grace. But that doesn’t make him a Heisman Trophy candidate.

I’ve heard pundits talk about his “story” as a reason to support Te’o for the award, a point of view that reduces the Heisman presentation to a very special episode of Around the Horn. As impressive a person as Te’o appears to be, that’s the least of his credentials to be named college football’s best player.

For that reason, when the grassroots Te’o-for-Heisman campaign started laying sod, I didn’t pay much attention. He’s also a linebacker, and linebackers are like libertarian candidates — attractive in the abstract but really just a temporary distraction until the quarterbacks and running backs emerge as the mainstream nominees. Te’o would not want for well-deserved honors and respect, but, like always, the Heisman would be reserved for some Johnny Football (metaphorically speaking, of course, I could not have imagined the actual, trademark-pending dude on the dais).

After the USC game, though, Brian Kelly said something that made me rethink my acceptance of that status quo. He said, “If a kid like Manti Te’o can’t win the Heisman, they should just make it an offensive award.”

It was a perfect pitch for his guy, lobbying on Te’o’s behalf, but in a way that forced voters to reconsider the meaning of the Heisman itself. In award debates, that’s where the action is. People quibble and quarrel over the definition of “most valuable” and “most outstanding,” parsing statistics and intangibles to define the indefinable: who’s the best.

Somebody has to be. And I’ve become convinced that Te’o’s case holds up better than the other finalists, Texas A&M’s Johnny M. Football and Kansas State’s Collin Klein. Those guys are statistically garish, with Football’s total yards blowing past Cam Newton’s SEC record, which blew past Tim Tebow’s, Heisman winners both. And Klein has accounted for more of his team’s offensive production than last year’s winner, Robert Griffin III.

Defense might win championships, but it doesn’t win the Heisman, so Te’o can make no such favorable comparisons. By definition, defensive statistics also pale in comparison to the snowdrifts offensive players compile, but Te’o’s stick.

His 103 tackles — a staggering 42 more than any other Notre Dame player — places Te’o only 59th nationally with an 8.58 per-game average. That sounds almost mediocre until you notice that there are only two players ahead of him from a BCS bowl team (both of them play for 5-loss Big Ten champion Wisconsin). Alabama’s defense has nobody in the top 100.

He did it under the bright lights too, a virtual Heisman prerequisite. Against Oklahoma, the game when Notre Dame’s house of mirrors was supposed to come crashing down, Te’o had almost as many tackles (11) as the Sooners had rushing yards (15). He has strapped the nation’s best defense to his back, carrying an entire team from nowhere to No. 1 in the space of 12 weeks.

Picture the Irish without Te’o and the Bedford Falls charm of the season quickly descends into Potterville. Without him, it goes without saying, Notre Dame would not be within one win of the national title. Without him, it can’t be said often enough, Notre Dame might well be bound for some Buffalo Wild Wings bowl abomination.

Maybe the same would be true for Texas A&M and Kansas State without their George Baileys, but Te’o holds the ultimate statistical and intangible trump card over both: zero losses.

As often as not, a single question settles contentious Heisman debates: who is the best player on the best team? Among this year’s finalists, that’s an easy answer.

If Manti Te’o doesn’t win the Heisman Trophy, it will be just what Kelly said it was — an offensive award.

Jason Kelly, a former sports columnist for the South Bend Tribune, is an associate editor of the University of Chicago Magazine. His most recent book is Shelby’s Folly: Jack Dempsey, Doc Kearns, and the Shakedown of a Montana Boomtown. Email him at jasonkelly545@gmail.com.