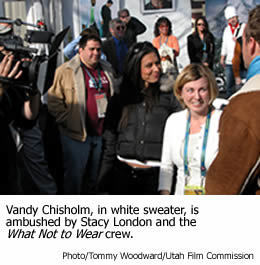 Notre Dame T-shirts and sweatshirts are hot sellers. But Vandy Chisholm ’01 learned they may not always be the appropriate wardrobe choice.

Chisholm had a moment of national celebrity in April when she was “made over” courtesy of the popular Discovery Channel/TLC reality program What Not To Wear.

Her fashion crime? “Vandy likes to wear head-to-toe sports paraphernalia, whether she’s going to a game or not,” her friend Katie said.

While at lunch, Chisholm was “ambushed” on camera by program hosts Stacy London and Clinton Kelly, presented with a $5,000 Visa card, and whisked off to New York City for a five-day shopping marathon and makeover. In return, Chisholm had to hand over her entire wardrobe, including the Notre Dame logo apparel, and lose the “frumpy college-girl look.”

“They didn’t go to Notre Dame,” she replied.

Hidden-camera tapes shown on air gave viewers an idea of Chisholm’s working wardrobe. “They happened to tape me on days when I was more casual than I should have been,” she says. “I didn’t take it personally.”

Chisholm flew to New York on Sunday morning, and was there Monday through Friday. “It was long and tiring,” she says, “and there were a lot of re-takes. We went from 8 a.m. to 8 p.m. Great clothes; what can I say? I’d want everyone to do it once, but I don’t think I’d want to do it again.”

The question she’s gotten the most since the show aired is whether she really had to give up all her clothes. “They let me keep five things,” Chisholm says. That included her Notre Dame women’s boxing T-shirt (she participated in the club sport junior year) and the scarves her mom knit.

“I wasn’t putting the time and effort into shopping,” she conceded afterward. Maybe sweatshirts and T-shirts should be kept for the weekend.” She plans to keep the haircut.

Now her biggest fear is that someone is following her with a hidden camera, to do a follow-up show. “Right now I have on a Notre Dame sweatshirt, a pair of jeans and flip-flops,” she says. “I didn’t buy a bunch of suits. I got plaid pants, great jeans and tops. No fancy dresses I would never wear again.”

Reaction to the show has been positive. “Everybody loved it,” she says, adding “It was fun.”

Chisholm and husband, James, also class of ’01, are in the middle of a move to Pittsburgh, where he plans to work on a doctorate in education at the University of Pittsburgh.

Memo to Stacy and Clinton: She’s asking for Notre Dame apparel for Christmas.