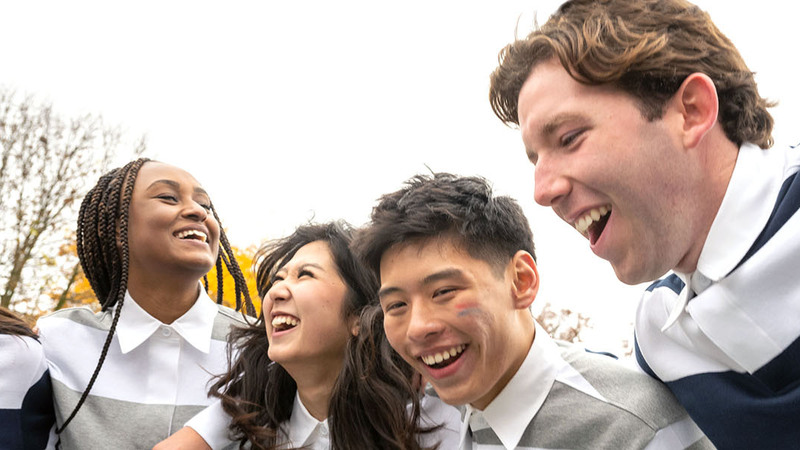 As an undergraduate business student, Thom Browne ’88 had a classic Notre Dame experience. He lived in Alumni Hall, competed for the varsity men’s swim team and loved going to football games on fall Saturdays. After graduation, he even got that cushy consulting job that most of today’s Mendoza students would love.

But then as now, Browne bucked the trend. Six months into his first job, he quit and moved across the country to Los Angeles. A foray into acting fizzled out and Browne relocated again, this time to New York, where he got the job that changed his life.

This past fall, everything came full circle for Browne when he returned to Notre Dame. The occasion? The fashion designer and entrepreneur’s annual football game photo shoot — a mainstay of the Thom Browne label since 2014.

Usually held in New York City’s Central Park, Browne’s signature event took place last year on October 26 on South Quad, in front of the Rockne Memorial Gym, where Browne once practiced as a competitive swimmer. This time around, instead of heading downstairs to the pool, he dashed up to room 205, where his latest collection was laid out across a dozen tables — and student models were preparing for their assignments.

Kate Ross, a junior American studies major and one of the lucky few selected to model for the event, appreciated Browne’s reasons for his return to campus. “He wanted to give us an opportunity that he would’ve wanted when he studied here,” she says, “and I’m really grateful for that.”

Sophomore Eno Nto, a design major and forward on the Irish men’s soccer team, already understood Browne’s stature in the fashion world. A former creative team lead for Polo Ralph Lauren, Browne launched his own label in 2001 and among other accolades earned designer-of-the-year honors from GQ magazine in 2008.

“To be associated with such a big name allows for students like me, who are looking to combine their degree in design with a more specific focus in fashion . . . to explore a different industry,” Nto says, noting the Notre Dame program’s emphases on industrial and graphic design. “It offers us a different insight.”

A large contingent of Browne’s staff was on hand to coordinate the shoot and open a window into the inner workings of the fashion world. Taylor Dellelce, a sophomore visual communication design major and the editor of Notre Dame’s edition of the student-run fashion publication Strike Magazine, felt their presence underscored Browne’s commitment to the event.

“Videographers, photographers, designers, PR people, people that really didn’t even need to be there,” Dellelce says. “He just wanted to give us that exposure and experience of seeing all these people in all their different careers and learn about how they got there.”

Inside the Rock, the student models received their roles for the shoot — player, onlooker or cheerleader — and were fitted accordingly. Browne’s team snapped pictures of them in their outfits and sent them on their way ahead of that Wednesday’s shoot. “It was like we were modeling for them and doing a job, which was pretty cool,” Nto says.

“I didn’t expect for [the staff] to care about us as much as they did,” Dellelce adds. “They were making sure we were comfortable, having fun, and that we knew what they were doing. They really tried to make it a great experience for us.”

Nothing made that clearer than their instructions: Relax, have a good time, you look great. They would just be playing a game after all.

It wasn’t that simple on the morning of the gray-versus-navy shoot two days later. During warmups, one of the students on the navy team was learning how to catch a football. “Make a triangle with your hands,” another suggested.

Ross, a dancer, had a similar dearth of team-sport experience. She learned on the job, drawing on her teammates’ expertise during the game.

“They were telling me we’re going to run this play or that play, and I just said, ‘You’re going to have to break that down for me,’” she says, laughing. “By halftime I had it figured out.”

Action on the sidelines: Clad in gray dress shirts and unisex skirts over trousers and striped cardigans, the cheerleaders put on a show, waving their red, white and blue pom-poms as they led the crowd in a variety of chants. (“When I say ‘Thom!’ you say ‘Browne!’”)

“It was a little weird, but in the best way possible,” says one cheerleader, Benjamín Rascon Gracia, a junior political science major. “I wonder what it was like for him to hear his name being chanted by a crowd.”

Unfazed, Browne stood nearby, watching the game closely in one of his trademark gray suits — short pants despite the nearly freezing temperatures. The night before the photo shoot, during a conversation with former GQ editor Michael Hainey ’86 in Washington Hall, Browne reflected on the significance of that fashion staple in his career.

“I feel like the most important designers over the last hundred years bring an image to your head when you think of who they are. And that for me was that gray suit,” he said. “We all grew up with parents or people that usually wore that gray suit to work. And I wanted to take that very mundane idea and give it back to people in a way that it wasn’t that. Twenty years later, I build every collection on that idea.”

This spring, Browne will take part in a one-credit, six-session course, Strong Suits: The Art, Philosophy and Business of Thom Browne. His take on the gray suit will undoubtedly be a topic of discussion.

Dellelce has registered. “At the end we all get a dinner with Thom Browne,” she says.

The photo shoot, the short course and Browne’s appearance at Washington Hall are all part of his role as artist in residence at the Notre Dame Institute for Advanced Study. One of the institute’s goals is to expand its academic research mission into the arts.

Junior art history major Kendra Lyimo approves of that commitment. “This is unique,” she says of this year’s focus on fashion, “seeing that as art. For me, it was art in motion. It was seeing art being made.”

High fashion is often reserved for the runways of Paris and Milan, far from the green quads of South Bend, Indiana, and a school shaped mostly by religion and football. On a cold Wednesday morning on South Quad, Thom Browne redressed those core notions, bringing art and style to the fore.

José Sánchez Córdova was this magazine’s autumn 2022 intern. A junior from Guaynabo, Puerto Rico, he is studying political science, journalism and French and covers sports for The Observer.