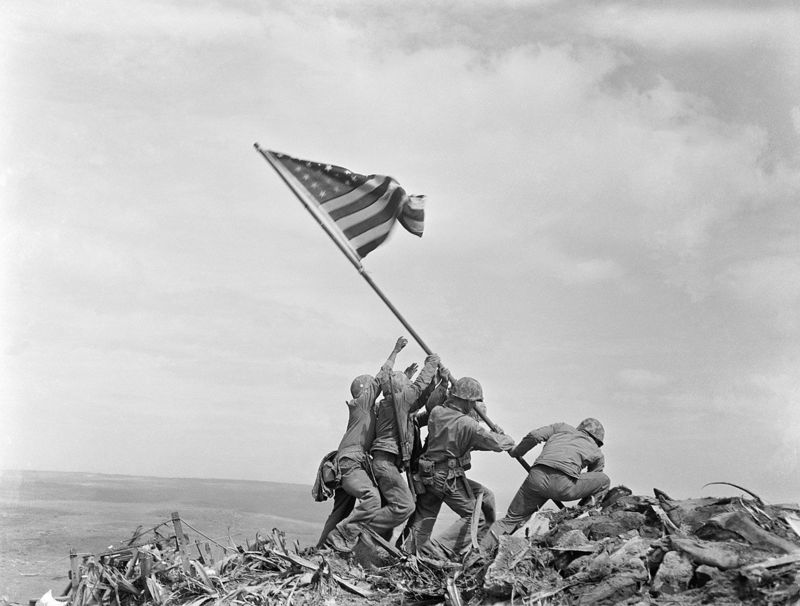 Shortly after noon on February 19, 1945, the troop transport USS Highlands moved to within two miles of Iwo Jima to begin receiving the first casualties from fighting on the South Pacific island. Until then, Rev. Francis J. Boland, who had left his post as dean of Notre Dame’s College of Arts and Letters at age 47 to serve as a Navy chaplain, had been only an observer. Now his work took on a grim reality.

He bent over stretchers to comfort grievously wounded Marines, to whisper prayers, to hear confessions, to administer Last Rites. “It was an awful sight,” Boland wrote to his superior at Notre Dame, Rev. Thomas Steiner, “so many arms and legs blown off, and hands and deep flesh wounds from the shrapnel of the Jap mortars. It was surely a bloody scene. Four boys died, one of whom had his face practically blown off and another kid with the side of his head shot in, although he was still conscious when they brought him aboard.”

At daybreak on February 20, Boland again watched the combat, describing the scenes in vivid detail in a letter to a friend addressed only as Henry. “The island was literally bristling with fire from our guns, pill-box fire from the Japs and also antiaircraft barrages. Last night the Japs sent up flares to locate our boys in their foxholes and then poured heavy, devastating mortar fire into them.”

Once the stream of wounded again inundated the transport, Boland returned to his duties. In his unflinching dispatches from the front lines, he noted the youth and devastating injuries the Marines suffered. “One big, powerful young fellow, nineteen years old, had the back of his head nearly shot off.”

On February 23, the chaplain witnessed one of the most iconic events of the Pacific war when a handful of Marines lifted the stars and stripes on Iwo Jima. “This morning at 10:40 the national colors were raised on the top of Mount Suribachi by some Marines who had made their way to the summit. The flag never looked quite so good to me before.”

Welcome news that Highlands was leaving Iwo Jima came later that day when the captain announced the departure for Saipan in the Marianas Islands to transfer casualties to military hospitals. “A great shout went up from the crew down below. It is indeed a welcome relief for us to leave these dangerous waters and the scene of this hard battle, but the poor Marines will have to stay on and fight day and night until the island is secured. They deserve all the credit and all the sympathy that can possibly be given to them. There are tough, bloody days still ahead for all of them.”

An interlude on Espirtu Santo in the New Hebrides, due east of Australia, ended on Palm Sunday, March 25, when Highlands pulled out of the harbor toward the next battle destination — Okinawa. On April 10, Highlands anchored off Tsuken Jima to land troops on the small island a few miles from Okinawa’s eastern coast. By then the battle on Okinawa was in full bloom, with U.S. Army infantry joining the Marines.

As American cruisers and destroyers bombarded the target, Boland sensed that this landing might be more difficult than expected. “We could see the shells from the Jap shore batteries and mortars splashing in the water around our boats as they approached the beaches. There were many Jap snipers on the island and machine gunners with extraordinary accuracy of aim,” he wrote to Steiner, noting that five Highlands men had been killed in the fighting.

The soldiers told Boland that the Japanese were well-entrenched and skillfully used hundreds of mortars and machine guns to make the invaders pay a heavy price. “All in all,” he continued, “it was a costly little operation, although the news reports represented it as trifling. Some of the boys who got killed were out here for over three years and this presumably was to be their last invasion. For them and their families, the price was pretty high.”

Boland’s war intensified with the appearance of Japanese kamikaze aircraft, which had sunk 10 ships and damaged another 33 during the first 10 days in April. Over the next few days he stood, in effect, on a giant bull’s-eye.

His first taste of this specter occurred when two kamikazes attacked as Highlands moved around Okinawa to a post off the city of Naha. While anti-aircraft guns from multiple ships downed both planes before they smashed into their targets, one barely missed the stern of a vessel near the Highlands. “This was our introduction to Naha and Okinawa,” Boland wrote to Steiner. “It was evident that we were in for some hectic days and indications were not wrong.”

If anything, Boland understated the case. For five days in mid-April, the Highlands crew was called to General Quarters — meaning they had to man their battle stations — several times each day. On April 15 they witnessed what Father Boland called “the most exciting spectacle that we have yet seen.” Three kamikazes, eventually splashed by American fighter aircraft and ships’ anti-aircraft guns, raced uncomfortably close to the Highlands.

Every ship in the harbor and numerous American guns ashore opened fire at the intruders. “The noise was deafening. It was an amazing sight to see one of them hit in mid-air and spiral down in flames, causing a great explosion when it landed on the shore. Shortly after, another was shot down, hitting the shore, and then a third came tumbling out of the skies and landed in the water near a ship, making a great splash.”

Additional kamikazes returned a few hours later. “Again, all of the ships in the harbor from the big battle wagons to the smallest craft, opened up with their guns and the scene was almost indescribable. The whole sky was literally aflame with tracer bullets and exploding shells. At one moment the firing was directly over our ship and shrapnel was falling all over the decks.”

His Okinawa ordeal ended April 16, when Highlands departed, first for Saipan, then on to the Philippines, far from the active combat zone, where the American military had already begun training exercises to prepare the troops for the planned assault of Japan. Boland said Masses aboard three ships each afternoon and heard hundreds of confessions, but enjoyed leisure time each night.

After the United States’ use of two atom bombs, Japan surrendered August 15. The end of the war “has brought a great relief to the men out here in the Pacific,” Boland wrote to Steiner, “although the tension of the past few years still remains to a considerable degree.”

Boland expected to be home by December, but the chaplain’s division asked that he remain in the service to help soldiers and sailors with their transition back to civilian life in the United States. He remained a military chaplain until 1947, retiring as a captain and returning to Notre Dame before serving for six years as president of Stonehill College.