The battle was a lightning strike of massive ferocity, two great armies converging blindly on the unassuming hamlet of Gettysburg, Pennsylvania, during the first three days of July 1863. The numbers are too large to comprehend: More than 160,000 armed men, exhausted after a month of marching, lined up to face each other along the two gently sloped, grassy ridges that frame the farmlands for miles south of town. By Independence Day, almost 51,000 foot soldiers, cavalry and artillerymen — nearly the number of American soldiers killed during the Vietnam War — would be dead, wounded or missing. 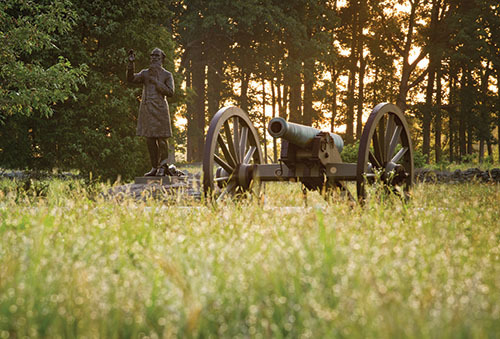 On this bright June morning, as joggers and bicyclists glide past the 8-foot bronze statue of Father William E. Corby, CSC, it is impossible to picture any of it or to understand how our national life once collapsed so destructively. We’re on Hancock Avenue, a slender asphalt strip that the National Park Service maintains along Cemetery Ridge where the Union made its victorious stand. Across the road, marble regimental monuments alternate among gleaming iron cannons pointed westward, like Corby’s reverent gaze, at the ghosts of the Confederacy.

We have come to remember, some 250 of us. Most are members of the Notre Dame Club of Gettysburg. Others, like University President John I. Jenkins, CSC, ’76, ’78M.A., have come from farther afield. In nine days’ time, park rangers expect, these hills and meadows will be covered with hundreds of thousands of people who will honor the 150th anniversary of the Battle of Gettysburg.

This is sacred ground. The men felt it; Lincoln knew it; and Father Corby believed it as an article of faith. We’re here to pray the Mass, to reflect on the legacy of this place and to bless once more the memorial erected a century ago to honor a priest made famous by his courageous work of mercy. For Notre Dame, the sesquicentennial commemoration of the Civil War’s defining battle begins today.

My interest in this period in American history dates back to my childhood. Anticipating the Gettysburg milestone along with millions of others, I’ve spent months watching films and reading such books as Michael Shaara’s Pulitzer Prize-winning novel, The Killer Angels, and already spent a full day touring the battlefield with my three oldest sons, trying to grasp what happened here. While I think I could carry on an intelligent conversation about the war and the unfolding of this battle, I cannot connect to the grim reality of it. To quote from Ken Burns’ 1990 documentary, The Civil War, this “most ordinary of places” played backdrop to “the greatest battle ever fought in the Western Hemisphere.” On neither point is this hyperbole.

Father Corby’s statue, depicting him with right hand elevated to bless the troops and absolve them of their sins, bids us to imagine the situation in which this slight Holy Cross priest and Union army chaplain, a war veteran still three months shy of his 30th birthday, found himself on the afternoon of the battle’s second day. What’s missing are what he saw and heard, the smoke and the blood and the shattering earth and the long ranks of men who fought here. Lost in the tall grasses and tour groups that circulate in everything from cars and charter buses to candy-colored, three-wheeled roadsters and Segways are the soldiers who fought over liberty and union, slavery and states’ rights, incompatible economies and ways of life — too many giving their lives in unfathomable suffering.

How had it come to this? 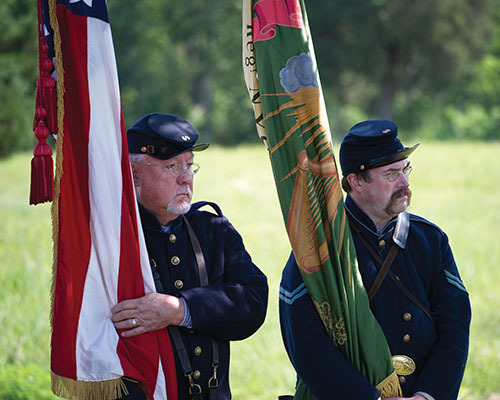 Yesterday I walked with my boys through some of the battlefield’s best known hotspots, noting their picturesque names. The mightily contested Peach Orchard, where premature fruit, emerald green and hard as stones, still drops from a new planting of trees as a living symbol of hope and memory. The Wheatfield, where hundreds more of Corby’s brothers from the already decimated ranks of the Union’s Irish Brigade fell within minutes. Then on to Plum Run. Devil’s Den. Little Round Top. Sites of moving heroism and staggering carnage, all. I made a checklist of their dangers in 2013: Ticks, poison ivy, a few crumbling footpaths and the carefree children who dart into traffic between the cars parked along those narrow lanes.

This morning the Notre Dame group arrived by yellow school bus like kids on a field trip and stepped out into the heat of the first full day of summer. We sit now in rows of white plastic chairs as motorcyclists and pedestrians slow down to indulge curiosity. Father Corby’s statue is off to the left of the altar. Behind it, in the shade of a solitary tree, stand Pat Gaughan and Gary Ryan of the 69th New York State Volunteers Historical Association, representing the Irish Brigade in Union blue and guarding the regimental banner and a period American flag with 34 stars.

For the newcomers’ benefit, John Murphy ’55, the Gettysburg Club’s founding president, offers background on the battle and tells his own story of walking past the Corby statue years ago. Each time, he says, he’d see a rosary draped over the hand or flowers laid on the boulder beneath the feet. Back then, Park Service records showed no official Notre Dame commemoration since Father Theodore Hesburgh’s visit with former President Dwight Eisenhower at the national centennial celebration in 1963.

So Murphy thought he should do something, and in 2004 the Alumni Senate approved a new club that would go on to honor “the spirit of Corby” primarily through projects that support soldiers, veterans and their families. The club today is “90 percent subways” he says, indicating the traditional “subway alumni” who, like current club president Jennifer Krumrine, love the University but do not hold a Notre Dame degree.

As it happens, June 22 is the Feast of Saints John Fisher and Thomas More, the English martyrs executed in 1535 for their defiance of King Henry VIII, so Father Jenkins and his concelebrants wear red vestments. In air sweetened by birdsong and freshly cut grass, it is not hard to agree with the premise of his homily. We think of God’s presence in good moments of peace, joy and consolation, he says. Here at Gettysburg, we remember God’s mercy on soldiers in their hardships and loss. If we, like them, can look for God in our trials, we can be witnesses to faith, the original meaning of “martyr.”

In closing, the choir from Annunciation parish in Hanover, Pennsylvania, leads us in singing “Faith of Our Fathers,” which our program describes as a favorite hymn of Irish Catholic soldiers in the Union army. Jenkins unvests and steps to the podium to deliver a more direct reflection on the battle and Father Corby’s famous role in it. 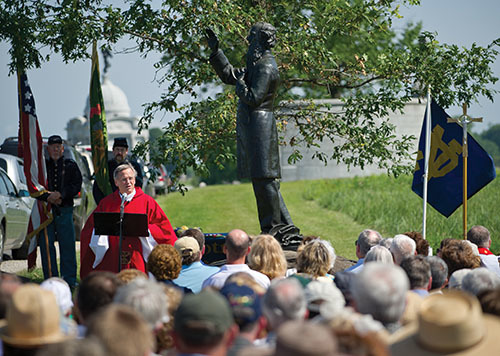 He begins with the familiar story of Corby requesting permission to address the men as the Confederate artillery opened fire and the Union officers prepared to charge. Quoting from Corby’s Memoirs of Chaplain Life, he invites us to meditate on the scene as Corby preached a speedy sermon, raised his hand and prayed over a host of kneeling men.

Many of us close our eyes. For the first time, I think, I’m able to see the day.

“‘My eye covered thousands of officers and men,’” Jenkins reads. “‘I noticed that all, Catholic and non-Catholic, officers and private soldiers, showed a profound respect, wishing to receive at this fatal crisis every benefit of divine grace. . . . [My] general absolution was intended for all . . . not only for the brigade, but for all, North and South, who were susceptible to it and who were about to appear before their Judge.’”

Besides being the future Notre Dame president’s own account of the defining moment of his life, Corby’s passage describes the first visit to Gettysburg by a past, current or future Notre Dame president. Obviously, it was not the last. Father John W. Cavanaugh, CSC, came in 1910 to dedicate the statue and returned three years later to pay his respects at the 50th reunion, when the white tents of Union and Confederate veterans dotted the meadows like so many doves.

Fifty years ago, echoing President Lincoln’s Gettysburg Address, Father Hesburgh asked Americans to reflect upon the “unfinished business” of freedom at a time when the vote and other basic civil rights were still being denied the descendants of slaves.

Today, in his remarks, Father Jenkins has chosen to focus on Corby and asks whether the fighting at Gettysburg was even necessary. “His is the only statue on this field of battle erected to a man who had no weapon,” he says, his amplified voice echoing off a stand of trees. “He earned a reputation for bravery without firing a gun. He stood for mercy in the midst of war.”

Corby, he notes, returned to Gettysburg in 1888 to mark the battle’s 25th anniversary and spend time with companions he had not seen since the war. Invited to address the survivors of the Irish Brigade, Corby later remembered how he “got on reasonably well” then faltered as he said, “Here is what is left of us; where are the others?” He could not speak for several minutes. The men wept. Corby later wrote that war “should be resorted to only after all other means have been tried, tried again, and in vain.”

The Civil War, Jenkins continues, decided “a profound moral principle,” ultimately vanquishing an institution that was “unconscionable and indefensible,” but the killing and destruction “led to poverty that would last a century and wounds that would last even longer.

“And if there was a better path, what was it?” 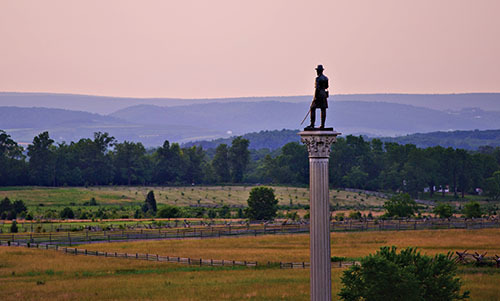 Corby’s life and character, he says, hint at an alternative. Telling another story from the Memoirs, Jenkins describes Corby’s encounter soon after the battle with a devout Southern Catholic whose prominent family had built the parish church in her small Virginia town. Making no secret of her Confederate sympathies, the woman nonetheless gave the priest an altar stone and baked hosts to replenish his kit. In Corby’s account, they soon parted as friends “united in holy Faith” that even war could not dispel.

“He was a man of clear convictions. He was dedicated to action. Yet he could also recognize the deeper bonds that unite us with those on the other side,” Jenkins says. Corby’s acquaintance with this Southern widow, Mary Matilda Jenkins Semmes, led to a postwar friendship with her family, whose members included a Confederate commerce raider, a Union gunboat commander and a brigadier general from Georgia who had just died from leg wounds he received at the Wheatfield, fighting opposite Corby’s comrades in the Irish Brigade.

“If others had Corby’s moral imagination, I believe the brutal and bitter resolution of this conflict could have been avoided,” Jenkins says.

“This is the message of the silent dead of Gettysburg: There must be a better way to resolve our conflicts than the one that played out on this battlefield and in this war.”

Turning from the podium, Jenkins walks to the statue and plants two small flags into the soft turf, one for America and one for the Irish Brigade. A Boy Scout troop passes by on foot, taking interest as we sing the “Battle Hymn of the Republic,” and Jenkins places a wreath of blue and gold carnations bearing the logo of the Notre Dame Club of Gettysburg at Corby’s feet.

As a bugler plays taps, Jenkins steps back, his hand outstretched as if reflecting Father Corby in a mirror, to bless once more the statue that captures his predecessor’s gentle manner.