I was 22, and we were sitting on the front porch of our hotel looking toward the wide West Texas plains. We could see a storm on the purple horizon. Dark clouds gathered over this mystical Trans-Pecos territory, hushed, dusty and devastatingly full. There seemed to be more air, more sky, more lonely beauty than I knew what to do with. And the storm that was gathering seemed more storm-like, the lightning more vivid, more crudely yellow than anywhere else I’d ever been.

He watched with fascination, eagerly looking forward to spending the evening observing the ragged storm play out over the big sky. I watched with fear. “Can’t we go inside?” I said. All I could see was the lightning striking the dry ground and a wildfire starting miles away in the dry scrub brush. I saw the disappointment in his eyes. “Couldn’t we just stay out for a few more minutes?” The wildfire made it to me in seconds, was licking at my worn sandals. “I need to go.” I ran into the hotel to hide under the futile cover of sleep in our hotel room, protected from nothing and pretending, flimsily, that the four walls were enough to hold out everything.

They say fear is an instinctive response to danger in front of you and anxiety is merely the ability to project fear into the future. All of us to some degree are anxious, are able to turn our knowledge of the world and its many possibilities into sweaty palms and feverish nightmares. 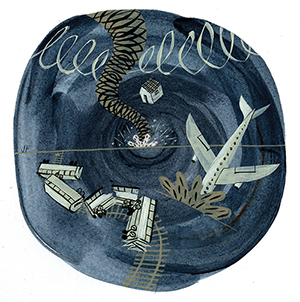 Some of us, it turns out, are more skilled than others. It wasn’t always this way, but these days I pass from fear to anxiety to fear, buoyed on deceptively gentle waves. I read the side-effects list of my common antibiotic and contract meningitis. When the Q-train passes over the East River on the Manhattan Bridge, I close my eyes and sway, clenching my friend’s hand. By the time we enter Manhattan, the train has fallen off a dozen times. The 2-train stops under the river, and I watch the water rush into the broken tunnel in front of me. The ferry crossing the bay capsizes, and suddenly I’m in the icy Penobscot trying to swim toward shore. The plane tumbles out of the clouds onto the waiting Illinois cornfields below. I come home particularly late after a day of work and am mugged by the man in the parking lot. On a road trip through Oklahoma, a tornado appears in front of our beat-up Corolla, savagely taking up the road with nowhere for us to turn. The world falls apart and then falls apart again.

It feels invasive. I’m communing with the world in a way that I don’t remember asking for. And if it seems to you like this would be hard to write down, to acknowledge to my still-tremulous self that leaving the house every day is a battle, that sometimes I lose that battle, that I can’t look people in the eye on the street, that life is a series of small negotiations and large compromises, that most days I feel incurably selfish, then you would be right.

When I was young, my parents were told many times that I was high-strung. The damning legacy of that term has only now caught up to me. It is perhaps too obvious to note how quickly, in public discourse, anxiety becomes hysteria becomes excessive becomes female becomes alien becomes worthless. “Stop being crazy,” I whisper to that Medusa inside. But she doesn’t stop, I can’t control her, and I’m left weary from the fight, from the inside and the outside of it, from telling myself to pull it together and from telling others that I already have. I’m young, and that is certainly part of the problem. As much as I and others my age pretend it isn’t, the world is still new to us. Still keeping many secrets, still unspooling its shadows, still ready to surprise. The machinery of daily life is still becoming sharper, clearer, more terrifying. Who repairs the tracks? Who routes the trains? Who keeps us from crashing?

It has taken two years, but I now see a therapist once a week in a breezy, second-floor room. We talk about mindfulness, about breathing, about rhythms, about routines, about possibly starting yoga, about my past, about acceptance. It’s pleasant, but I can’t tell yet how it will end. Treating anxiety as illness still makes me uncomfortable, guilty somehow. Every Friday I go, but every Friday, for a moment, I think about walking straight past the green Victorian with gray shutters, continuing ever forward into the mouth of the monster. Into this thing, this world, blooming ferociously in front of me.

Rachel Roseberry’s essay won first place in this magazine’s 2013 Young Alumni Essay Contest. The author is in her second year of service as an AmeriCorps member at Notre Dame’s Robinson Community Learning Center, where she works with the Youth Development Programs.