Old Sturbridge Village in Massachusetts, with its re-creation of a rural 1830s New England town, is a popular tourist destination. But after Alika Hope Bryant ’99 visited the living history museum, she emailed its managers this comment: “You don’t have a lot of black history stuff.”

Sometimes a nudge is all it takes. The June 2013 music and art weekend at Old Sturbridge Village included soprano Alika Hope, accompanied by guitarist Ramon Morant, performing traditional African-American spirituals and discussing the history of the songs. 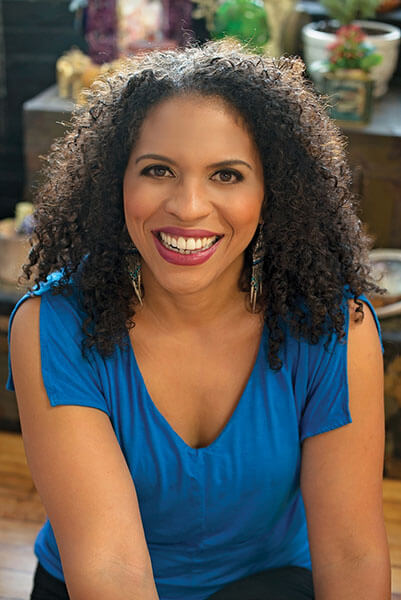 The mix of entertainment and education to tell the story of slavery in America and the anti-slavery efforts of whites and blacks is the foundation of the Ray of Hope Project. Launched by Hope and Morant after that 2013 performance, the agency now features more musicians and customized workshops that can include discussions of today’s social issues.

“Doors still keep opening,” says Hope, president and CEO of the company whose clients include museums, schools and libraries. In fact, Ray of Hope musicians and actors were invited to perform yet again at Old Sturbridge Village during its June 2016 Freedom Week.

Exploring issues of race in America is not new to Hope, the daughter of a Caucasian mother and African-American father. “I was teased by both sides but also supported by both sides,” says the educator and performer who learned spirituals from her father and paternal grandmother.

“My mother said I sang before I talked,” says Hope. Other interests followed. “I loved studying people and cultures,” she says, so she switched from studying music at Notre Dame to sociology. She also added a minor in dance through Saint Mary’s College and embraced another passion, teaching, by earning a master’s degree in early childhood special education at Teachers College, Columbia University. Hope, who grew up in Oregon and now divides her time between Hartford, Connecticut, and New York City, has a resume that includes teaching at various East Coast schools and at Borough of Manhattan Community College, interspersed with gigs as an opera singer, actor in children’s theater and co-host of a local TV show in Connecticut.

The Ray of Hope Project evolved from her background and love of teaching and performing. “Music is really relatable,” she says, and using spirituals and social justice songs as a springboard to present America’s racial divisiveness can make an audience feel more relaxed. She also sees music as a reassuring way to connect with schoolchildren. Children in a bullying reduction workshop, she says, felt less threatened by the topic when it was introduced through the lyrics of the civil rights protest song “A Change Is Gonna Come.”

Education is not the only goal of the Ray of Hope Project, whose motto is “Feel the music, change the world.”

“I am a firm believer in action,” Hope, 41, says. “What are you actually going to do to effect change in the world around you, in small and large ways? Without action, hope doesn’t generally mean anything.”

Making a difference, she explains, can involve anything from buying a granola bar for a homeless person to participating in “honest conversations.” In fact, talk among workshop participants about race and social justice issues is encouraged. “If we don’t talk about it,” says Hope, “I really do think we’re going to implode.”

A recent undertaking, the release of the album Hope for a Motherless Child, may expand the Ray of Hope Project’s reach. It features both classic renditions and new arrangements of African-American spirituals, interspersed with readings of historical speeches by Sojourner Truth, Abraham Lincoln, Frederick Douglass and William Lloyd Garrison. The “tour of history through jazz, opera, rap, and gospel” already has garnered a Mom’s Choice Gold Award for the best in family-friendly media and a Global Music Award gold medal.

Such recognition also speaks to what Hope wants to offer her two children, ages 6 and 9. “I have to leave a legacy for them of hope and promise.”