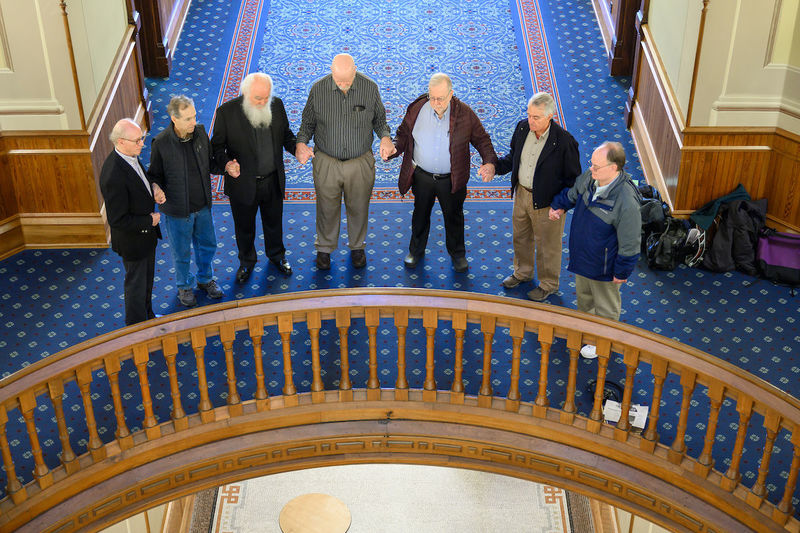 Members of the Notre Dame Ten and their supporters pray in the Main Building 50 years to the day after their sit-in led to the only invocation of Father Hesburgh's “15-minute rule.” Photo by Barbara Johnston

Fifty years to the day after 10 Notre Dame students were suspended for their actions protesting the Vietnam War, three of the men returned to campus to reflect on that era and its place in history.

The visitors, who walked the campus and participated in a series of commemorative events on November 18-19, were Mark Mahoney ’71, John Eckenrode ’72 and Chris Cotter, all now in their early 70s.

Mahoney, of Buffalo, New York, said he has no regrets about participating in the sit-in or the subsequent penalty. “For a lot of us, it changed our lives.”

The case of the so-called Notre Dame Ten drew national attention during the civil unrest and anti-war protests of the late 1960s. It was the first and only time that the famed “15-minute rule” instituted by Rev. Theodore M. Hesburgh, CSC, then the University’s president, was invoked: Student protesters who disrupted operations or infringed on the rights of other students would be given 15 minutes to reflect and desist. Those who refused would face possible removal and immediate suspension or expulsion.

On November 18, 1969, job interviews were being held at Notre Dame by Dow Chemical Company and the CIA. A Michigan-based firm, Dow Chemical made napalm, an incendiary gel used by U.S. troops as a weapon in Vietnam. Student activists had planned a repeat of a protest held the previous year during CIA and Dow Chemical interviews.

This one would play out far differently. As the protesters stood or sat around the doorway of the interviewing office on the third floor of the Main Building, the Rev. James Riehle, CSC, ’49, ’78M.S., then dean of students, invoked the rule and informed the activists that they had 15 minutes to desist.

Fifteen minutes later, Riehle asked for and received the ID cards of 10 students. Five were suspended and five were expelled, although the expulsions were later changed to suspensions. The group came to be known as the “Notre Dame Ten.”

The 10 students who forfeited their IDs served their suspensions. Seven later returned to school and completed their degrees.

Eckenrode, of Ithaca, New York, recalled how he had become increasingly troubled by the Vietnam War and Notre Dame’s involvement in it. “I felt this was an opportune and necessary time for action,” he said of the sit-in.

He said he made the decision to block the doorway knowing what to expect. “We were fully aware of it. We knew exactly what was on the line,” he said.

“You can imagine that call home,” Eckenrode said of notifying his parents of his suspension. His father, Edward, was a 1944 Notre Dame graduate and World War II veteran.

The sit-in and subsequent suspension formed a significant part of his education, Eckenrode said, noting that events outside the classroom can be as important for college students as what they learn in class.

Because of his suspension, Eckenrode finished his degree a semester late. He went on to graduate school at Tufts University, earning a doctoral degree in psychology, and recently retired after 36 years as a professor of human development at Cornell University, where much of his work focused on the prevention of child abuse and neglect.

Fifty years after the sit-in, Eckenrode is encouraged by some developments at his alma mater, such as the establishment of the Kroc Institute for International Peace Studies and the hiring of faculty who teach nonviolent conflict resolution. “But I also see a vigorous ROTC program on campus and other signs that ties to the military-industrial complex are alive and well,” he said.

Without the Vietnam War and the sit-in, Eckenrode thinks he would have had a more typical undergraduate experience. “The war called for a different approach,” he said.

Mahoney had hoped to attend the University of Chicago Law School, but said he wasn’t admitted when the school learned of his suspension. Instead, he earned his law degree from what was then the State University of New York at Buffalo and went on to a long career as a criminal defense attorney.

The goal of the sit-in wasn’t to keep the CIA and Dow recruiters out, Mahoney said. The protesters wanted the recruiters to participate in a campus forum and answer students’ questions about their hiring and practices.

Cotter, a resident of Urbana, Ohio, said that when he enrolled at Notre Dame as a freshman, his hope was to earn a degree that would lead him to a comfortable job and allow him to join a country club, play golf and associate with the “right people.” The Vietnam War and classes he took in Christian ethics changed all that, he said.

Learning about the killings of civilians in Vietnam by American troops, he grew opposed to the war and American actions in Southeast Asia. Cotter said he went to the Main Building that day with a goal. “I was going to block the door [to the placement office]. I went with that intent in mind,” he said.

Cotter was readmitted to Notre Dame but soon dropped out. He got involved in peace activities, earned a degree at Ohio State University and became a physical therapist.

He said he doesn’t know how his life would be different if he hadn’t participated in the sit-in. “I don’t think about that,” he said. “I just think about trying to live a gospel lifestyle every day.”

During their visit to campus, Mahoney, Eckenrode and Cotter were joined by two other figures from the sit-in and its aftermath: the Rev. Emmanuel Charles McCarthy ’62, ’63M.A., ’68M.A., a former Notre Dame professor who helped craft the defense for the 10 men during the disciplinary process; and Carl Estabrook, at the time a Notre Dame history professor who also supported them.

McCarthy in 1969 was an attorney and a faculty member who had founded Notre Dame’s Program for the Study and Practice of Nonviolent Conflict Resolution. He resigned his position that December in protest over the students’ treatment. (In 1981, he was ordained a priest in the Melkite Greek Catholic Church.) He said the students hadn’t deserved suspension or expulsion, because they weren’t advocating violence on campus like anti-war protesters were at some other universities.

“There was no viciousness, anger or hostility,” McCarthy said. He argued that Dow Chemical and the CIA were symbols of war and atrocity, and that the student protesters had raised legitimate questions regarding the Catholic Church’s teachings on warfare, and whether American involvement in Vietnam was morally acceptable.

Estabrook said by the time the sit-in took place, polls showed that 70 percent of Americans disapproved of the war.

“I had just begun teaching at Notre Dame,” Estabrook said. “My teaching contract was not renewed after two years. I left not by choice.” He attributes that decision to his support for the Notre Dame Ten. He subsequently taught sociology at several other universities, retiring from the University of Illinois in 2008.

In 1969, anti-war protests were taking place at campuses across the country. Some turned violent, and in some cases police responded with tear gas. The previous year, the nation had lost three voices for peace: the Rev. Martin Luther King Jr., Robert F. Kennedy and the Rev. Thomas Merton, the widely read Trappist monk and scholar.

At an outdoor “resistance Mass” at Notre Dame in October 1969, two professors and several students had torn up their military draft cards, a federal offense. The sit-in at the Main Building occurred three days after a moratorium march in Washington, D.C., that drew more than a half-million anti-war demonstrators.

Hesburgh had sent a letter to the campus community announcing his 15-minute rule nine months before the sit-in. The letter received widespread news coverage, and the priest was applauded nationally.

Members of the Notre Dame Ten have convened for previous milestone anniversaries of their protest. During this 50th anniversary visit, the three men gathered with some classmates and the former professors. They walked up the front steps of the Main Building, then climbed another set of stairs to the third floor. They stood by the rotunda railing and together said a prayer near a door marked Room 309, the office where the recruiters had met with student job-seekers.

Later in the day, the men recorded a video interview in a campus studio about their memories of that era, then attended a Mass. In the evening, they spoke in the Eck Visitors Center, reflecting on the sit-in and subsequent events to an audience of about 35 people.

The next day, two of the visitors described their 1960s campus experiences to students in American studies Professor Peter Cajka’s The Vietnam War and American Catholics course. Senior Andrew Fuller said it was the first he’d heard of the Notre Dame Ten. Although the sit-in was a half-century ago and the Vietnam War ended long before he was born, Fuller said the guest speakers brought the era alive for him. “Hearing from them and their perspective made it very real,” he said.

While Hesburgh’s rule was only invoked that one time, du Lac, which contains the student code of conduct, today states that the University may dismiss a student for “serious disruption of University life.”

Coincidentally, on November 17, a group of students staged an overnight sit-in in Stanford Hall against parietals and hate speech. They were confronted by a rector and campus police officers and told they faced potential expulsion if they didn’t leave a residential hallway, The Observer reported. The protesters eventually dispersed, but conducted another sit-in a few nights later in Sorin Hall and indicated that they planned to continue their efforts.