Juniors are rare in Italian culture. The first-born male is customarily named after the paternal grandfather, and the second-born male is named after the maternal grandfather. My oldest brother hogged the name of both of our grandfathers, Robert and Edward. Robert, at age 3, successfully lobbied my parents to name their second son Steven, after The Six Million Dollar Man character, Steve Austin. Three years later, my father, Vincent, wanted to give me his name, and my mother acquiesced. 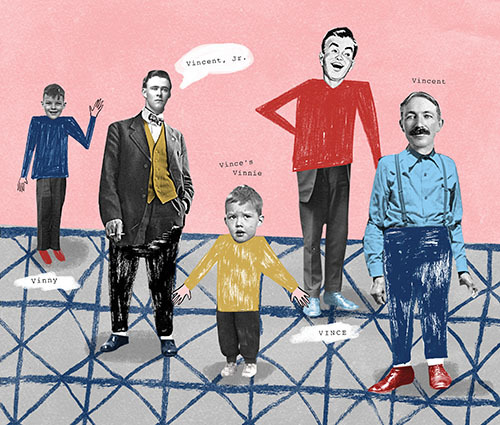 Disappointed as my mother was to have a third consecutive boy, she refused to call me Vincent. She didn’t want to yell “Vincent” and have two people come running — or have two people ignore her, as the case may be. So although legally named Vincent DeGennaro, Junior, I was J.R. to my family. My mother always says that she saved the name for the correct son, and I’ve been trying to live up to the name since I was born.

I was swaddled in a blanket at Saint Vincent’s Hospital in lower Manhattan when my 33-year-old father first held me. I wonder what he hoped I’d become when I reached his age. He’s been successful throughout his professional career as a surgeon, leading every organization he’s ever been a part of, and his shadow cast especially large for me since I shared his name. Most of my life I have spent trying to become an independent person, separate from my father, but the older I get the more I understand what it is my parents gave me when they named me after him.

Vincent, from the Latin vincere (to conquer), is a family name to a nauseating extent. My great-grandfather, my grandmother’s and grandfather’s brothers, my dad’s first cousin, two of my dad’s cousins’ children, one of my dad’s cousin’s grandchild and now my nephew are named Vincent — 10 Vincents in four generations. To distinguish one Vincent from another in conversation, medieval forms of nomenclature predominate — “Vincent, son of Betty,” “my Vincent” or “your Vincent.” At family gatherings, when somebody says “Vinnie’s Vinnie” or even “my Vinnie’s Vinnie,” everyone knows the exact person being named.

Being J.R. to my family, I never entered into the Vincent carousel. In school, friends and teachers called me Vince. My father’s family and childhood friends referred to him as Vinnie, so again I sought to set myself apart from him by using Vince instead.

At 13, I chose Saint Anthony as my patron saint for my Catholic confirmation. My mom later told me that my father had also chosen Saint Anthony. So my first choice as an adult in the eyes of the Church was to unwittingly follow in my father’s footsteps, naming myself after him yet again.

Perhaps I became a doctor to follow in my father’s footsteps, a junior mimicking the senior. I had wanted to be a doctor since I was old enough to read, and his example may have demonstrated what defines a man as successful. One of my earliest memories of interacting with the medical community was when my father took me into New York City with him to proctor an exam for the surgery residents. I assume that it was a practice board exam, but all I remember is the large wooden table and the smoothness of the lacquer. The two-hour exam was an eternity for my 5-year-old brain, but I dutifully sat at the end of the table, book in one hand and Matchbox hot rod in the other, tracing the table with the plastic wheels of the tiny car. I have no recollection as to why my father brought only me to the test, or what made him think a 5-year-old wanted to sit through a surgery board exam, but I like to think it was his prescience that I was going to follow him into medicine.

Thirty years later, I still feel weird being called Dr. D. — Dr. D. was always my father. Whenever he brought me to his office, I shuffled quickly alongside him, unable to keep up with his rapid pace. The nurses would smile and say, “Hi, Dr. D. Is this your son?”

People outside of the family think that I followed him into global health, but in reality I followed him into the profession and he followed me into medicine abroad in 2004. Several times after the earthquake in Haiti 2010, we volunteered together with Project Medishare, originally sleeping on the cold ground together four days after the quake, and then at the large tent hospital two months later. A baby was born in the tent hospital while we were there in March and the mother named him Vincent (pronounced Ven-son in French) after his father of the same name. As is our narcissistic custom with gatherings of Vincents, we snapped a picture of the four of us together in one photo — two proud fathers and two sons still wet behind the ears.

I intentionally left the “Jr.” off of my high school and college diplomas. At that point, I saw the “Jr.” as diminutive, a pejorative addition to an otherwise proud name. “Look how cute Junior is!” some might say as they pinch the cheeks of a boy with suspenders and knee-high socks. My dad, indifferent to semantics, never mentioned the omissions.

By the time I graduated from medical school at 28, I had warmed somewhat to the idea of proudly carrying my father’s full name, and that diploma is emblazoned with the “Jr.” Similarly, the first few academic papers I published were simply as Vincent DeGennaro. After the earthquake in Haiti, my father and I jointly published several papers. Since the first two authors couldn’t be “DeGennaro, V., DeGennaro, V.” without causing confusion, we added “Jr.” and “Sr.” as distinguishing markers. In every paper that I have published since, with or without him, I’ve kept the “Jr.” In the dozen years from graduating high school to our first joint paper, I went from J.R. only to my family to publicly and permanently being branded as “DeGennaro, V. Jr.”

Since moving abroad full time, first to Rwanda in 2011 and then to Haiti in 2012, I’ve started introducing myself as Vincent. Practically speaking, friends and colleagues who speak English as a second or third language have a more difficult time understanding “Vince” because the word begins and ends with soft consonants, but also because a form of Vincent exists in every European language. As my career in medicine blossomed, my subconscious chose the name of the doctor I respected most.

Perhaps most importantly, the “Jr.” or “Sr.” barely matters any more. The longer we work together at Project Medishare in Haiti, the more my father and I blend together in thoughts and words. I inherited his rough edges and brutally honest tongue, but he has mellowed with advancing age, accelerating the maturation process for me by passing on his wisdom. The quick temper and constant vocal opposition of my fading youth has been tempered by his advice and guidance. I no longer swing at every pitch, content to let the small grievances pass unmentioned, saving the protestations for what is truly important to me. I like to think that in shaping me as an adult, he’s reconciled some of the mistakes he made as a younger father. Now, when I hear “Dr. D.” in the hospital, I stop turning around to look for my father; he’s already there.

“You’re a lot further along in your career than I was at your age,” he said to me late last year over lunch at his hospital in Miami. His hair, jet black well into his 40s, is now mostly gray, but his hazel eyes retain the passion of youth.

“You had three children already at my age,” I told him. Then, thinking of Isaac Newton’s maxim, added, “I’m standing on your shoulders — I’m here because of you.” He offered a soft shoulder shrug and an eyebrow raise, coupled with a slight smile — about as emotional as an aged-softened Vincent DeGennaro gets.

Vincent DeGennaro, an internal medicine doctor and a global public health specialist at the University of Florida’s Division of Infectious Diseases and Global Medicine, works half-time in Haiti with the nonprofit Project Medishare. He blogs regularly at magazine.nd.edu.