Antonio Simonetti is a geologist by training, a chemist by trade and a Notre Dame associate professor of civil and environmental engineering and earth sciences by title. “But you can think of me as the CSI person on TV,” he says.

The geologist/chemist uses laser-based instruments to measure isotopes, the nuclear variations of a chemical element, to determine how and where rock formed. But geologic history isn’t the only secret he unlocks.

Using “isotopic tracer techniques,” Simonetti has helped a police department “fingerprint” a gun involved in a murder investigation, matching the spent bullets to residue in the gun barrel. Skipping through time, he’s also helped archaeologists identify the origin of copper artifacts and pottery in North America, and figure out whether the mummies found at a burial site in southern Egypt were of native people or of those who had migrated there. 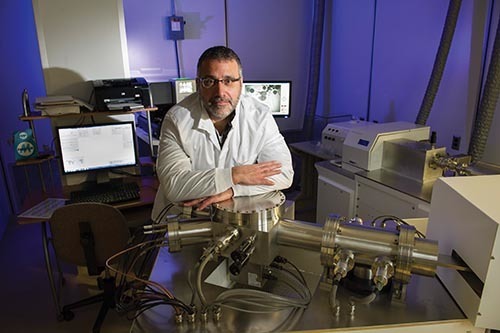 His latest crime scene investigation may be his most important. This past fall, Simonetti and colleagues Peter Burns, a geology professor and director of Notre Dame’s Energy Frontier Research Center, and Amy Hixon, an assistant professor of geology, received a grant from the Department of Homeland Security to develop a database of uranium’s isotopic signatures, the unique ratio of isotopes in each sample.

Uranium ore varies worldwide — uranium mined in North America, for instance, will have a different ratio of isotopes than uranium mined in Asia. That variation offers a unique signature or fingerprint to identify the material, Simonetti explains. And Hixon is examining such things as how exposure to water and air change the various uranium ores over time and what impact that has on their isotopic signatures.

Knowing the signature is key, Simonetti says, because it can reveal not only where the uranium ore originated but also where the material, which is used in nuclear weapons, was processed. “Because of the way uranium is separated in the weapons manufacturing process, the isotope composition is known by every nuclear-producing country,” he says. “So once it’s measured and matched, there’s no denying [the source].”

Normally, any work involving nuclear weapons is top secret, conducted by a government laboratory. This research is intentionally unclassified to serve as a warning to malicious or careless producers and illicit traffickers of nuclear materials. It also provides Homeland Security with a tool to identify the source of any nuclear material that rogue states or terrorists might smuggle into or use to threaten or attack the United States. The International Atomic Energy Agency has recorded nearly 2,500 trafficking incidents reported by participating countries since 1993.

“It’s a way for the U.S. government to put any would-be aggressor on notice,” Simonetti explains. “It’s a way to say to the bad guys, ‘Look at this. We have this expertise of deciphering nuclear-weapons material. So if you try to attack us, we will know where the bomb components were mined and manufactured, whether in North Korea, Iran or wherever, and we can take appropriate action.’ Hopefully that knowledge will serve as a deterrent.”

The uranium database project is a continuation of earlier nuclear forensic research by Simonetti and Burns. Previously, at the behest of the National Nuclear Security Administration, the pair worked to develop forensic methods to identify material generated in a nuclear blast.
The Notre Dame researchers studied trinitite, a radioactive substance composed of the melted sand and other material formed from the world’s first atomic bomb blast in 1945 at the Trinity test site near Alamogordo, New Mexico. “The idea was to pull trinitite apart chemically and isotopically to show people that we can identify signatures of the bomb within this relatively simple geologic background,” Simonetti says.

Like the current project, that research was intentionally unclassified in the hope that it, too, would serve as a deterrent.

John Monczunski, a freelance writer, was for many years an associate editor of this magazine.