Late one spring when I was 7 or 8 years old, I graduated from fishing on the little lake near my family’s cabin in northeastern Michigan to fishing on the mighty Au Sable River about 15 miles north. My fishing buddy was my mom’s father, Dziadzia Romie. Dziadzia (pronounced Jah-jah) is the Polish word for grandfather, and his first name was Roman, but everyone called him Romie. 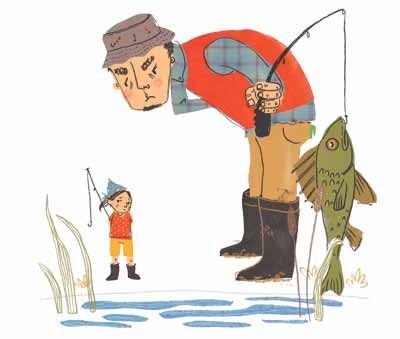 We set out early in the morning and drove through the Huron National Forest past Lumberman’s Monument and Iargo Springs before turning north along Route 65, crossing the Au Sable below the Five Channels Dam where we’d put our boats in. Dziadzia Romie and I always fished from one rowboat while Dad and my older brother fished from another. After we loaded all the fishing gear, life preservers, and coolers filled with pop, and baloney and ham sandwiches, Dad and my brother motored downriver to their favorite fishing holes while Dziadzia and I drifted with the current until we saw what looked like an inviting spot.

We fished most of the morning before it started to rain, hard and cold, so Dziadzia steered us to an island where we could stay dry under some pine trees. Once the rain let up a bit, he built a fire, which I marveled at, never expecting it was something any grown-up I knew could or ever would do.

As the smoky fire sputtered and hissed to stay alive in the smothering dampness, things started to shift as if somehow a tiny crack had splintered the universe. Adventure started to seep in. I began to feel like I was Daniel Boone or Davy Crockett — two of my favorite heroes who had not only opened this country but had opened my exploring heart to the thrilling possibility of living in the woods, sleeping under the stars and discovering what might be around the bend.

It wasn’t just their depictions on Sunday night’s Wonderful World of Disney that had captivated my imagination years before but a pervading sense that I was actually a kindred spirit, a belief that reverberated deep throughout my very being down to my size-4 Keds and had been an integral part of me for as long as I could remember. And here we were in the wilderness, in hostile Indian territory perhaps, struggling for our very survival against the elements! Oh, where was my coonskin cap when I really needed it?

It got even better: Dziadzia scrounged up some wire mesh to put over the fire and began cooking the fish we’d caught that morning. Other than marshmallows, I’d never had “real” food cooked over an open fire before. The bluegill and perch Dziadzia grilled tasted fresh, so different from the frozen cracker-meal coated wedges that Mom typically fried in a pan on Lenten Fridays. I thought it was the best fish I’d ever eaten until then and, truthfully, ever since.

Afterward, we took our time relaxing on the island, walking around just to see what was there. We had never taken this kind of break from fishing before, and everything felt so crisp and alive. And it was amazing how different the river looked from that grounded perspective as it glided past us in its seemingly half-smiling, unhurried centeredness, as if it had always known who it was and where it was going.

Later, as night began to fall and it became too dangerous for a boat without running lights to be out on the river, we all returned to shore. As we unloaded the boats, Dad hoisted a teeming wire basket full of fish over his head and gloated, “Okay, who caught the most? Who caught the biggest?” My stomach began to sink as if it had sprung a leak. I didn’t know it had been a contest. I didn’t know I was going to be graded.

When my grandfather told him that we had pulled onto an island when it started to rain, built a fire and cooked some fish, Dad raised his eyebrows and snorted, “Well, I guess we know who the real fishermen are.” For a few brief seconds, I couldn’t imagine why anyone would rather huddle under a plastic poncho for eight hours during a driving rain, bailing cold water out of the bottom of a rowboat with an empty Maxwell House coffee can in one hand and death-gripping the handle of a spin-casting rod with the other. Fishing apparently was serious business.

Dad shook his head, his disapproval continuing. “I thought we came to fish,” he said, and I knew I had committed a major sin of omission as that prickle of shame behind my belly button itched higher and higher along my rib cage. My grandfather just shrugged his shoulders and cracked open a Stroh’s, but I thought I caught the word loser in my dad’s expression as he turned away to finish unloading his boat.

I had seen that look before. You see, my grandfather liked his beer a little too much and hung out at pool halls a little too often. Occasionally he’d disappear for days at a time to who knows where, causing my mother and grandmother to worry and my dad to just shake his head. But Dziadzia was always kind to me. Before I could read, he was the one who read me stories when I climbed into his lap. He was the one who taught me how to properly hold a pool cue. And at Sunday Mass, he was the one who took the time to translate the priest’s sermon from Polish into an English I could understand. He was my buddy in so many ways, but all that evaporated when I saw the look on my dad’s face.

It no longer mattered that Dziadzia had been the one who had taught me how to bait a hook with a worm years before. It didn’t matter how right our time on the island together had felt and how it had resonated in some deep authentic core with me. What mattered most was that look in my dad’s eyes and my fear of not measuring up, of guilt by association. So, not caring that Dziadzia was within earshot, I stammered out the suggestion to my dad that, you know, the next time maybe we should switch fishing buddies — you know, mix things up a little — but his reply struck like a muskie devouring a minnow: “Oh, no. Partners have already been set.” My brother just looked at me and smirked. Tainted already.

In the ensuing years on summer holidays Up North, I continued to fish from the same boat with my grandfather, albeit — I’m ashamed to say now — in a rather hangdog, resigned sort of way. And I don’t know if I was more embarrassed for him or for me — for having bailed out on him, for having bailed out on myself. Because from then on, whenever Dad would invariably challenge, “So, what’s the bet?” I, like some Charlie McCarthy dummy, would hear myself mouthing someone else’s wooden words and rise to take the bait. With a set jaw, I would load my fishing gear into Dziadzia’s boat, then fume while he futzed with his tiny, ancient motor as Dad gunned his 7-1/2 horses around the bend downriver and out of sight.

I can’t recall ever returning to that island on which my grandfather and I had our little adventure. Even when it was raining. Even just to take a break and eat our ham and baloney sandwiches. We mostly stuck to fishing all day from our cramped little rowboat. I was on a mission.

Looking back on that eddying time in my life — a time when I was too young and too hungry to realize what I was being pulled into — I can’t help but feel this snagging sense of loss, a murky kind of grief, for allowing some tender, inner fingerling to slowly start slipping through my grasp back then, flip-flopping along the weedy edges of my heart, laboring to breathe in silent, mouth-gaping gasps.