Equipped with a knapsack of notebooks, three changes of clothes and a camera, this summer I boarded a plane headed from LaGuardia to Sittwe. Waiting at that airport on the other side of the world was Pulitzer Prize-winning journalist Nicholas Kristof and the aftermath of the 2012 riots in Rhakine State, Myanmar. Thanks to my successful entry in a New York Times’ competition, together we reported on an ethnic conflict that has forced the Muslim minority known as the Rohingya into 21st century concentration camps and turned Buddhist authorities into the unlikely proponents of genocide.

Overnight I went from covering Fighting Irish football to a humanitarian crisis in Myanmar.

Worth my weight in gold

Three years of attendance at Notre Dame as a journalism student will confer on anyone a number of invaluable benefits. Among my most prized are an insatiable hunger for the written word, newfound competency for separating laundry and a huge bride price — no less than five cows. 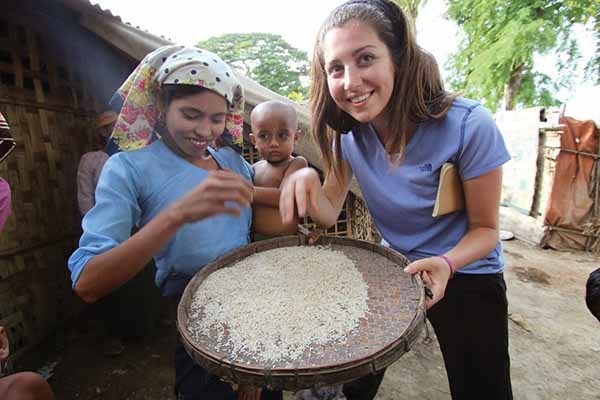 At least this is what I am told in the remote village of Yae Thay.

“At least five cows,” the 20-year-old mother of two says, her laughter buried in the forehead of the toddler balancing on her left hip. “Maybe 10.”

Sajan nods once. “Yes, because you are educated.”

Sajan quit school in fifth grade after her father died. Wedded to a fisherman at age 13, she was offered for the bride price of one cow. The obvious comparison sits uncomfortably on my chest.

Sajan is a beaming, sociable young woman. Surely she is worth five cows, too. I erase the thought from my mind, deciding that more than just cow inequality is making me uneasy.

A sarcastic voice breaks the silence. “Okay, sold!” Beside me, a pale man adjusts his drawstring safari hat, grinning. “Five cows? You can take her!” Even his jeers somehow manage to come off as warm and well-intentioned.

The man is Kristof, the New York Times columnist whose passport could be mistaken for a pocket bible. For the past week, we have traversed Rhakine State. Our days are filled with visits to displaced Muslims and Buddhists. The former group is confined to internment camps and isolated communities. Without access to healthcare or higher education, Muslims in western Myanmar are refugees in their own country.

The next village we visit is Buddhist. Their bride price offer is in gold.

“Because you are very smart,” a man sitting on his porch tells me, “you are worth a lot of gold.”

Nick glances over at me, straight-faced. “I think we’ll go with this village. A much better offer.”

It’s a tempting proposition for someone who comes from an institution that reserves gold for Mother Mary and football helmets.

A man trails me on his motorcycle, pleading with our translators to let me meet his son.

“Nick, do you think we should tell people that I’m not actually looking to get married?”

It is clear that education is my biggest asset when it comes to negotiating a bride price, but I stop asking strangers my “worth” when I realize not all teenagers in Myanmar can attend college. As of 2012, it is nearly impossible for members of the Muslim minority to enroll, a result of restrictions enforced by the government. Without state-issued identification cards, Muslims in Myanmar occupy a second-class citizen status that is not afforded the luxury of a university education. More shocking is the number of Muslims who do not make it to elementary school, an all-too-common fate for aspiring students in western Myanmar.

“If I go to university,” 18-year-old Tin Aung Lay tells me, “they will shoot me with a gun.” He folds his hands, flexing his pointer fingers in the shape of a pistol. Suddenly I am no longer thinking about cows or gold.

One hundred credits at a renowned university begins to wear differently in the blistering heat of the Myanmar sun.

To reach the outskirts of the Muslim refugee community, Yae Thay, we must spend a morning plowing through endless rice fields, saluting Myanmar soldiers adorned in AK-47s and navigating bridges that resemble bamboo tightropes.

Nick easily balances his way across each makeshift overpass, while reassuring me that I’m “much more likely to get hurt in a car accident than by falling off a bridge.” I pretend to find this comforting.

At the first sign of village life, I rest my camera on a broken water well and peer into the viewfinder, rotating the lens clockwise until a group of brightly clad children sharpens into focus. Their hesitant stares suggest the youngsters are still deciding whether to be intrigued or terrified by the alien contraption pressed against my face. One of the toddlers shrieks, and I quickly hide the camera, turn off the flash and remind myself that no picture is worth the torment of a small child. 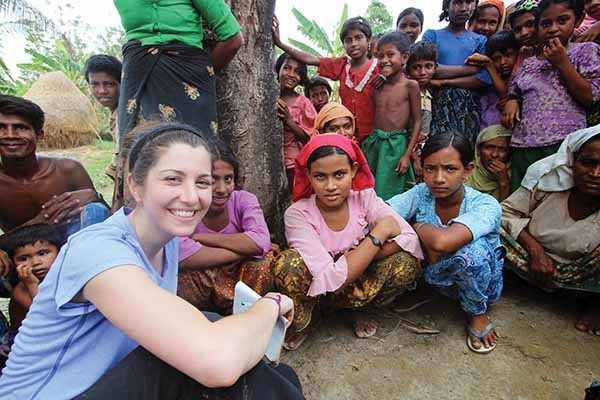 Turning the lens around, I crouch down to show off the photo I have taken. Giggling with delight, the kids take turns pointing to one another, then back to the camera screen. For many of them without mirrors, it is a rare moment to witness their reflection.

The last photo I snap features a resigned-looking boy, no older than 5 or 6. He wears an oversized orange T-shirt as a dress, with English lettering that reads “High School” on the front. I cannot help but wince at the sad irony.

The boy cannot read his native tongue, let alone the foreign words. When fierce fighting between Buddhists and Muslims broke out here in 2012, more than 60 people died, many of them Muslim kids hacked to death. Since the violence began, the local Buddhist school in the neighboring village forbids attendance of Muslim students from Yae Thay.

The small boy in the bright “High School” shirt may never see his first day of kindergarten. I lower my camera.

“What do you want to be when you grow up?”

Silence. Oo Than Ngwe cocks her head to the side. Her young eyes shift from me to the translator, a Myanmar man fluent in English.

“She does not get it,” the translator, Wai Moe, says.

“I’m asking what she wants to be in the future. What are her hopes and dreams?”

“Okay, but I don’t think she will understand.”

Wai Moe furrows his brow before spitting out a question in Burmese.

“Can you ask what she wants to do for a living one day?” I plead with him.

He nods. Oo Than Ngwe is hesitant. She gestures to the small open-air coffee and snack bar next to her home.

“I would like to keep a shop one day,” she says.

Satisfied, I move onto a different question.

The next day, my same inquiry is again greeted with silence. Interview after interview, the speechlessness becomes a haunting ritual of sorts. The more I ask, the more I comprehend.

“What are your dreams for the future?”

Finally, Wai Moe turns to me. “The girls — they do not understand. No one’s ever asked them what they want to be when they grow up.”

Every day on our extreme road trip, Nick uses a shaky satellite to connect to the Internet and painstakingly downloads the newspaper onto his laptop. On one of the final days of our journey, I make an effort to read articles over his shoulder in our bumpy van. Having gone days without reliable Internet, it seems as though I’ve gotten behind on the news while reporting it. My eyes flicker from headline to headline.

Quickly, my mind leaps to the media whirlwind I left back at home — scenes of war and conflict splattered across the front page: guns blazing, enemies battling, a row of body bags aligning. This is the blood-stained news we spill our morning coffee over as we read of unspeakable death tolls.

Reporters who dodge bullets to write history’s first draft put their lives on the line to bear witness to society’s hiccups. Armed only with a bulletproof vest (sometimes) and a pen, these correspondents function as the lifeblood of journalism.

But what happens after the bullet wounds heal? What about the innocent victims — women, children, families — who are left to pick up the pieces alone? Is it right to leave their stories untold?

Early on, I had asked Nick about his goals for our travel to Myanmar. He explained to me that in many ways it is our responsibility to “shine a light on genocide, malnutrition and some really important global topics.” Myanmar is a place that has seen its share of darkness over the past few decades. “This light could be lifesaving,” he added.

Nick closes the laptop, grabs his notepad and slides open the door of the van. I grab my backpack and fasten the lens onto my camera. Pausing for a moment, I wonder about Sajan’s village and whether or not Tin Aung Lay will ever attend college.

Nick calls back to me in the van: “You ready?”

Today, I will ask at least three girls what they want to be when they grow up, I think.

The camera switches on with a click. Suddenly, it feels as though I am turning on a flashlight.

Nicole Sganga, a Cold Spring Harbor, New York, resident, is a double major in film, television and theatre, and political science. She was the 2014 winner of the “Win a Trip with Nick” contest, whose prize was traveling with New York Times columnist Nick Kristof to the developing world to raise awareness about global poverty.