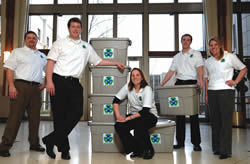 Should you find yourself outside the glass doors of Room 234 at the Mendoza College of Business, you’d better watch your step. This is the Gigot Center for Entrepreneurial Studies, and things can happen pretty fast around here.

Just ask Sheila Powenski and the management team of MedXCycle LLC, a startup company that will collect donated surplus medical supplies and sell them at a fraction of their original prices to healthcare providers in underprivileged countries.

In August, 2007, the firm’s co-founders were getting acquainted as first-year MBA students. In October, Powenski won $500 and top honors at Gigot’s first “elevator pitch” competition, in which 24 students took turns at a simulated, two-minute encounter with a prospective investor to convey their business idea.

As the spring semester advanced, the newly incorporated company entered negotiations for warehouse space, made business presentations at local outpatient clinics and sought its first sale. Mark Hubbard ‘72, the group’s mentor, has no doubt the company will bring its eventual investors a solid return.

“It’s an easy concept to understand, but growing it—and growing it well—is going to be important for them,” says James H. Davis, director of the Gigot Center.

A former reserve goalie on the Duke University women’s lacrosse team, Powenski can handle the fast action needed for the company’s expansion.

The idea and teamwork behind MedXCycle can be traced to her experience as a varsity athlete, too. She and a teammate noticed all the unused gear the squad’s corporate sponsors showered upon them. When her friend joined the Peace Corps in Honduras and Powenski started her career as a project manager at General Motors, they linked up to gather sporting goods and deliver them to needy communities in the poor Central American nation.

Powenski brought her love of sports and social uplift with her to Notre Dame. With an eye on the social-venture segment of Mendoza’s annual business plan competition, she took her concept to Hubbard. Along with Michael Vogel ‘65, he is one of Gigot’s two inaugural entrepreneurs-in-residence.

Naturally, Hubbard, a corporate development consultant, made a few suggestions. One was to shelve the sports stuff in favor of medical supplies. He mentioned Intervol, a Rochester, New York-based nonprofit founded by Dr. Ralph Pennino ’75 that focuses on healthcare outreach programs, including one that recovers medical overstock and sends it to caregivers in impoverished countries.

Bottom line—times three
Similarly, MedXCycle will measure its success with what its principals call a triple bottom line. Beyond turning a profit, the company hopes to expand the purchasing power of hospitals and clinics in the developing world and will return a percentage of its income to donor organizations for charitable work in their own communities. As a bonus, the transactions will relieve landfills by keeping out discarded medical supplies—everything from bandages, syringes, surgical instruments and latex gloves to larger equipment such as incubators, beds and IV stands—at least until after they’ve been put to good use.

Powenski says a lot of medical waste is generated through the use of kits that contain the items most commonly used in certain procedures. As much as 40 percent of the supplies in some kits is trashed, either because health regulations prevent restocking items or because labor costs are prohibitive. U.S. hospitals still pay stiff disposal costs to get rid of an estimated 4.8 billion pounds of medical waste each year. Of the 200 million pounds that are still usable, she learned, nonprofit organizations like Intervol only reclaim an estimated 3 to 5 percent.

While medical nonprofits target the world’s poorest countries, Powenski adds, organizations in middle-tier nations could take a leap forward in the quality of their care if they could buy the same supplies at, say, a 90 percent discount.

“We want to expand because of the possibility that’s out there and how many lives can be improved,” says MedXCycle co-founder Anita Allen. “It creates a sense of urgency for us to get out there and do this as quickly as we can.”

Gigot’s Davis says the right combination of skills and leadership are among the keys to entrepreneurial success. Allen, a former U.S. Army hospital administrator and Olympic pentathlete, brought her experience as a nonprofit consultant. Christopher Ziener built up an award-winning software firm, then joined the Marines and led an infantry platoon through two tours in Iraq. Brendan Cooper, Christopher Wittman and Michael Powers chip in their respective know-how in marketing, emergency medicine and public policy, and business journalism.

Hubbard calls them a “dream team.” He has worked with students for years as an “Irish Angel,” one of about 260 alumni dedicated to mentoring and networking with (and sometimes investing in) the next generation of ND entrepreneurs. Davis says the large size of the Irish Angels network and its educational focus gives the relatively small Gigot Center its educational reach. He believes the angels help students encounter market reality sooner and climb the learning curve faster than peers at other schools.

Hubbard has given these students more than just good advice. He put them in touch with Phil Newbold, the CEO of South Bend’s Memorial Hospital, who brought in his staff to brainstorm a partnership. Memorial pledged MedXCycle’s first equipment donation.

Powenski & Co. took advantage of a crush of opportunities to promote their project and sharpen their plans. They spoke to the senior executives enrolled in the college’s Executive MBA program and even skipped out on houseguests before the Duke football game to fill in for a speaker who had canceled on the Dr. Tom Dooley Society, a group of alumni in the medical profession founded by Hubbard’s son, Matthew ’02.

She discovered that South Bend itself was an asset. It has some of the cheapest warehouse space in the United States (60 to 80 cents per square foot compared to as much as $2.40 elsewhere) and its proximity to deep-water ports along Lake Michigan and such major cities as Chicago, Detroit and Indianapolis makes it the “perfect” business hub.

Hubbard often hosted the students’ meetings in his home, where his wife, Bridget, a Saint Mary’s alumna, added her expertise as a former corporate marketing executive.

“There’s not one Notre Dame grad in the bunch,” Hubbard says, “but I’m happy to tell you they’re all going to be Notre Dame grads in a year and a half because they’re really smart [and] they have their hearts in the right place.”