It was Senior Day at Notre Dame. As 80,000 faithful supporters rose and made their cheer, senior players emerged one by one from the hallowed Stadium tunnel, into loving family embraces and into Notre Dame lore.

For all the pre-game tears, Notre Dame gave the hometown crowd a sendoff of their own as the Fighting Irish shut out the Wake Forest Demon Deacons, 38-0.

On Notre Dame’s first drive, quarterback Everett Golson launched a downfield strike to senior Theo Riddick for a 24-yard advance. On the very next play, Golson adroitly triggered an option to senior Cierre Wood, who bolted 68 yards down the sideline for a touchdown and Notre Dame’s longest run play of the season.

Golson re-entered and teamed with Wood to drive the Irish down the field. When Golson missed on his first lobbed pass to senior captain Tyler Eifert, Golson simply lofted another to the big tight end for Golson’s second touchdown of the day.

Six times Everett Golson connected with his towering tight end who galloped through tacklers for 85 yards like a blue-and-gold Percheron. Eifert finished the game with 130 career catches, surpassing Ken MacAfee as the most prolific tight end in Notre Dame history. 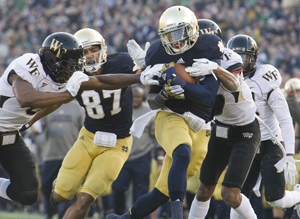 For most of the afternoon, Golson maneuvered like a point guard and threw like a missile launcher. He did loosen his grip when, after a 27-yard pass to agile senior Robby Toma and a 14-yard pass to Eifert, Golson threw an end zone interception to Allen Ramsey II. But Golson recovered with a third touchdown to artful senior TJ Jones and another successful drive leading to Kyle Brindza’s field goal. By the time Tommy Rees temporarily relieved Golson in the third quarter, Brian Kelly’s ascendant starter had completed 20 of 30 passes for 346 yards.

Notre Dame’s offensive line was simply outstanding, and graduate students Braxston Cave and Mike Golic Jr. were adamantine. Brian Kelly must be hoping their senior compatriots, Zack Martin and Chris Watt, will return with their last eligible year to shield Golson’s blind side.

As for senior captain Manti Te’o, what can better express the Notre Dame family’s love than tears of joy? Thousands of students proudly wore yellow and white leis in admiration of their fellow student as Te’o, last of all the seniors, emotionally embraced his parents before the game.

When Brian Kelly called a timeout early in the fourth quarter, he gave Motta, Lewis-Moore and Te’o a fitting curtain call. One by one, each senior bounded off the field to thunderous applause, fighting back tears as they accepted the bittersweet finality of their final home game.

As season’s heroes exited, Kelly called to the stage the unheralded seniors and walk-ons who have served as scout teamers and backups for four years at Notre Dame. This is the true hope of any Senior Day — a volley cheer for every senior on the roster — and Kelly’s players thanked him with a frigid bath of something greener than champagne.

Later in the night, the South Bend celebration peaked with gusto as former leaders Oregon and Kansas State bowed to their underdog opponents. The Fighting Irish prepare their siege of unmighty Troy amid a chorus of rejoicing. For the first time in nearly 20 years, Notre Dame is #1.

As the star-spangled banner snapped brightly above a ceremony for veterans of both the gridiron and the battlefield, one must ask: For whom do the echoes awake each sublime Saturday afternoon?

Yes, they beckon greats like Riddick, Toma, Eifert, Martin, Lewis-Moore and Te’o. On a campus graced by bronze statues of priests, coaches and Moses himself, Rockne’s apostles will always await golden-helmeted heroes of the fall.

But every hero needs a loyal band of brothers ready to charge into the breach. So the echoes also call for players like Charlie Fiessinger and Nick Fitzpatrick and Dennis Mahoney. They are among the sturdy immigrant sons who, for 125 years, have blocked and tackled in anonymity for Notre Dame. Theirs is a true Notre Dame legacy: nameless fighters who tough through snow and mud and sweat and blood to bear aloft a tiny but audacious Catholic university from the snowy banks of Saint Mary’s Lake to the beating heart of America.

Their names are unknown. Their faces are not famous. They are the Fighting Irish.

Together, as one, the echoes awake for them.

Michael Rodio, who was this magazine’s spring intern, writes for the Daily Domer, a Notre Dame Development Office website. Contact him at mrodio@nd.edu.