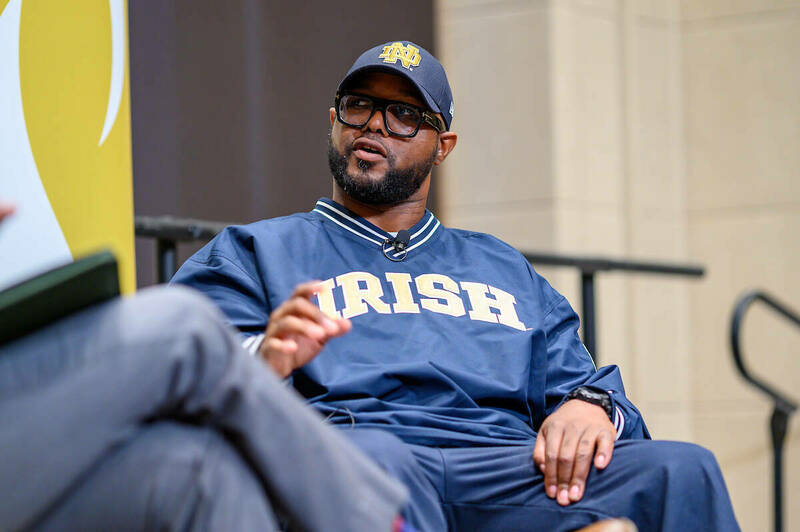 “I will not be able to do the work that I need to do . . . if I harbor that hate.” Terrence Floyd, speaking at Notre Dame. Photography by Matt Cashore ’94

Terrence Floyd has forgiveness in his heart for the former police officer who murdered his half-brother, George Floyd, in Minneapolis in May 2020.

George Floyd was the 46-year-old African American man who was killed by white police officer Derek Chauvin, who placed a knee on Floyd’s neck during an arrest. As George Floyd was dying, he said, “I can’t breathe,” which became a rallying cry during racial justice rallies across the nation.

“A lot of people wonder why, but I forgive Chauvin,” Terrence Floyd said Wednesday, October 6, during a talk at Notre Dame. “Do I like what he did? No. But you know what? I will not be able to do the work that I need to do and make the change that I need to make for my culture, for this world, for my community, if I harbor that hate.”

Floyd said he was able to forgive because he’s a Christian. “Forgiveness is not for the person, it’s for you,” he said. “When I realized that, that’s when I found it a little bit easier to forgive.”

Floyd said the nation needs to continue working toward racial justice. “I don’t see us being where we need to be, but I see us getting there,” he said. “Some progress is better than no progress.”

Terrence Floyd and George Floyd grew up far away from each other, and Terrence recalled finally getting the chance to meet his elder brother at a family baby shower in about 2016.

He was immediately struck by how much George looked and sounded like their late father, who died in 2002. After meeting, the two brothers talked often. “We talked and talked. We bonded. I had that big brother I always wanted,” he said. And then George was taken away.

Njamo asked Floyd what the white community needs to understand about the relationship between the Black community and law enforcement.

Floyd was asked how to reach those with opposing viewpoints who don’t want to change.

He also encouraged African-Americans to look at their own actions.

“Keep your focus. Act like you got some sense and change yourself, one by one, and make your community stronger,” he said. “If we’re walking around, listening to the latest rap songs, got our pants down off our butts, wearing do-rags (cloth head coverings) and stuff, not even paying attention, not even knowing our rights, not knowing anything about our history, they can overtake us.”

Terrence Floyd is a board member of The George Floyd Memorial Foundation Inc., a nonprofit organization aiming to build a just and equal society and end systemic racism. He is also founder of We Are Floyd, a Brooklyn-based nonprofit that honors the life of George Floyd through community service and leadership.

Floyd’s visit was hosted by Notre Dame Student Government and the University’s Klau Center for Civil and Human Rights, with support from the Office of Multicultural Student Programs and Services.

Floyd said he is inspired by the memory of his father and brother to continue his work. “I’m going to continue to fight because they would want me to,” he said. “They need me to. I’m still here. I’m still standing. I’m still strong.”