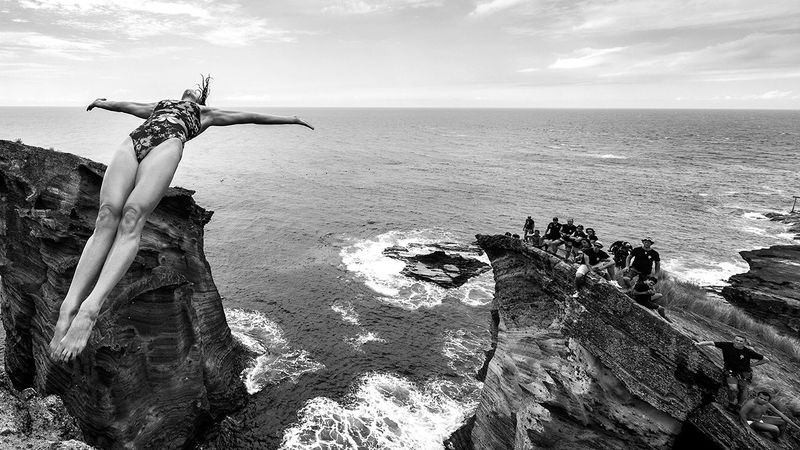 As she approaches the rubber-clad platform 65 feet in the air, Tara Hyer-Tira ’08 visualizes her dive one last time. She’ll jump headfirst, twist her body into a series of tight tucks and then slide almost silently into the lapping blue water. Down below, four rescue divers are treading water, agitating the ocean top so she can see her entry point. An emergency backboard and a jet ski wait a few feet away, just in case. Heart pounding, Hyer-Tira sucks in one last deep breath, leaps into the air and lets gravity take over. She’ll fall six stories in three seconds, traveling around 55 to 60 miles per hour when her toes break the water’s surface.

Cliff diving isn’t like most other extreme sports, because it’s both breathtakingly beautiful and completely terrifying. Sort of like base-jumping meets Cirque du Soleil. Female professionals jump from 20 meters (twice the height of the tallest Olympic diving platform), which means hitting the water wrong can feel like slamming into a slab of concrete. Not a bad tradeoff, in Hyer-Tira’s eyes, for scoring the chance to fly. “It’s exhilarating, it’s freeing and there’s honestly nothing really like it,” says the former Notre Dame women’s diving team member, who has spent the last four years competing in the Red Bull Cliff Diving World Series. Hyer-Tira has plummeted from platforms in Norway, Mexico, the United Arab Emirates, Portugal and Italy; one of her most memorable jumps was out of a medieval castle into Lake Garda near Malcesine, Italy.

“There’s usually spectators and crowds, but when I’m up there in these naturally beautiful environments I can zone it all out and just really feel lucky for a moment,” she says. 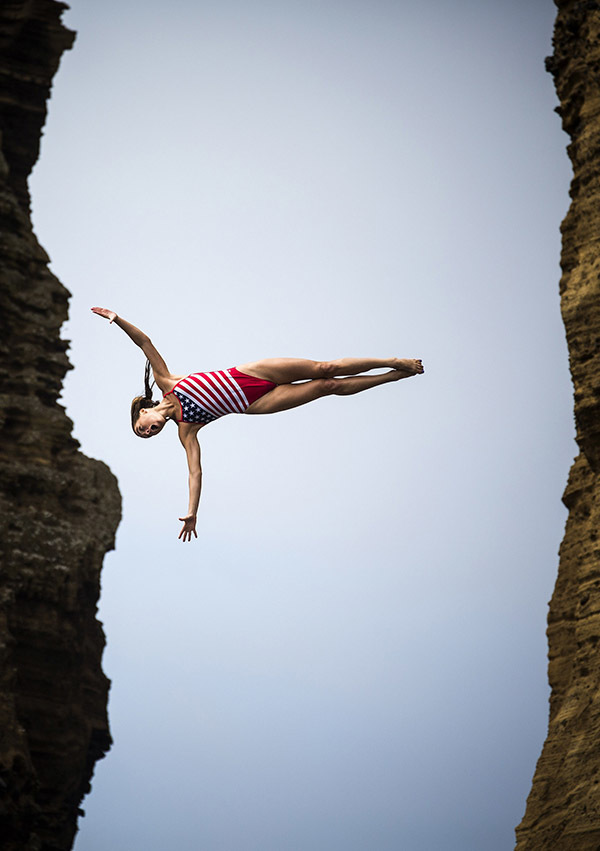 That’s not to say Hyer-Tira is cavalier about her dives. The margin for error is so small that pulling out of a somersault a second too late could be the end of her career. Cliff diving is brutal on the body, which is why divers always land feet first — smacking the water headfirst could lead to a concussion, busted lung or dislocated shoulder, among other issues.

While most divers don’t even begin practicing the extreme sport until they’re in their late 20s, Hyer-Tira’s first taste of crazy high diving came a little earlier, when she agreed to take a gig as a “flyer” at SeaWorld San Antonio the summer after graduation. “We’d do four or five shows a day and play with the springboards, bungees and trapeze, but I really loved the Russian Swing.” It’s the kind of contraption you might see at the circus — two or three “pushers” use their weight to build momentum, and when the swing reaches a high point the flyer launches off the edge like a cannonball.

“I’m on the smaller side, so they’d really give me the juice and I’d go 15 meters in the air,” she says. Hyer-Tira’s swing skills got her invited to her first cliff diving competition, which she won, and a few years later she traded beluga whales and Pacific dolphins for a coaching role at Stanford University, where she also trains four days a week.

Prepping for those high-flying moments isn’t easy — the divers have to practice their dives in pieces, since pools max out at 10 meter platforms, then stitch them together when they reach the competition. In a testament to how risky and technical the sport is, the pool of professional cliff divers around the world is so small that Hyer-Tira’s been one of just three or four women at some events. But it’s the camaraderie among those few crazy enough to continue diving that keeps her coming back.

“It’s so rare that athletes from all these different countries respect each other and get along, but we’re all genuinely rooting for one another,” she says. They’re all holding out hope that cliff diving could become an official sport at the 2020 Olympics in Tokyo. Until then, though, Hyer-Tira is happy just to be floating on air 65 feet above the sea.

Kristen Dold is a freelance writer and editor living in Chicago.