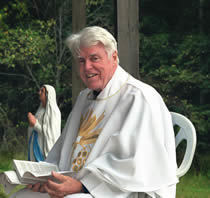 Jim Flanagan has had two constants in his life — an appreciation for the power of teamwork and an abiding relationship with Our Lady.

Flanagan, born May 29, 1924, in Jamaica Plain, Massachusetts, played for Coach Frank Leahy on three national championship football teams in the 1940s and entertained thoughts of joining Leahy’s staff as an assistant football coach after graduation. But just prior to graduation, while staying with his parents during a break, he felt a calling to the priesthood, so he left Notre Dame and entered Saint John’s Seminary in Brighton, Massachusetts.

“Coach Leahy said to me, ‘Jim, I’m going to miss you very, very deeply,’” Flanagan says today. “He said, ‘Working for God is the best, Jim.’”

Flanagan’s primary reason for coming to Notre Dame wasn’t to play football, however. It was to grow closer to the Virgin Mary. “I saw Notre Dame as a school of Our Lady,” he says. “My relationship with her is the way of my life.”

During Flanagan’s childhood in Boston, he and his parents and four siblings had prayed the rosary together regularly. And whenever they took road trips, either to visit family in New York, to check the sights in Chicago or to see shrines near the Canadian border, they would pray the rosary in the car.

Still, in some ways, Flanagan, now 86 years old, has always been a coach. However, instead of shaping the lives of young men on a football field, he’s led teams of people working for peace and trying to do God’s work in the world.

Attending the seminary back in his home diocese, Flanagan discussed his possible future paths with his spiritual director. “He directed me to go to different communities to see if that was where God wanted me,” Flanagan says. But what Flanagan soon realized, he says, was that the Virgin Mary wanted him to do something new. The young priest felt compelled to start an order that would be called the Society of Our Lady of the Most Holy Trinity — SOLT.

After being ordained in 1952, Flanagan got the blessing of Archbishop Richard Cardinal Cushing of Boston to start the order to initially serve in the American Southwest. Officially founded in 1958 and approved by the Vatican as a Society of Apostolic Life, the Society of Our Lady of the Most Holy Trinity is now headquartered in Corpus Christi, Texas. Today SOLT has missions in 16 countries, including England, the Philippines, Thailand, China, Belize, Guatemala, Haiti and Mexico.

What makes SOLT different from other orders is the focus it places on teamwork. Ecclesial teams, composed of priests, deacons, brothers, sisters, and single and married laity, form the basis of community life and provide the core of mission staffing. That’s different from the way things had been done in the church, Flanagan says of other missionary orders. “They worked as individual missionaries in various missions throughout the world,” the priest explains. “They didn’t have the concept of teamwork.”

In addition to his days on football teams, Flanagan also experienced the value of teams when in the military. He enlisted on Pearl Harbor day, December 7, 1941, and served in the U.S. Navy during World War II. He was part of an underwater demolition team (UDT) that worked to clear the Normandy beaches of mines in preparation for the D-Day invasion.

“They didn’t have time to dig up the mines,” Flanagan recalls. “[A]ll those men on the beaches, they asked the UDT, ‘You go kick the mines, blow yourself up, and we’ll drive a wedge right through the beaches.’”

When it was noted that Flanagan was one of only three to survive that mission, he declined to talk about the experience in detail. “I was in a different area; that’s what I’d say,” he offers. “I don’t like to talk about war. It’s terrifying.”

Later in the war, Flanagan was stationed at Subic Bay, a naval base in the Philippines. One day, he says, he pointed up to the mountains near the base and asked his fellow soldiers to accompany him with food and medicine to help the children there who were starving and in need of medical care. And so they went, sailors and Marines as well as medics and chaplains from the base. “They loved going up there, and they did great, great work,” Flanagan remembers.

Father Mike Jordan, SOLT, ’68, says Father Flanagan was a strong and patient leader during the rocky years of the society’s beginnings. As the order was getting off the ground, there was ridicule and questions about why the Church would need a new order of priests, Jordan explains.

“You would have thought, well, there’s not much likelihood that this group is going to really persevere or become a more established entity within the Church,” Jordan says. “We had a period of great vulnerability as a little missionary society struggling to get on its feet. Father has remained the mainstay.”

Brian Lewis is a journalist who lives in South Bend, Indiana. His work has appeared in such newspapers as The Washington Post, The Tennessean in Nashville and The Wichita Eagle.