The exuberant idealism of the Arthurian legends is hard to shake. It took hold in me when I saw Disney’s The Sword in the Stone as a child, which I reinforced with countless readings of the Golden Books version. The romance and adventure were in dramatic contrast to my suburban New Jersey upbringing, and I yearned for a quest the same as Arthur’s knights: a chance to do some good, to prove my mettle, to earn a coveted spot at the Round Table.

My daughter, Joan, caught the Arthur bug while growing up in South Bend, and it persists to this day. For her, the legends embody an eternal optimism — that “no ending is final,” as she says, and that “whatever is truly right can’t be conquered forever.” 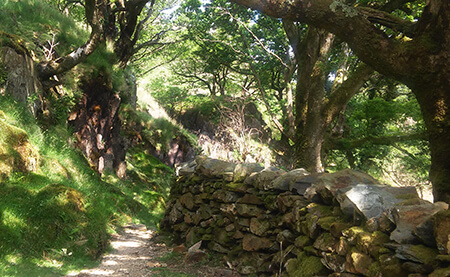 A sophomore in Notre Dame’s Program of Liberal Studies (PLS), Joan is passionate about literature, history and the arts, interests that took her this spring to northwest Wales where she spent two weeks exploring, sketching and mapping sites associated with the Arthur myth.

After she returned home and the jet lag subsided, we met at South Bend’s Fiddler’s Hearth for a Celtic lunch and some conversation. As we dug into the Welsh rarebit, Joan shared stories from her trip. She told about her long train ride from Manchester past Shrewsbury and down the beautiful coast to the village of Pwllheli; about her crash-course in the Welsh language at the Nant Gwrtheyrn Heritage Center and the curiosity she aroused when locals asked why she was there; about twisting her ankle atop Mount Snowdon and the British Army National Reserve officer who helped her back down to level ground (sans any Jane Austen-esque proposals of marriage, in case you were wondering).

Then she told a tale to strike fear in the heart of any dad:

One Sunday afternoon, she climbed to the top of Dinas Emrys, the hill where the wizard Merlin supposedly obtained his magical powers. It’s also where he confronted Britain’s Anglo-Saxon invaders with a visionary warning. The enchanter’s dream of a red dragon — prominently featured on Wales’ flag — overcoming a white dragon was a premonition that the native Britons would persevere and triumph over their Germanic conquerors in the end. 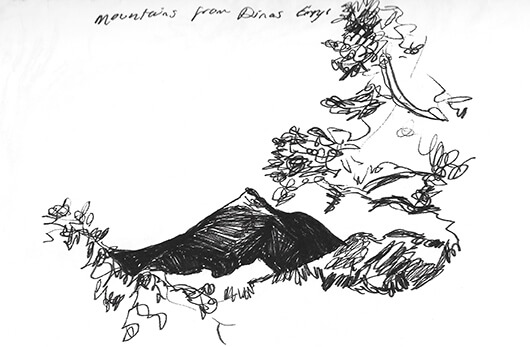 Joan got absorbed in the view from Dinas Emrys and in her sketchpad — in being there where the legendary events were supposed to have occurred. So absorbed, in fact, that she missed her bus back to the hostel, and there were no Sunday cabs. Her four-hour trek home took her along paths hard to discern in the twilight.

Fortunately, rural Wales is very safe, and the only wildlife Joan encountered were the omnipresent sheep and goats. Sure, her feet ached when she plopped into bed, but she’d stood on Dinas Emrys! Joan had seen with her own eyes what Merlin might’ve seen.

There was that exuberant idealism I remembered. I hated to interrupt, but I had to ask: Could she recall how she became so enamored of Arthurian lore?

Joan mentioned childhood fairy tales and stories, repeatedly watching Camelot with her mom, and maybe even Monty Python and the Holy Grail (a bit). Then there was T.H. White. “Reading The Once and Future King was different,” she said. “That’s when I formed an attachment.”

White’s Arthur resonates with Joan because he is flawed but nonetheless determined to fight on. “If the cause is just,” she told me, “then it will never die — like Arthur, sleeping, still out there, waiting to make things right.”

Joan’s idealism is a hopeful, Arthur-like worldview that has bloomed marvelously since she entered Notre Dame last fall — especially in PLS, and particularly in Professor Amy Mulligan’s Irish Literature and Culture survey. One of the themes of that class was the connection between physical place and legend, and Joan’s final project was an illustrated map based on a medieval Irish poem. The project gave her the idea that a similar map might shed light on the lesser-known Welsh origins of the Arthurian cycle.

Most of us know the melodramatic medieval French elaborations of the Arthur stories, the tales of Lancelot, Guinevere and the quest for the Grail — the lost chalice that Jesus used at the Last Supper. That tradition provided the source material for Sir Thomas Malory’s Le Morte d’Arthur. But Joan wants to go after the deepest Arthurian roots — the Welsh stories and chronicles containing the first references to a King Arthur. 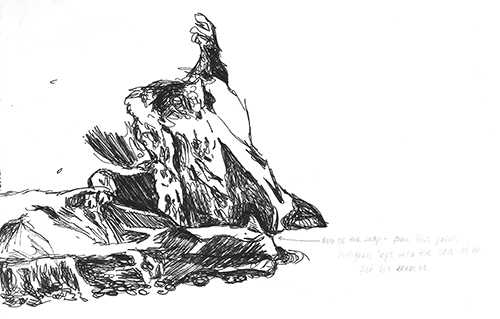 That meant joining a Middle Welsh reading group, taking a drawing class and getting ready to take the grant-writing plunge. “History, legends, and stories, as long as they persist in human memory, offer travelers a ‘phantom landscape’ to explore,” Joan wrote in her proposal to Notre Dame’s Institute for Scholarship in the Liberal Arts. “In this project, I aim to capture one of these phantom landscapes: the web of medieval legend associated with the Snowdonia region of Wales.” She found little available research on the geography of the oldest Arthur myths. Her hope was to visit those sites, capture them in sketches and photographs, and connect those images with text and contemporary maps to present a “cohesive, multi-dimensional encounter.”

Joan’s proposal was no flight of freshman fancy, for it outlined a four-year project involving overseas travel, language acquisition, text translation, photography and sketchwork, culminating in a publishable work of Arthurian immersion — and not just for scholars. As she indicated in her proposal, Joan intends eventually to retool her scholarship into a children’s book.

Joan grew up knowing a great deal about Notre Dame, but it was a dreamlike destination — a Camelot unto itself. It was a place we visited from time to time for Mass at the Basilica or walks on campus. Tours were a natural expectation for out-of-town guests.

Through Notre Dame’s Robinson Community Learning Center, Joan and her siblings drew a little closer, performing in ShakeScenes, a summer program that invites people of all ages and walks of life to perform scenes from the Bard’s plays before live audiences at Washington Hall.

Joan became a regular at Robinson, and eventually an AmeriCorps volunteer there, seeking to stir up similar passions for theater — and Shakespeare in particular — among children from the neighborhoods near campus.

Still, it never occurred to Joan until late in the college admissions process that Notre Dame might become her own academic home someday. She thought it made more sense to go elsewhere — on a quest, you might say.

Yet upon receiving her acceptance letter from Notre Dame, Joan began to feel the Domer draw. It just made sense: There was no better place to satisfy her particular academic appetites than Our Lady’s University. It just happened to be right up the street.

The irony is that now, thanks to Notre Dame, Joan’s adventures beyond South Bend have begun: A quest, in search of Arthur.