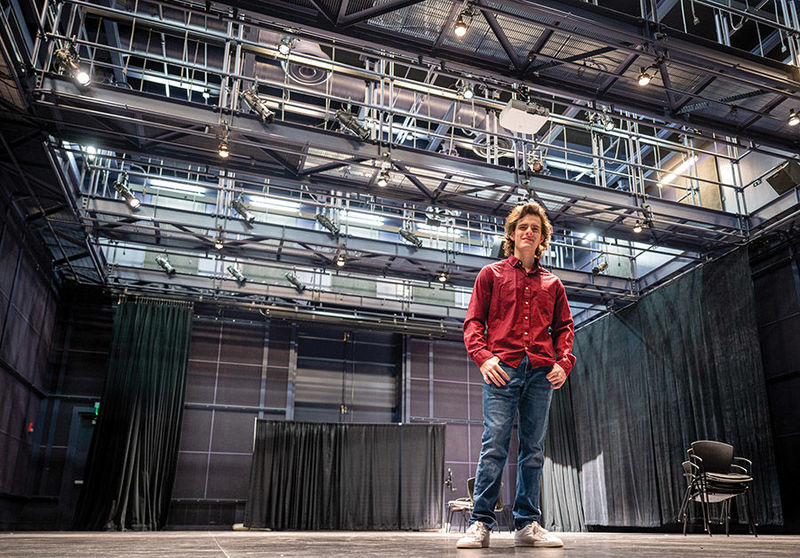 At the start of the 2018 season, the beginning of his junior year, Jorge Rivera-Herrans ’20 had never attended a Notre Dame football game. “While people were at the games, I was writing. I was always like, ‘Ah, the next one, I’ll go,’” says the premed-turned-musical theater student who had gotten attention around campus for his songwriting exploits. “I was just really inspired when I got there,” he adds. “It was so cool seeing all these people together and just celebrating the season, the victory. All these 80,000 people coming together — that was just inspiring to watch.”

A year later he was part of the gameday soundtrack. The Puerto Rico native, known to friends as Jay, wrote “The Fighting Irish (Of Notre Dame Y’all),” a hip-hop number that would become the first University-commissioned song for football since the power ballad-esque “Here Come the Irish,” released in 2003. The piece made its debut the evening before the September 14 New Mexico game, when Rivera-Herrans and fellow film, television, and theatre major Teagan Earley ’20 belted it out as part of the pregame festivities at the Eck Visitors Center. A one-minute clip could be heard on the stadium loudspeakers for the rest of the season.

It wasn’t the composer’s first time in the campus spotlight. Arguably his biggest moment came seven months before — with Stupid Humans. Staged in February and March 2019 at the DeBartolo Performing Arts Center’s Philbin Studio Theatre, Stupid Humans marked a University first: a student-composed musical production worthy of the FTT department’s performance schedule. The rap-inflected show hit the stage with a DJ booth in one corner, a talented group of students in the cast and the play’s author in its leading role, inspired by his own journey from would-be doctor to full-time creative.

All eight performances sold out, and before long, an impressive comparison was being drawn: the Puerto Rican kid writing and starring in his own hip-hop musical was Notre Dame’s own Lin-Manuel Miranda, the Hamilton creator whose family hails from the next town over from Rivera-Herrans’.

The connections didn’t stop there. In 2018, when Miranda set about staging a production of Hamilton in Puerto Rico and envisioned it raising funds for the island’s relief efforts after Hurricane Maria, Rivera-Herrans was one of 600 locals who stood in line to try out for a role. He would be one of 11 invited back — and then flown to New York City to audition for the role of John Laurens/Philip Hamilton. While he didn’t get a part, he was then invited to return to New York to watch rehearsals and meet the cast.

His academic introduction to theater came during Rivera-Herrans’ sophomore year in Performance Techniques, a class designed by Matt Hawkins, an assistant professor recruited to launch FTT’s musical theatre minor. “A lot of my training and experience is in new work,” says Hawkins. “And the only way to teach our students to be practicing artists is to do the thing.” Coming into Notre Dame, he hoped that “doing the thing” would eventually mean original musicals written by students.

That goal was met surprisingly fast. In one early assignment, Hawkins asked students to perform a song of their choice from a musical. Says Rivera-Herrans: “When he said that, I asked, ‘Any musical?’” Between classes and rehearsals for shows around South Bend, he had begun to write a show himself. A pivotal number felt nearly ready, so he performed it for his assignment. Hawkins sensed promising skill behind the song, and the professor and student embarked together on turning Rivera-Herrans’ idea into the full-fledged play that became the autobiographical Stupid Humans.

“As long as a student has some sort of raw talent, and they have work ethic and they’re disciplined about it, I can fill in all the other gaps,” Hawkins says. “I have learned from day one, if it’s their own work, they will be more invested.”

While the senior is flattered by the comparisons to Miranda, he doesn’t expect superstardom just yet. “I still have a lot to figure out,” he says. “I definitely want to keep learning, especially about music theory and different musicals in general. I’m not really sure what’s going to happen — and that’s part of the excitement of it.”

His immediate plans look bright. With assistance from Hawkins, an updated version of Stupid Humans — renamed My Heart Says Go — is in workshops this summer at Chicago’s Goodman Theatre. Now co-writers, the professor and student are open to pursuing further homes for the play, and, in the meantime, Rivera-Herrans is continuing to work on his senior project: an Odysseus-inspired musical called Epic.

The play, with a score that the composer describes as “tropical” in tone, loosely follows the plot of Homer’s Odyssey. Though it wasn’t completed in time to be performed at Notre Dame, the project did earn Rivera-Herrans a research grant to study the play’s setting in Greece, and it’s the latest in a growing body of work that has been a boon for the fledgling musical theatre minor.

“What’s exciting from a departmental standpoint is, it’s kind of the inaugural production of this new works ‘lab,’” Hawkins says of Stupid Humans. “We now have a lab theatre where we do new musicals, and the hope is to do one every other year. It can be student musicals, it can be faculty, it can be professional, but just creating new work — there’s a lot of excitement around that.”

Fostering an active scene for original productions taps right into the Notre Dame love of creating communities that can be a force for good — something Rivera-Herrans says was key in his decision to enroll here.

“The main reason I chose Notre Dame was the people and the community and the campus,” he says. He can’t say whether the University would have been on his radar if he’d planned to study theater instead of medicine, but “one thing’s for sure,” he says. “If I had been in musical theater my whole life, I never would have written Stupid Humans. So I am happy with the way things played out.”

Sarah Cahalan, a former associate editor of this magazine, is now pursuing a master’s degree at the Medill School of Journalism at Northwestern University.