The high-profile projects Stephen McFeely ’91 and his screenwriting partner Chris Markus have been taking on for the past decade are ripe for potential sermonizing. As the screenwriting team for this summer’s Captain America: The First Avenger and for The Chronicles of Narnia movies — The Lion the Witch and the Wardrobe, Prince Caspian and The Voyage of the Dawn Treader — McFeely and Markus have resisted many opportunities to swing for the allegorical fences.

“I read the stories when I was young,” says McFeely, “and so I went into this acutely aware of the iconic nature of C.S. Lewis’ stories.” The wrong team in charge of the film could have easily ruined it. Instead they were impressed with each director’s commitment to telling the story as honestly as he could. “We just put our heads down each day and wrote the best page 72 that we could write that day. We tried hard to make the characters as compelling as we could, be truthful to the story without cutting or highlighting ideas to fit a personal agenda.”

The integrity of that approach honored the original author and wowed audiences around the world, with the three Narnia movies taking in more than $1.5 billion in box office receipts.

The excitement of this high-profile success is a far cry from the modest start to McFeely’s engagement with professional writing.

While majoring in English at Notre Dame, McFeely recalls the ritual watching of Midnight Run or Monty Python and the Holy Grail with “the Flanner guys nearly every night.”

“I loved my experience at Notre Dame. But I started my writing career worried that the homogenous nature of ND would not allow for interesting stories.” McFeely does remember learning some good lessons about the craft of writing at Notre Dame. One “aha” moment was a simple one in which a teacher helped him realize that in a good story seemingly innocuous details are actually not random. “They are in fact conscious choices and part of the responsibility of a good writer.”

McFeely says he “did not write much except a couple of short stories” by graduation, after which he headed back home to the San Francisco Bay area and taught English at his former high school for two years. During this time he decided to follow his passion more directly and begin graduate school in creative writing at the University of California, Davis. Before this, however, he took a year off to volunteer as a tour guide at Carlsbad Caverns National Park and gain a different life experience.

McFeely met Markus at the UC Davis program. “We hit it off because we were the resident smart-ass guys out of the small cohort in the creative writing program.”

That attitude was fun for two years of grad school and for inspiring some creative thinking, but it didn’t pay the student loans — at least not then.

“I went home for break and was dutifully working on my novel to finish the creative writing program,” McFeely says. “I was a young man with limited life experience trying to describe my great-uncle, who was a Sicilian immigrant who had lived a lot. It didn’t work.”

Then came another simple yet profound realization: Someone gets paid for writing everything we see on television and in film. “As we sat one night making fun of everything on Baywatch, we also kept saying, rather incredulously, ‘Someone gets paid to make this?!’”

Facing the end of graduate school with student loans to be repaid, McFeely and Markus decided to move to Los Angeles, form a screenwriting team and dedicate at least four years to the long-shot attempt. “It was a risk, but we decided that we would give it an honest effort for a while. I hoped I would at least get in the game before I turned 30.”

By summer of 1996, the duo had day jobs in the industry, answering phones and getting coffee. Every free hour was dedicated to writing their own first original screenplay, You Kill Me. On their days off, they were at the keyboard at 6 a.m., continuing to polish their first piece.

The team approach has some benefits.

“We keep each other disciplined. It’s a lot easier not to stare at a blank page alone. Knowing you have someone else counting on you is like having a personal trainer at the gym — you are more likely to go.”

Along with their discipline, McFeely and Markus pride themselves on being good at rewriting. This frees them up “to push through the hardest part — completing the first draft” because they trust the rewriting process. “We know we’ll go back as many times if necessary until the story feels ready.” 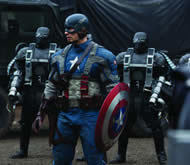 This commitment to the rewriting process was central to the team’s beginning in screenwriting and later helped push them through on projects like Captain America.

“Here at Marvel [Studios], we never stop kicking the tires on a script,” says Stephen Broussard, co-producer of Captain America. “We are always asking how we can improve concepts, scenes or ideas. And to their credit, Chris and Steve . . . took any idea we threw at them and made it even better.”

As they were finishing You Kill Me, McFeely was working for producer Mike Tollin. He told McFeely he would like to read the screenplay when completed, and if he liked it he would “send it around.” Tollin liked it, sent it around, and soon McFeely and Markus were in the game.

“We were on the ‘baby writer’ circuit. They send you to company X, you meet with some people and get parking validation but not much emotional validation.” This experience led to a critical breakthrough: They got their first agent. “Getting an agent is a big deal. And this happened somewhat quickly for us by the spring of 1998.”

The agent led to opportunities to pitch stories for some big names writing broad comedy movies. This led to their first official screenwriting contract on a movie that ended up never being produced.

“We signed. We were now officially in the Writers Guild. We both quit our jobs and writing was now our full-time job,” says McFeely. “I look back at it now and realize that you cannot pick your first job, but if you get started and start to get noticed, you can pick your career.”

After completing the comedy job, they started to get offers for similar work. This is when they decided they should try to control where they wanted their careers to go. The first step was switching to an agent who could connect them with projects more to their liking. For a short time, they wondered if there would be a next step, waiting a full year without work.

Luckily, the new agent got McFeely and Markus a chance to pitch for the HBO biopic The Life and Death of Peter Sellers. “Sellers really fit us, and we came up with a fun, quirky pitch that HBO loved. And so I was hired into a more promising career track on my 30th birthday.” The script was completed and turned in but sat for a while as studios worked through a backlog of movies prepared before the screenwriters strike.

By this point in 2002, the screenwriting story of McFeely had unfolded eerily close to the plot he had sketched out in 1996. It was an exciting period in which McFeely met his long-time girlfriend, Jennifer Cotteleer, an actress and successful entrepreneur who runs Bon Vivant Events, an event staffing service. McFeely was also able to get a couple of his one-act plays produced in L.A. and New York. Those plays, he says, “are very personal, exploring all of my own issues, problems with relationships and marriage, and thoughts about God.”

The screenwriters strike ended, the Sellers movie was made and had a good buzz. “We knew writing for HBO that they are a great outfit and often in contention for Emmy Awards.” In fact, Markus and McFeely were nominated for and then won Outstanding Writing for a Movie. The movie also took eight other Emmys, including outstanding lead actor for Geoffrey Rush.

McFeely recounts his first meeting with Rush in preparation for his role as Sellers. “We had a draft that included Peter Sellers . . . talking to the screenwriters, actually being the screenwriters for a few minutes as he thinks of how to recount his life and death.” The scene was edited out eventually, but for a day, Rush was sizing McFeely up in case Rush ended up portraying McFeely in the film.

The opportunities he has taken and excelled at have allowed McFeely to continue his career path in other fun ways too. Their first original screenplay, You Kill Me, was produced in 2007 and — much to McFeely’s and his Flanner friends’ delight — the cast included Dennis Farina of Midnight Run fame. In addition, the financial success of the movies has allowed the screenwriting experiment to become more permanent; McFeely is now a homeowner.

Captain America was released in July and did well at the box office and with reviewers in its first few weeks despite fierce competition from the final Harry Potter movie and other summer superhero films. A couple of early negative reviews on Wednesday night before the film’s weekend release made McFeely nervous, since he claims he reads the reviews and “gets a little obsessed” around the film’s release date.

But his initial worry proved groundless, as live audiences and a wide majority of reviewers enjoyed the film. McFeely says that it is turning out to be “close to our best reviewed movie ever. It’s nice that most people recognize the type of throwback movie it was meant to be and meet it right there.”

Producer Broussard believes the affection McFeely and Markus brought to the characters is a critical part of its success. “Steve and Chris came in with a ton of excitement about the project,” he says. “Making a big movie like this can be such a long and grueling experience. So you really want to surround yourself with people that have true passion for the project. You don’t want to find yourself needing to convince someone of why making a Captain America movie is cool.”

Writing about an iconic superhero from the war of “the greatest generation” for a society that is so removed and unengaged from the decade-long war on terrorism, says McFeely, required some serious planning.

“We thought for a long time over the question — was this a superhero movie that has a war in it, or was this a war movie that has a superhero?” McFeely discovered that the original creators of Captain America in 1941 were struggling in their era with a lack of national commitment to the war. Captain America was written partially because the writers wanted to move people to understand what was really happening to the Jews in Europe.

Near the end of the shooting of Captain America, McFeely was hustled over to the set by the director, Joe Johnston, to help rework a line. Standing there on the set with the director, lead actors and the entire crew waiting on him to come up with a line, McFeely says he had a powerful moment of loving being part of this game.

It appears that he and Markus will get to keep playing. “We have already hired them to write the next project for us,” says Broussard.

Sean Scanlon is senior director of philanthropy at the Cornell Lab of Ornithology.