He struggled to breathe, progressing from deep breaths with wet sounds reverberating in his lungs, to guppy breathing — opening the mouth like a fish, contorting the entire face. His heart rate slowly decreased, from 150 beats a minute — a pace attempting to keep up with the oxygen demands of the body — to 50 beats to 40 beats to that which is incompatible with life. The nurse pushed a tiny dose of morphine to ease the air hunger, the sensation we experience as the brain becomes deprived of oxygen. 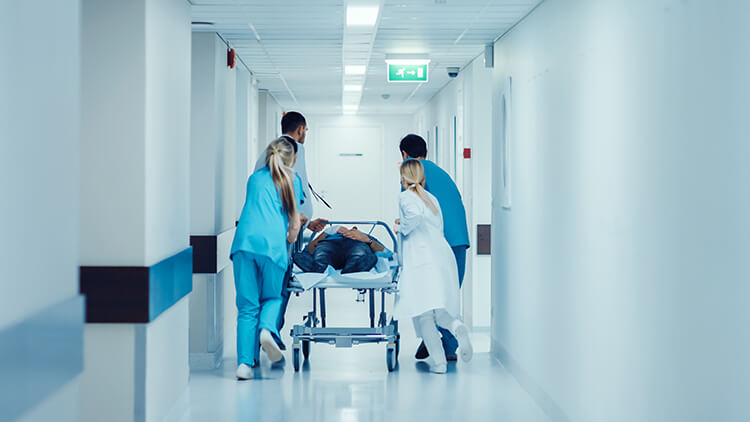 The old man, having lived for years through the slow decline of dementia, had wanted to die at home. Even with his brain clouded by the tangled proteins of Alzheimer’s, he understood and verbalized the opinion every time his wife or daughter asked him — even telling his family that he would never forgive them if they placed him in a nursing home. But Mr. Begay’s family was not present at his bedside when he came under our care that day. We called them as his condition declined, and they headed toward the hospital, a journey that would likely take an hour across the vast distances of Navajo Nation. We worked to stall the inevitable: giving every medicine we could; performing maneuvers to increase his oxygenation; everything, short of the “heroic measures” of life support that he and his family had sensibly declined.

Dementia patients do not pass from dementia in the end, but from malnutrition, dehydration or infection. These natural outcomes result from a brain that no longer feels hunger or thirst, does not recall how or when to swallow food. He may have choked on his dinner one night and had a traumatic death. If he had passed at home, the 12-year-old great-grandson who cared for him daily would have watched, however it unfolded.

Watching Mr. Begay struggle, I recalled my grandfather. When I was a junior in high school, I shared my bedroom with my grandfather as he slipped into dementia. I slept on the top bunk, listening as he had nightmares, sometimes pounding the walls with his fists. Eventually, his need for round-the-clock care escalated beyond what we could provide, and the family elected to place him in a nursing home. He retained the physical stature that had made him a terror on the football field — even punching a police officer who came to collect him when he escaped the nursing home — but failing teeth led him to be placed on a pureed diet. Somebody at the nursing home decided to feed him a pork chop, ending his life that night. An abrupt and undoubtedly merciful end to a several-year decline, but nobody in our family witnessed the event.

After watching hundreds or thousands of patients passing away, a numbness sets in. A sense of relief often accompanies the deaths of those who are elderly, frail, and demented, no longer living in mind and likely not in spirit. A similar release occurs with the deaths of those who’ve suffered long battles with cancer or lupus or even debilitating mental illness and drug addiction. The daily torture that was their lives has now passed, allowing them, and those who love them, to stop feeling constant anguish, however painful the immediate loss may be.

Certain hospital hallways are death’s waiting room, where patients with a list of medical problems the length of a Tolstoy novel dwell, passing back and forth between nursing homes and the hospital until one day the swell of problems finally breaks through the levee. But the small, community hospital where I work part time in the US — the hospital where Mr. Begay now lay dying — transfers out most of the sick patients to other places with more resources and specialists. Death is not a frequent companion here.

Mr. Begay reminded me of the first man I ever witnessed dying, before my career had even begun. In a small village in rural Eastern Nicaragua, the old man had labored breathing, the skin and muscles sucking between his ribs with each draw of air. Both men were small and frail, thin with white hair and an unkempt, short beard. Sharing Native ancestry, the men had similar bronze skin and prominent cheekbones. Both, ironically, lived most of their lives without electricity and indoor plumbing, although one resided in the richest country in the history of the world.

The room falls quiet for the last fifteen minutes as we all watch the vital signs trend in the wrong direction. A picture of Mr. Begay in his army uniform in Korea pops into my head, a crew cut of black hair and large ears jutting out from atop the collar of the khaki shirt. His chest stops rising to take labored breaths, the taut muscles in the neck no longer pull against the rib cage to suck air into the lungs. No heartbeat registers on the monitor. No heart sounds are audible through my stethoscope, no pulse palpable at the carotid artery.

The room feels warm, the air thick like jelly. The nurse’s cheeks flush as she stops administering the breathing treatment. The tech’s face falls. For the first time in a while, I actually experience the death. At the academic center in Florida, everyone had become calloused to the familiar friend of death. Here, in a small community, the staff knows the family, can empathize with their loss in a direct way that you don’t see in a large city hospital.

The family arrives four minutes later. None of them were present for his crossing over. The great-grandson wails and bangs on furniture with pubescent rage. The daughter hugs me, pressing her tear-filled face to my chest. I can’t remember the last time a patient in the US hugged me. The touch releases endorphins for both of us, a small burst of goodness amidst the sorrow. The experience of my colleagues, the complete conscious presence at the moment of death, allowed me to experience it again. I am so grateful to have been a part of the experience, to have offered what I can.

He was a man. He lived. He served. He was loved. He is no longer.