Some took a bus for six hours from the north of Haiti on Sunday. Others woke up early Monday morning to arrive in Port-au-Prince just in time for the training. We chartered a flight for the team of five coming from Jérémie — a journey that can last up to eight hours in a bus. In all, 20 doctors and 32 nurses, representing all 10 geographic departments of Haiti, attended the three-day training.

The first day began in a state of chaos, which was to be expected for such a massive undertaking, a training that has never before been done in Haiti. The doctors and nurses sat through most of the lectures on the first day together: the basic introduction to what cancer is, how we diagnose it and the modalities of treatment were applicable to everyone.

The second day released the nurses onto the cancer ward, and the real beauty of the training began. The five fully-qualified nurses from Miami and our current chemotherapy nurses served as the professors for the other 32 nurses from around Haiti. The massive chemotherapy infusion ward accommodated all of them at different stations. They learned how to calculate the body-surface area of patients for dosing purposes and then learned how to calculate doses based off of that. They didn’t learn on paper, though. They learned by studying the drugs of actual patients on the ward. Looking at the woman who is to receive the chemotherapy takes the exercise from theoretical to actual, and their nursing instincts kicked in. 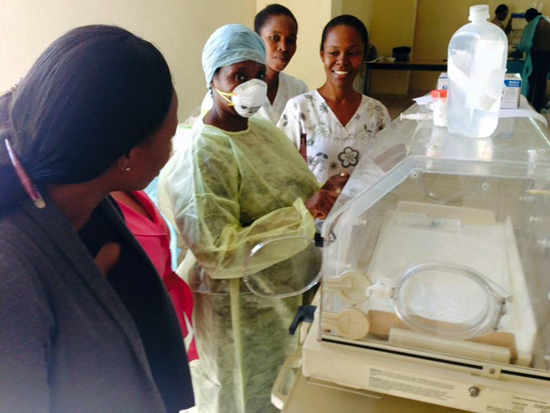 Each nurse had to practice donning the personal protective equipment — gown, mask, goggles, gloves, and hat. While in full protective gear, they learned to mix chemotherapy using saline or expired antibiotic powder instead of the actual chemotherapy. That way, they could make mistakes without putting themselves or others in danger from a spill. The nurses learned how to administer the chemotherapy on day three. While only four could actually give chemotherapy, all had to practice the manual manipulations required on intravenous lines while injecting saline into garbage bins instead of patients. Before the end of the third day, all 32 nurses performed each task at least once to satisfaction of their trainer.

For the doctors, they endured two full days of lectures on a range of topics. After learning the basics about cancer, they learned the specifics of how to diagnose the dozen most common types of cancer, which symptoms patients may present, what tests to order, and how to interpret the results. For most of the cancers, they understood that they would refer patients to specialists for further work-up and management. On the second day, we settled into the four priority cancers: breast, cervical, prostate, and Kaposi’s sarcoma (an HIV/AIDS-associated soft tissue cancer). The oncologists from the U.S. taught the specific treatment algorithms for cancer care, including the regimens and doses of each chemotherapy. On day three we reviewed patient paper cases for each of the four priority cancers, reviewing the treatment algorithms and the national protocols in the process.

How can a doctor learn to treat cancer in three days? The doctors only learned how to treat four cancers, two of which are primarily addressed through surgery, meaning that they would refer many of those cases to surgeons, but now they know how and when to refer. For breast cancer, the focus of the training, they learned how to give chemotherapy according to an algorithm. The algorithm is a series of “if… then…” statements that leave little room for interpretation. If a patient has this type of tumor at this stage, then treat with this drug regimen at these doses. Oncology in high-resource countries is complicated by numerous genetic tests and myriad of treatment options. In developing countries, only one treatment type is typically available for each type and stage of cancer, simplifying management. General doctors or even nurses, using treatment algorithms, treat HIV/AIDS in developing countries whereas this is largely the purview of infectious disease specialists in the U.S. Similarly, basic cancers can be treated by internal medicine doctors and surgeons in developing countries by using treatment algorithms. The main difference between HIV and cancer is that chemotherapy is toxic. The fear and respect of chemotherapy as a potentially lethal medication was rammed home repeatedly over the course of the training to both the doctors, who might harm patients, and nurses, who might harm themselves through too much casual contact with the noxious drugs.

Without disseminating treatment throughout the country, many more people will die unnecessarily of treatable cancers as they wait for spaces to open up in the few treatment programs that are available. Specialists in oncology require three additional years beyond their internal medicine training in the U.S. Where would countries like Haiti, who don’t have enough general doctors let alone specialists, find the doctors to train? With exactly zero fellowship-trained oncologists in Haiti, who would start the training program for them? How many people, and particularly women, would have to die while we debate this on a policy level? One U.S. cancer organization offered to train the doctors in palliative care, essentially saying that doctors in developing countries can be trained to help their patients die, but not to cure them of the disease that is killing them. Our training was a rejection of the view that cancer care is too complicated for developing countries. With over 8 million deaths a year from cancer globally, something has to be done. 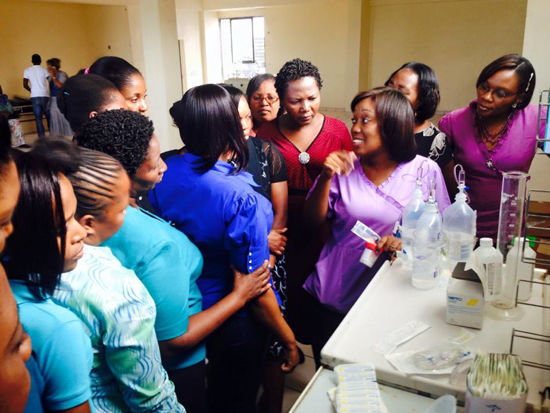 The final exam for the doctors didn’t involve any multiple choice test or essay — it was the real thing. We hired five brave women from our cancer program to serve as the professional patients. The test was based on the board exams in the U.S. where professional patients either pretend to have medical illnesses or actually have physical exam findings. The women represented three of the four stages of breast cancer — all but the earliest stage, which is unfortunately rarely seen in Haiti at this point in the epidemic. The doctors were asked to examine the patients and determine the stage of the cancer, the physical exam findings that led to that conclusion, and offer a treatment plan, complete with the specific drug regimen. All 20 doctors submitted their final plans on a sheet of paper and then we reconvened the class to review and discuss the answers. Not every doctor had every answer correct, but the thought processes were there and they understood the concepts.

For those doctors and nurses, the centralized training was merely the beginning, allowing for on-going education to account for the complexities of medicine. They’ll have access to the videos and slides online as well as in the thumb drives they were given with the final content. All the lectures from the training were filmed and put on YouTube. Since the training was given entirely in French, not Creole, healthcare personnel from any Francophone country in the world can view the individual lecture videos while following along with the slides that are posted online as well. The doctors in Haiti are in contact with expert oncologists from the University of Florida who will guide them through the treatment of their first dozen or so cases. For the nurses, they’ll learn how to mix chemotherapy at their own hospital in the presence of one of our trained nurses who will travel to the field simply to mix for one patient. Such is the effort required to launch a national cancer network and treatment program.

Let the cynics debate about the “appropriateness” of cancer care in poor countries, a pejorative argument heard every time medical advances from high-resource areas are attempted in poor countries. Haiti now has doctors and nurses, geographically-distributed around the country who can give chemotherapy for breast cancer. Ask the poor woman from the distant countryside what she thinks of her doctor’s new knowledge in treating her breast cancer. Better yet, ask her children what they think of having their mother around.