A few weeks ago, a predictable cycle unfolded on the streets of Port-au-Prince and the TV screens and front pages of the West. The international community imposes its will on Haiti. Haitians fight back. The occasional chaos of the Haitians’ natural response is used to label Haiti a problem country, a failed state. The international community shakes its head, imposes more sanctions and brings in more guns, and wonders why the cycle of violence and poverty continues. Why is Haiti a “shithole country”? This cycle of failed foreign policy could have something to do with it. 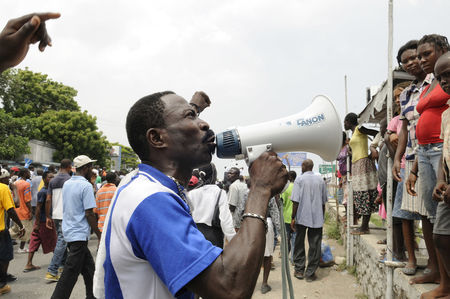 Images of anger and violence in the international media perpetuated stereotypes during recent protests in Haiti. Photo via Shutterstock

Per an International Monetary Fund order to remove subsidies on energy, the Haitian government announced on July 6 that, effective that evening, energy costs would be rising sharply. Gas prices rose 38%, diesel by 47% and kerosene, used as lamp oil for those without electricity, by 51%. A gallon of gas went from $3.07 to 4.80 overnight. For the drivers of tap taps, a form of privately owned public transportation, these hikes would cause profits to go up in smoke — meaning new tap tap prices were announced in short order as well, rolling the pain downhill to the working poor who can pay as much as 30% of their daily wages on transportation to and from work. The change was well-intended: following IMF rules allowed Haiti to remain eligible for nearly $100 million in financial support from the Fund’s member nations, which, in a country with double-digit inflation and a $150 million budget deficit, could be a crucial respite. The implementation of the changes, however, wasn’t so positive.

How would you react if gas prices rose by 40% tomorrow? You may have to cut back on $6 lattes or shrink your mobile data plan, but, for most Notre Dame readers, that’s probably it. For those living on the knife edge of poverty, though, drastic changes can be devastating. Farmers can’t travel as far or as often to market to sell their produce. Those who commute from the outskirts of the city where they can afford housing might see the cost of their long commute double.

In the wake of protests over the price hikes, the pictures across the media showed burning tires, black men with their faces covered, standing in the foreground or shouting with a raised fist. That image almost perfectly encapsulates what most Americans think of Haiti — poor, violent, angry — all steeped in three centuries of institutional racism.

Undoubtedly, structural racism plays a role in the way the U.S. government (no matter the ruling party) relates to Haiti. But it impacts international media coverage as well. A protest that draws 5,000 people in a city of three million would be small news in the U.S., but it’s a huge story when it happens in Port-au-Prince. Tires burn on just a handful of streets and the media obliges with photos of the flames. Of course, those planning the protests understand these optics, and they use them to sow doubt in the government among international donors and the upper class. The violence against public property is a negotiating tactic, a language of power spoken in the streets as a response — no different from the dozens of massive public protests in the U.S. in recent years — to a government that listens to special interests over those of the citizens. The language of protest is the language of the oppressed, sometimes using physical violence to counter structural violence. Economic violence at the hands of the state is called just, but, when starving people throw rocks through windows, it is deemed a riot.

The overreaction that such “riots” incur has real impact. Businesses withdraw and choose not to invest. Researchers shy away from on-the-ground investigations. Volunteers pull out of planned trips or pack their bags to go home. At my organization, two medical students passionate about global health decided to leave the island. Who could blame them? They see fires and are sheltered in place, and so they turn to the international media to learn more about what is going on just outside the door. Surgical teams at other organizations cancelled entire trips, leaving patients hanging in the balance. Family members of mine were more worried than they had been since the hurricane in 2016.

In my last column, I told of my team’s recent evacuation of a sick American patient from a cruise ship. This evacuation came 10 days after the protests had come definitively to a stop. But the ship’s lieutenant still claimed that “Haiti could pop off in violence any minute,” offering the assessment as justification for keeping a gravely ill man from medical care on the island. Such bias isn’t without precedent: For years, the cruise company didn’t tell passengers that they were in Haiti at all, referring to their port of call as simply the “private island” of Labadee. (Given that the actual port community of Labadee isn’t an island, that makes two lies in one.) In their minds, Haiti’s potential paroxysms of violence were as likely to claim their passenger’s life as his heart stopping again. Both had happened in the recent past, the reasoning must have gone, and therefore could happen again. Never mind that one had afflicted this man just hours prior without warning or explanation while the other had been dormant for ten days and, even at its height, left 99 percent of Port-au-Prince untouched and claimed lives only when police opened fire. Unlike the protests, Mario’s heart issues did recur — fortunately, by the time they did, he was in our care.

While the media showed one image of the protests raging around the capital, pictures and videos circulating on WhatsApp offered a different picture of the mean streets. Most showed a handful of young men systematically placing tires across the road and lighting them on fire. No guns, bombs, or attacks on people. Even as they torched the parking lot of hotels popular with foreigners, the hotels themselves remained largely untouched. Rocks were thrown through windows occasionally, but the goal was spectacle, not injury or harm. Several businesses were destroyed and set ablaze, but they all belonged to a handful of prominent families — making their torching, in protesters’ eyes, a finger in the eye of the rich, an opportunity to practice class warfare that they are politically unable to accomplish in daily life. Corrupt and inept governance had kept the police unpaid for the prior two months, so officers largely sat out the protests. Emboldened by their absence, some people — struggling poor and opportunistic thieves alike — decided to earn a buck through looting.

The protests were over within 36 hours of their start. The gas prices were lowered by Saturday night and calm was generally restored by Sunday morning. The Prime Minister, the technical head of government but in reality more of a figurehead like the U.S. Vice President, resigned, quelling the political pressure for now.

That weekend of protests was undoubtedly Haiti’s worst in my six years in the country. But an average weekend in Los Angeles of Miami has far more violent deaths, and the protests in Ferguson and Baltimore attracted far more people and damaged more property. If you look beyond sensational news stories to the real statistics, Port-au-Prince has a lower murder rate than any major city in the U.S. Perhaps, then, if you are frightened of going out in downtown Chicago, you can come to Port-au-Prince for a night of French food, jazz music and compas dancing.