We opened the doors, and the patients started streaming in. Not just a trickle, more like drinking from a fire hose. Without any advertisement or even letting partners know that we had started, patients showed up, some of them very sick. We saw nine patients with breast tumors on the first day and performed biopsies on two of them, all with a staff that had no prior oncology experience. In the first week of operations, we infused chemotherapy in eight patients and started another three on outpatient hormone treatments.

How did we get here, to the edge of a functional program, still teetering between success and failure?

I helped build the national oncology program in Rwanda last year, and the grand opening of the cancer center was attended by former president Clinton, actors and dignitaries. Now in Port-au-Prince, we’re building a small scale version of the national program. Without the resources and clout of Partners in Health or a national government, however, the task looms larger. This time, there is no team of oncology experts at Harvard to design the protocol, and nobody on the team in Haiti possesses experience in oncology or even general program implementation. We’re starting from scratch, and it feels right, exciting but frightening.

I’d spent nearly a year designing a fellowship training in global health for internal medicine doctors. The goal was to have the fellows start in Haiti at the same time as the breast cancer program, providing the program with a doctor trained in internal medicine year round. When it fell apart in a disappointing collapse under the combined weight of academic bureaucracy and myopia, I was left alone to build the oncology program. Not surprisingly, I was unable to accomplish much on my own.

Then a medical school professor referred me to a breast cancer specialist in Miami who had spent most of her career working in the Caribbean, but never had traction in engaging colleagues in Haiti. I was able to be her link on the ground in country, and she has helped introduce me to other experts, taught me to write grants and design proper research projects.

Now I had an oncologist to advise the program, a hospital to house us, a pharmaceutical company to buy cheap but effective chemotherapy from, and a long line of women in desperate need of care. I’d been referring women to other locations in the hope that they might find treatment, and it looked as if that would have to continue despite the progress we had made. We had no funding. Nothing. Not a single dollar. Donors don’t want to hear that they’re the first ones giving money, that you have no idea where the second dollar will come from, even if you have a picture of yourself dressed as a doctor and conversing with President Clinton. 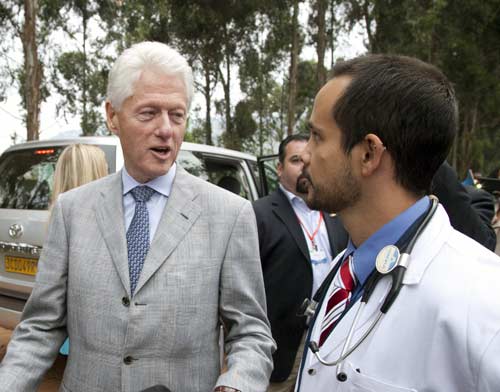 “We’re going to start a breast cancer treatment program. Can you donate?” I asked anyone and everyone, shouting into the wind.

“Do you have a program going? Where will my money go?” asked the potential donors.

“Well, we’re going to have a program. Soon. Right now it’s more of a concept for a program.” I shifted uncomfortably. “Look at this picture of me with President Clinton. Don’t I look like professional and trustworthy?” I let the thought linger, allowing them to contemplate if Clinton and I are actually friends and that maybe he has me on speed dial and I call him Bill. “Wanna donate?” We were dead in the water, a failure to launch, just a useless swirl of good intentions without funding.

Slowly, like a steam-engine train chugging to life, the wheels grinded against rusted iron tracks. The Haitian Support Group Against Cancer, a group of concerned Haitians with means, decided to partner with us and agreed to buy a portion of the first round of chemotherapy. Two friends pledged the funding to do the same. We were moving, but not ready to start yet. Finally, one generous donor shifted his money from one area of care in Haiti to our program (the other program still has full funding), and we were off.

My new boss at the University of Florida has been exceedingly supportive of our efforts in Haiti from the minute I met him and is now supplying personnel to help guide a young, inexperienced researcher. Perhaps most importantly, he believes in what we’re trying to achieve and has offered a large grant to conduct research on breast cancer in Haiti, money that will largely fund the treatment of poor women with cancer. The seed funding is one of the reasons we were able to launch the program at all. Even though we had no oncology team or equipment to outfit the oncology ward, I placed the order for the chemotherapy and hoped that the rest would fall into place by the time it arrived from India.

Over the next month, the staff at the hospital stepped up to locate a team capable of operating the oncology program. By the time we opened, the team consisted of two OB/GYNs, two nurses, a first-year medical student from Miami, and me. We have the support of two general surgeons, my bosses in Haiti, and the breast cancer specialist in Miami who is advising the project. Logistically, a team in the Project Medishare office in Miami supports us with procurement, financing and organizational issues.

The nurses previously had had no training in oncology. They’d both worked mostly with children before, but they came highly recommended and were enthusiastic about being part of something new. As women, they understood the impact that the program could have on their mothers and sisters, grandmothers or daughters. After much begging and pleading with a dozen Haitian nurses who work in the U.S., one woman agreed to come down to Haiti for three days to train the nurses in the infusion of chemotherapy. She was splendid, flexible and forgiving of the shortcomings of our nascent program, and her efforts put us on the right track. She helped us ensure standards of safety for the nurses that offer them full protection but in a fashion that is appropriate for a low-resource setting.

The doctors are OB/GYNs by training, young and new to the hospital. While already skilled at caring for women, they’re both excited to develop new abilities to help with diagnosing and treating breast cancer. They ask probing questions which force me to explain clinical decisions completely, and don’t allow me to gloss over tiny details that I would have thought they wouldn’t need to know. In exchange for the training in oncology, they’re transforming me into a better doctor and teacher.

The medical student ran in every direction, mopping the floor, moving furniture and, after she’d seen a few done, performing biopsies under my guidance. She’s written protocols for mixing chemotherapy and taught the nurses how to organize the electronic inventories to ensure that we don’t run out of medications and supplies. The program is a month ahead of the schedule for maturation that I had dreamt because of her involvement. She has filled the hole that was left by the failure of the global health fellowship.

The patients continue to stream into the program, referred from our wound care clinic, from the public hospital, the Support Group Against Cancer, and from our friends at Partners in Health. We’re designing methods for patient flow and referrals on the fly, usually after becoming frustrated that the lack of a system wasn’t working out. Bill still hasn’t shown up for a photo op.

The OB/GYNs were unsatisfied with only a breast cancer program and, nearly every day for the first week, they asked me when the cervical cancer program was going to start. Cervical cancer is the leading cause of cancer deaths in women in Haiti, a marker of the absence of screening services like Pap smears which, along with the vaccine, have made cervical cancer an afterthought in the U.S. But the equipment to launch the program is expensive, around $10,000, and we’re not there yet. Soon, I tell them. Right now it’s just a concept for a program.