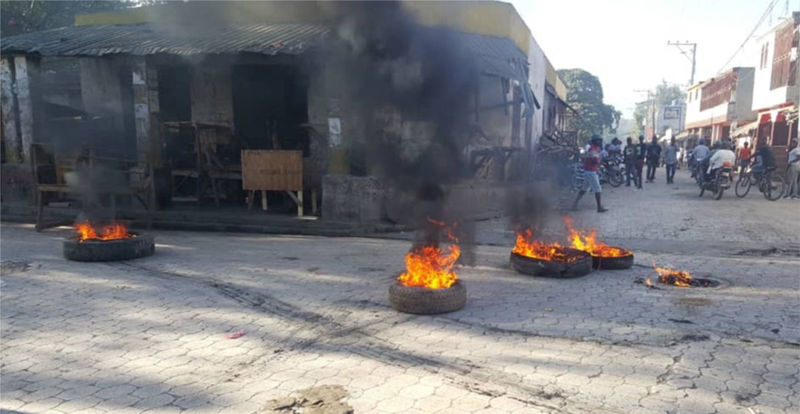 Flaming tires barricade a street in the Haitian town of Hinche. Voice of America

The flames are so thick as we approach the barricade on a motorcycle that we can’t see 10 feet in front of us. I hold my breath and squint my eyes to protect from the billowing smoke, but we ultimately find this barricade impassible. The previous two had small defects where a motorcycle could squeeze through, but the fire on this one is so recent that we have to dismount and walk over a foot-wide pathway at the far end. A grocery bag with Diet Coke and yogurt dangles in my hand as I make my way up and down the earthen barrier. The rest of the groceries and the cash I had come to Haiti with are on my desk at the office, where it will remain for days until I can finally take my car home when the barricades temporarily relent.

They call it “peyi loc,” or “locked country.” The political opposition’s strategy in Haiti is to strangle the country until the president, Jovenel Moïse, steps down. I have no real opinion on the politics of the moment. The previous regime may have stolen as much as hundreds of millions of dollars. The current regime has been branded as just as bad, although that would be nearly impossible given the lack of cash to steal or construction projects to skim from.

A few thousand young men, many paid for their efforts, erect makeshift roadblocks all over the city and throw rocks at cars that attempt to traverse them. Only through this kind of violence by a few against the many is the protest maintained. I have participated in many political actions, from knocking on doors to handing out leaflets to marching in protests. Unfortunately, the current situation reeks of a city of 3 million people held hostage by a few young men, financed by a few old, rich men.

The gripes of the opposition are certainly legitimate, including massive inflation, rising gas prices and constant corruption. But the government has barely functioned for over a decade, with all parties and individuals using the people’s taxes as their own personal piggy bank. Call me cynical, but I very much expect the next administration — whoever and whenever that is — to do the same thing.

What, then, is the point of peyi loc? The wealthy, the politicians and the street gangs profit significantly when in power and somewhat less when out of power. The opposition, which consists of about five major parties, want Moïse out at least two years prior to the end of his term. While he has been credibly accused of significant graft before coming to office, no formal proceedings have occurred. If he were to step down, there may be a provisional government for three years, as the constitution doesn’t provide for early elections in this kind of situation.

Six weeks of barricades and clogged streets have had huge repercussions on the masses that all sides of the political morass purport to represent. School, currently postponed until January, has not opened at all this year. When millions of schoolchildren sit at home instead of learning, everyone loses, including the future of Haiti. Doctors and nurses cannot get to work, pharmacies are shuttered, leaving millions without any access to health care. The majority, who live on less than $2 a day, can’t go to work or sell their goods.

Since less than a half dozen roads offer access to the main cities outside of Port-au-Prince, a few dozen well-placed roadblocks prevent gas, food and other staples from getting to those places at all. In addition, thieves take advantage of the chaos. Gangs have taken their cue to start small-scale wars, leaving the bodies of young men, bloodied and burned, on the streets for hours, even days. Foreign embassies are closed, so obtaining a visa to escape the chaos is impossible.

Fortunately, the Trump administration decided to extend the temporary protected status (TPS) for 60,000 Haitians who left post-earthquake in 2010 and are still living in the U.S. in immigration limbo. Immigration to the Bahamas is blocked by the destruction left by Hurricane Dorian.

In early October, the flaming street barricades were so bad that I couldn’t get my luggage to my apartment for three days after landing, having to ride on a motorcycle instead of driving my car. Each time we approached a manned barricade, we would negotiate passage using a variety of tools. Sometimes the moto driver knew them personally, sometimes we used my claim as a doctor going to the hospital and sometimes good old-fashioned cash. One wiry young man threatened me with a rock, cocking it back like a baseball pitcher, as if he meant to smash it in my face.

Having cared for hundreds of violent men and prisoners over the years, I could tell that he was not one of them, but a misguided, unemployed youth pressed into service for $5 a day. He glanced at the plastic bag of groceries at my side and demanded I give him one of my Diet Cokes, a fee I was happy to oblige, allowing him to save face and not have to break my face.

In a country where the top one percent owns 90 percent of the wealth, social strife is inevitable. Add to that a corrupt government, from the bottom to the top. To obtain a passport in a timely fashion, many people have to pay the civil servant a bribe, in addition to the official fees. Police stop me on the street at least once a month and strongly suggest that we’d both be better off if they had some additional pocket money.

I rarely mention these problems in print, afraid to reinforce negative stereotypes and to contribute to a general sense that Haiti is unsafe. Port-au-Prince has a lower murder rate than Miami. At present, Haiti is not unsafe. You just can’t go anywhere due to the barricades. Most people stay home, meaning that they can’t earn money and they are now starting to starve. Man-made privations are devastating a country that always lives on the knife edge of survival.

The Moïse administration either doesn’t have the political power or will to stop the madness. Every now and again, the police clear barricades and protect wealthy neighborhoods, but there appears to be no systematic effort to restore order. Entire neighborhoods have been barricaded with large pieces of corrugated tin metal sheets, downed billboards and hulks of burned vehicles. Since the protests are carried out by small, isolated groups of young men, it wouldn’t take much for the police to dismantle the barricades and jail the agents of chaos, even if for a few weeks. The police hadn’t been paid in over a year and have recently been given five months of salary. They’re no dummies, so they just launched a new demand for a raise. The absence of the police on the streets is obvious.

The cancer program at Innovating Health International has stayed open for all but three days of the last few weeks. We’ve opened on Saturdays and holidays to try to accommodate as many patients as possible. But at least 30 patients a week are missing their chemotherapy and we only held one event related to October’s Breast Cancer Awareness Month. This week, I was the only doctor who could make it into the center, seeing any and all patients who showed up. We had to furlough nearly 20 percent of our workforce because we can’t afford to pay staff without bringing in more money from patient services.

While the worst constitutional crisis of the last 40 years unfolds every day in the U.S., my adopted home burns. The Trump administration still backs the Moïse administration, mostly out of inertia and a lack of good replacement options. As long as the U.S. backs the administration, it’s hard to imagine Moïse resigning. While the rich and powerful fight over the right to steal and continue their monopolies, the poor suffer, stuck in their hovels, unable to go to school or work or the hospital. We seem to have reached an uneasy equilibrium where the violence is minimal, but so is the actual work and travel that can occur.

And there is no end in sight.

Vincent DeGennaro is an internal medicine doctor and global public health specialist in the Florida International University College of Medicine. He works mostly in Haiti with the nonprofit Innovating Health International. See his An American Doctor in Haiti blog.