I showed up at the helicopter base and greeted the regular staff: a paramedic, a flight nurse and a crew-cut pilot. The helicopter is an air ambulance used to transport the sickest patients to the hospital that offers the most-needed services in the least possible time.

The pilot, a Gulf War veteran with a salt-and-pepper flat top, sported a navy blue jump suit and a pair of wings on his chest. He offered the morning safety briefing, reminding everyone to stay mindful of their surroundings, call out threats and be specific about the oncoming obstacles. “As per FAA standards, no cell phones during the flight, and cut off the chatter upon landing, only utilize the radio for emergent conversations since I may need to communicate with the tower.” He flipped the briefing card over in his hand, giving it two full rotations before determining that he had covered all the necessary information. 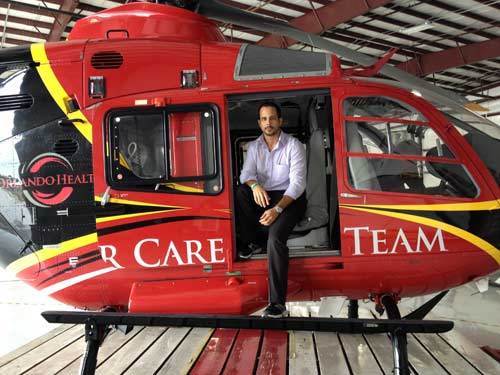 Then came the waiting. Three helicopters are staged at different landing sites across a broad swath of central Florida and the areas surrounding Orlando, but they average a little over one call a day per helicopter, leaving 21 hours a day to fill. During medical school, I rode along with firemen and paramedics, spending most of the day sitting at the firehouse eating or playing cards, waiting for the call that would shoot you full of adrenalin as you rushed to the car. Invariably, the call amounted to a non-emergency: the old man with the twisted ankle or the 30-year-old woman suffering from heart burn and a panic attack. And then back to waiting.

At the helicopter base, black leather recliners ringed a 65-inch flat-screen television in a comfortable living room where an episode of “Pawn Stars” played in the background. After two episodes, the flight nurse asked if I wanted to review the contents of the medical helicopter. We walked out onto the tarmac and popped open the rear door which allows the crew to slide the patient into the helicopter. Since space is at a premium, the equipment and consumables were neatly tucked in drawers and buttoned in pouches hung from the walls and ceiling. She slid open the side door and opened the drawer where the IV fluids were stored and pointed out the oxygen tanks fastened to the wall. The helicopter had some of the most modern tools available to the medical community, including fiber optic cameras and pocket-sized EKG machines and patient monitors.

Then I tried on a pair of $15,000 night vision goggles. Night vision goggles enable the crew to fly at night and since they provide an advantage to our military, they are a guarded state secret, their purchase tightly regulated by the federal government. We went into a dark room with no windows and I flicked them on. The world appeared green, like the inside of the Matrix, but I could see in complete darkness. I adjusted the focus until I could have spotted Osama bin Laden, but only had the toilet and shower to investigate.

Finally, just as we sat down to lunch, the call came in — seven minutes to get in the air. I took one bite of my sandwich and rushed to grab my helmet from the table. I made sure that the chin strap fit snugly, likely completely useless in the event of a real crash. After a brief pre-flight checklist, we were airborne, the hulking machine lifting easily, as though weightless, and the ground slowly drifted away in one smooth motion, reaching altitude in a straight line before changing directions and lurching forward towards a hospital across town.

The earth lay 1,000 feet below us, not far enough away to miniaturize life like on an airplane, but just enough to give a wide-lens view of the entire city. At first, we soared over the rural section of Orlando’s outskirts, where ribbons of highways cut through and around lakes, golf courses and undeveloped land. Then we reached the baseball fields and high school and finally the businesses, warehouses and mechanic shops of Orlando proper.

The pilot and the crew discussed the logistics of the call, an older gentleman with signs of a stroke. The nearest stroke center of excellence was located on the north side of town, opposite of the patient was located. The paramedics in the ground ambulance had requested the helicopter for precisely that reason, but a storm front was rolling in with the potential to block our path. The helicopter raced to beat the clock.

We landed at the helipad of the hospital where the patient had been taken, the metal rungs gently touching the concrete with barely a sound. We rushed to the ground ambulance and spoke with the paramedics while examining the patient, who was unfortunately not in a position to contribute to the discussion. As we transferred the patient to the helicopter stretcher, the debate continued as to where to bring him, our options dwindling with the approaching rain. Within five minutes of landing, the helicopter was taking off again.

A wall of rain was visible from our perch 1,000 feet in the air. The gray barrier divided us from the stroke hospital in the north. The pilot checked the reported wind speed of the storm to determine if we could traverse the storm safely in the helicopter, and a few tense moments passed as the patient moaned in the stretcher. The pilot couldn’t verify the real time wind speed of the storm, so we sped parallel to the wall of rain towards the nearest hospital. My first helicopter ride might have been my last if the storm was any rougher than anticipated.

The storm crept towards the helicopter and the rain lashed the windshield as the hospital came into sight. A buzzing alarm inside the cockpit alerted me that something was wrong, but right after a quick updraft of wind tried to lift the helicopter up again, we settled down on the ground-level helipad. We ran out into the pouring rain to unlatch the back door and slid out the patient. The warm Florida rain pelted him on his exposed arms and face, the rest of him covered by sheets and straps.

“I’m cold! I’m cold! I’m cold!” shouted the elderly gentleman. The man who hadn’t spoken a coherent word since his family had found him on the bathroom floor was suddenly awake, seemingly cured from the stroke by the slanting rain. We finished the mad dash into the emergency room where we handed the patient over to the hospital staff, and the energy that had sustained the flight amid the coming rain drained out of the situation.

The deluge prevented us from taking off again so it was back to waiting, this time in the emergency room lounge. After nearly an hour of downpour, we lifted off to head back to base. When a buzzing alarm rang again as we neared the ground, I prepped for another catastrophe but was assured it was merely an altitude alert for the pilot. As I drove to the Orlando airport to catch an airplane, I was excited to ride in a medical helicopter again, perhaps next time in a less developed place, maybe in Haiti.