It seems everyone has their own lists of where to eat, drink, and partake of the local scene in the world’s leading cities. As a physician and humanitarian, I’ve been blessed to travel for work and play, living in East Africa and the Caribbean, and having family in London and the South Pacific.

In these confusing times, we can shut down and isolate ourselves, or we can explore and connect with the rest of humanity. I choose the latter. Here’s where to find the hidden gems in nine of my favorite cities when you’re tired of the beaten track.

Eats: Ethiopian Village, the site of a terrorist bombing during the 2010 World Cup, is still open for business and better than ever. The authentic food served up by the Ethiopian staff has kept locals and foreigners coming back — despite the tragic episode.

Drinks: Iguana is the dive bar where local hipsters, students and political advocates rub elbows with foreign do-gooders and businessmen. The music ranges from reggae to jazz to electronica.

Activity: Participate in the dance and the open-stage jam session at the National Theatre. It begins as a variety show and quickly devolves into a dance party when spectators get involved in the traditional dance circles.

Eats: Indian Veg in the Angel section of London has delicious, all-you-can-eat, buffet-style vegetarian Indian food for only five pounds, and the pro-vegan propaganda plastered on the walls is an added kick. On Sundays, the Brick Lane Food Hall in East London offers cuisine from a dozen different countries cooked fresh at tiny stands situated in one massive warehouse.

Drinks: NOLA, an homage to New Orleans in the middle of Shoreditch, offers authentic Southern cocktails and a party atmosphere set in classic, tasteful theme decor.

Activity: Cruise the Thames on the Tate Boat, which connects the Tate Modern and the Tate Britain, then take in the museums on either side of the ride. At night, trawl London’s electronic music scene, which gave birth to many forms of techno, house, trance and dub step. You can find it all on Kingsland Road in Dalston.

Eats: Everyone has a favorite pizza joint in NYC, but Di Fara Pizza in Brooklyn offers a true old-world experience. The chef, an Italian gentleman in his 80s, still cuts the fresh basil with cooking shears and adds a daub of olive oil to every pie as it emerges from the oven.

Drinks: Molly’s Shebeen is an authentic Irish pub on Third Avenue in Manhattan, complete with sawdust on the floor and a wood-burning fireplace. Order a pint of Irish Red and the shepherd’s pie for the full experience.

Activity: Stroll through The Frick Collection. Housed in a classic mansion on the Upper East Side, the museum features El Greco, Titian and Manet in an intimate setting — more home than museum.

Eats: Sip a vodka martini while sampling an array of oysters on the half-shell at Le Mary Celeste in the 3rd Arrondissement. The stone interior design says simple, but the French-inspired tapas are delightfully complex.

Drinks: Nothing beats the speakeasy atmosphere and killer cocktails of Candelaria. Rated among the top cocktail bars worldwide every year by those in the know, they manage to provide quality without pretense.

Activity: Of course the museums offer world-class art surrounded by buildings with gorgeous architecture. Venture out into the bouliers (ethnic ghettos) to learn more about Paris’ diversity, hidden from view at the classic tourist locales.

Drinks: The new rooftop bar at the Karibe Hotel, called Asu, has a view to die for. The fruity martinis complete the tropical vibe.

Activity: Rent an all-terrain vehicle and ride up into the mountains of Kenscoff and Furcy, better on a Sunday afternoon when the usually-clogged roads are clear of traffic.

Eats: So it’s not exactly hidden, but the all-you-can-eat churrascaria Porcão offers so many different types of grilled, skewered meat, you’re missing out if you don’t go all in.

Drinks: If you tire of the caipirinha, Brazil’s cocktail, switch to a chop, a small glass of beer that allows you to titrate your buzz with scientific precision while still being gregarious — a must for the late nights of Rio.

Activity: Hang-glide off the top of Sugar Loaf Mountain on the southern side of the city. Gorgeous views of the beach, mountains and favelas. 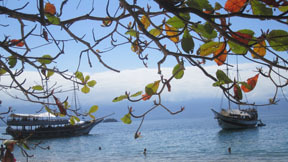 Eats: Down on the Embarcadero, not quite a hidden spot, lies the Hog Island Oyster Co., where you’ll gorge on the most delectable oysters from the Pacific Northwest.

Eats: Chinatown in Yokohama. Technically, Yokohama isn’t in Tokyo, but the twin city is so close that the two melt together. Half a million Chinese immigrants live in Tokyo and Yokohama, making the food at any Chinatown restaurant a must-have. For a special treat, try the pidan — eggs cured in ash and lime for two months prior to consumption.

Drinks: The Shinjuku district boasts all the nightlife of Tokyo, but the best cocktails in town are found in the 52nd floor bar of the Park Hyatt Hotel of Lost in Translation fame. While pricey, the view and swanky ambience simply cannot be matched.

Activity: Spend a leisurely day at the natural hot springs, the onsen, soaking in magma-warmed water piped up from two kilometers underground.

Eats: On a weekday, head to Mangialardo & Sons on Pennsylvania Avenue SE for a G-Man, a heaping Italian sub named for its popularity with FBI agents in the 1970s. The family-owned deli has been in the same spot since 1953. If it’s the weekend, get brunch in the cozy garden dining room at the Tabard Inn near Dupont Circle.

Drinks: Bar Pilar on 14th Street NW has maintained a relaxed and friendly atmosphere despite the increasing frenzy of the surrounding neighborhood. The upstairs area is great for drinks on a dreary afternoon. For a true neighborhood dive bar, head to Trusty’s in Southeast D.C. or The Pug on H Street NE.

Activity: Aside from a tour of the West Wing, the next best option is the U.S. Botanic Garden, a greenhouse adjacent to the Capitol that boasts fauna from five different climates. On a warm weekend, wander Eastern Market on Capitol Hill for food, antiques and good coffee.