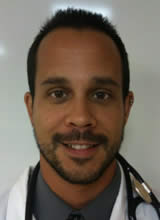 His hair is red, abnormal in a dark-skinned boy, and his belly is distended, although not as significantly as other children I have seen before. He is malnourished, has bronchitis and probably asthma, his nose perpetually running, and he takes deep breaths in before letting out a barking cough. He is unmistakably a child of poverty, but he’s wearing shoes.

Cheap, plastic sandals hang underneath the little feet that dangle off of the wooden bench he is sitting on next to his mother. They’re covered in mud, as are his feet, and are not offering much protection from the elements of rural Haiti, but they are shoes nonetheless. They’ll protect his feet from hookworm and other intestinal parasites that enter the body by burrowing into bare feet. He’ll be able to travel farther distances with shoes on, and when he’s old enough he’ll walk to school in those shoes, or a similar pair.

I can treat the parasites that are causing his belly to protrude, and educate his mother to boil or treat the family’s water to prevent recurrences. Families out here usually don’t have the money to pay for firewood to boil water, but since 2011 Project Medishare has manufactured and distributed chlorine to treat drinking water in the Central Plateau and she’ll go home with a bottle that will last a few months. His red hair is a sign of protein malnutrition so I’ll give him vitamins to boost his immune system and supplement his diet. But I can’t afford to buy every child a pair of shoes, so his lime-green sandals are a welcome sign of progress.

In 2006, the last time I was here, the children of the Central Plateau were starving to death, barely existing at a level of poverty that left little room for dignity. Most children had no shoes, running around on the rocky, uneven ground on the thick skin of the soles of their feet. They played in tattered clothing several sizes too large for them, or no clothing at all, making it difficult to attend school. Many of the houses were collections of thin, worn plywood covered by mismatched sheets of corrugated tin, leaving families exposed to the severe weather elements of the Caribbean’s rainy season.

The road to the Central Plateau could barely have been called a road. It was a path that wound through the mountains from Port-au-Prince — a meresuggestion where cars should drive, where the mountains would provide the least resistance to passage. Ravines opened up in the rainy season and portions of the road eroded or washed away in mud slides; a path might have been there in the morning and gone by the afternoon. The journey to the Central Plateau took anywhere from four to six hours, depending on the barometric pressure.

After two months of living in the Central Plateau in 2006, I left depressed, frightened, and questioning my future in global health. It took years to gather the courage to spend serious time abroad and face the abject poverty of the Central Plateau again, time spent searching for justice in a world where one child lives in a house with dirt floors and another chooses to pay an extra hundred bucks for a 32 versus 16 megabyte smartphone. When I came back to Haiti in the aftermath of the earthquake of 2010, I still didn’t visit the Central Plateau despite spending six weeks in Haiti. As soon as I returned in 2012, however, the time felt right to reconnect with the poorest region of the country.

Now, the road is in near pristine condition, beautifully smooth asphalt for the entire journey, carving sloping switchbacks in the side of the mountains and reducing the travel time to less than two hours. The new road seems to have brought life back to the region, an artery pumping nutrients to where they are needed most. There are markets spaced periodically on the side of the road that seem to be flourishing, and trucks carrying the fresh bananas and sugarcane of the region down to market in town where it will fetch a higher price. The cargo trucks that used to tip over on the washed out areas of the dirt path are now whizzing along the paved road. I imagine that one of them is loaded up with lime-green sandals.

Even once off the paved road, life has visibly improved in the Central Plateau. There are more concrete houses with roofs that are actually fixed to the underlying structure instead of merely resting on the plywood frame, and some houses are painted with the typical bright, pastel colors that are common to Haiti. Walking through the large town of Thomonde, people wear clothing that is relatively new: beautiful sun dresses, jeans that still have a deep blue color, football jerseys of NFL players from the last few years. Cell phones are ubiquitous, with the occasional appearance of a smartphone. In the deep bush outside of Thomonde, people are better housed and clothed, and cell phones have made significant in-roads. And while life has improved for many, there are still tens of thousands living in horrifying conditions, leaving a million reasons yet to act.

I notice the red-haired boy is not the only boy wearing shoes — most of the children in the deep bush have them now. Death used to be one illness or one flooding rain away for him and all the people of the Central Plateau, but ever so slowly it is fading. It is being chased away by a boy running in lime-green sandals down a beautiful asphalt road.