Haiti’s Carnival, or Kanaval in Creole, is not one weekend but an entire season, fusing the French tradition of pre-Lenten celebrations with a uniquely Haitian embrace of the transience of life. Every Sunday night for six weeks, the streets of Port-au-Prince erupt in thumping rhythms of music and people flooding the streets, making a pilgrimage either to downtown or to the main square of the upscale section of the city. Traffic slows to a crawl on the principal avenues uphill and downhill as the party rages in both directions. The weekly festivities are merely a prelude to the revelry that approaches, spanning the island of Hispaniola and culminating on Mardi Gras. 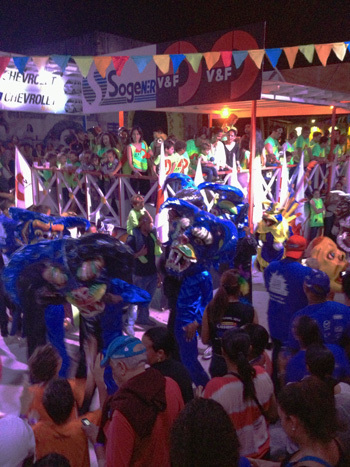 Each year, musicians release new material specifically for the Carnival season. Traditional Haitian kompa is layered with rara street beats and rapid dance rhythms to craft an aural scene fit for the festivities. The artists rap on television in colorful Carnival T-shirts, surrounded by curvy women in frayed and beaded versions of the shirts, showing extra skin and boasting of the season’s sexuality.

A week before the Kanaval in Jacmel, a private party in the mountains of Port-au-Prince approximates the later parades on a smaller scale. Viewing booths stand only three steps from the make-believe street below, a sort of Disney recreation of the typical chaos on the street. The spectators traditionally wear colored t-shirts representing the neighborhood of their origin, now replaced with t-shirts representing beer or mobile phone companies. At the private party, neighborhood booths are replaced by local businesses, each stand a representative of a business associated with the families partying within. A miniature parade features the paper mache masks of Jacmel and the rara bands that lead them. The first taste of Carnival provides only a glimpse of the spectacle to come.

The government designates an official city for the Kanaval celebration every year, and for the last three years, that site has been outside of Port-au-Prince, as part of the on-going effort by the government to decentralize the country. Regardless of the official city, Jacmel remains the beating heart of Haitian Carnival celebrations, both because of historical affiliations and the colorful tradition.

Along the principal street, young men work feverishly to construct the viewing stands where the public will perch to revel in the annual Kanaval parade two days later. The stands, constructed entirely of wood, are destined to hold dozens of people each and are emblazoned with colors and logos to identify the booths with particular groups and neighborhoods.

On Friday night in Jacmel, people gather on the main square for ten hours of music. People stand and dance on the numerous levels of the stepped piazza, the bobbing heads of the crowd creating contours and occupying all available space. Vendors hawk energy drinks, beer, French cigarettes and small bottles of rum. On the lower levels where the stage is not visible, few people stand and vendors place charcoal burning grills, cooking hot dogs and skewers of chicken. Band after band takes the stage, playing varying types of music — pop, rap, kompa, and rara — surrounded by colorful costumes, electrifying dancers and fireworks.

Arcade Fire storms the stage after one in the morning, with the ten members of the band, the crowd on stage mirroring that in front of it. With driving percussion, grandiose organs, and four backing vocalists, Arcade Fire sonically occupied every inch of free air in the crisp night. A Grammy-winning Canadian band that can sell out arenas across North America, Arcade Fire remains relatively unknown in Haiti, despite having played several concerts there over the last few years. They jam through their hits and large portions of the newest album, connecting emotionally with the diverse crowd, especially when they invite a rara band to share the stage with them.

The energy and flash of the weekend culminates in the parade through Jacmel on Sunday. Jacmel’s major claim to fame is the paper mache masks that the revelers don to participate in the parade, parties, and dances. The masks are typically variations of animals, often colored in hues that don’t exist in nature—red jaguars, blue monkeys or green cockatoos. More frequently, however, the masks represent a terrifying hybrid of demons, animals and humans. People of short stature, occasionally children, wear the oversized masks that can reach to their waist, only dancing legs visible underneath. Hand-sculpted metal butterfly wings accompany demon masks with monkey faces and devil horns, creating a Kanaval version of the flying monkeys from Wizard of Oz. The groups of masked demons are punctuated by rara bands, musicians playing on home-made instruments. Large bass drums, tin cans, and long metallic horns welded together from rolls of sheet metal produce a sound that is both modern and ancient, a mélange of Haiti’s African and indigenous roots and demonstrates the uncanny ability to transform refuse into something functional.

The demons represent the sin and hedonism of the pre-Lenten festival , masks freeing revelers from the confines of Catholicism while mixing in Haiti’s tradition of voodoo. Each mask satirically reflects on the history of the Haitian people: honoring their African tribal ancestry, embracing the freedom of the indigenous people of the island prior to colonization, and mingling with the rich Catholic tradition imparted by the French. The launch of the season celebrating the resurrection of the Messiah in the Catholic faith, inaugurated by Ash Wednesday, offers an opportunity to reflect on the fragility of life and the perpetual promise of everlasting being. Ash Wednesday reminds Catholics that humans cycle “from ashes to ashes, dust to dust” and Carnival worldwide provides a final chance at indulgence before the purification of the Lenten season. In Haiti, in particular, the constant spectre of death and the syncretism of voodoo influenced the development of a Carnival strongly rooted in the celebration of life through flouting and flirting with death. 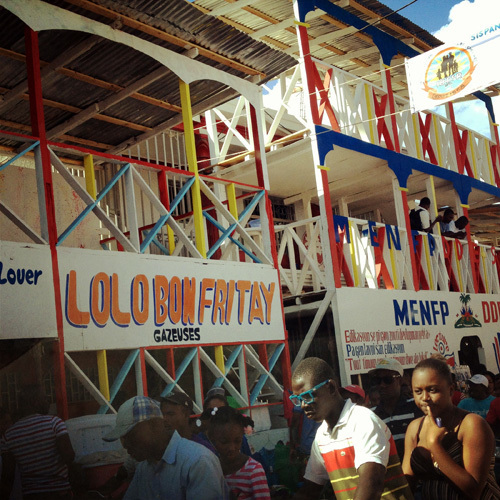 The viewing stands, hastily constructed only days before, were inspired by the balconies of the houses that once lined the boulevards of Jacmel, now fewer in number with the passage of time. Closer to the street and not as structurally sound, the viewing stands offer a thick immersion in the parade along with an element of danger, teetering on the brink of collapse. The tradition of New Orleans’ revelers engaging in the parade from on high is a remnant of the Haitian influence on the Mardi Gras celebrations. In fact, the New Orleans architecture and balconies are an imitation of Jacmel, copied by the emigres from the city after Haitian independence in 1804.

The parade proceeds down the main street of Jacmel on Sunday. Demons, feathered animals and musicians produce a cacophony of colors and sound. Arcade Fire rejoins the festivities, playing their hits from aboard a moving float and surrounded by rara dancers. Sweat pours on the ground, expelling the sins accumulated over the last year. The spectacle rivals the Carnival celebrations in Venice, New Orleans or Rio de Janeiro in scope and color, but Haiti celebrates death and rebirth like nowhere else on this earth.