Practicing medicine in the tropics entails more than its fair share of the unpredictable, a factor that only increases during Atlantic hurricane season. Last month, as Houston was flooded by Hurricane Harvey’s relentless rains, Haiti pitched in to help.

Clean water is a perennial issue in the island nation where I serve cancer patients through my nonprofit organization, Innovating Health International (IHI). Hurricanes and other flood-creating tropical storms increase the risk of deadly cholera epidemics. Last year, when Hurricane Matthew devastated Haiti’s southern coast, my professional partner and good friend Jack Brewer stepped in to provide 600,000 water purification tablets — each one enough to treat a gallon of dangerous river water — to villages that had lost their already limited access to clean water for drinking, bathing and household cleaning. 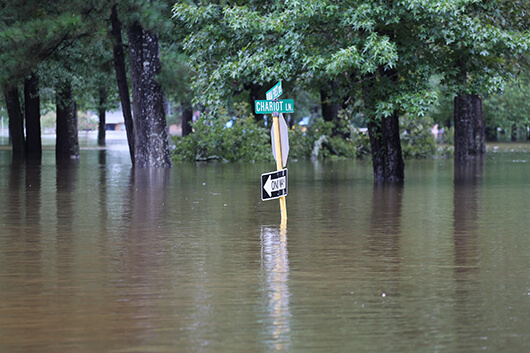 As Houston flooded beneath Hurricane Harvey in August, water became a problem in more ways than one. Photo by Jill Carlson, jillcarlson.org.

Brewer, a former college and professional football player and business executive, is a native Texan. This year, while he was watching Harvey’s devastation of Houston and its Gulf Coast neighbors and hearing reports that tens of thousands of people were trying to survive without water, a light went on. Rather than meeting that need with expensive and wasteful shipments of bottled water, he thought, why not use water purification tablets instead?

The tablets aren’t easy to come by. Their use in the U.S. is largely limited to backpackers’ canteens and the kitchens of remote homes that rely on well water. Federal regulations allow only smaller doses that purify one a liter of water at a time, rather than the five-liter tablets available on the international market. Unfortunately, the U.S. manufacturer was unprepared to respond to the disaster in Houston. Most of its tablets were in places like Yemen, the Middle Eastern nation wrestling with a cholera epidemic in the midst of a terrible war.

The situation led Brewer to conclude that the most cost-effective and readily available option left to him was to purchase water purification tablets in Haiti and bring them to Houston.

So on the afternoon of Monday, September 4, IHI staff in Port-au-Prince bought up 250,000 tablets. Jack flew to Haiti the next morning, staying just long enough to pick up the two duffel bags and eat a quick breakfast before taking off for Houston. Jack and I, and our colleagues at the Jack Brewer Foundation and IHI, all relish the irony that for once Haiti could help out Houston. Our Haitian staff at IHI were especially proud to repay all that the U.S. has done to respond to recent natural disasters. Now, for less than two cents per gallon, thousands of Houstonians could have clean water they could drink or use to brush their teeth and clean vegetables without having to haul water bottles or waste plastic.

As Jack took off for Houston, Haiti was under a hurricane warning of its own. Hurricane Irma was bearing down on the island of Hispaniola, a Category 5 storm with the potential to kill thousands of people and leave many thousands more homeless if she struck full force.

As the week wore on at IHI, we decided to cancel the chemotherapy clinic we’d scheduled for Friday and asked those patients to come Thursday morning instead, just hours ahead of the storm. Eight patients turned up, affirming the pattern we have seen so far in four years of treating cancer in Haiti: When armed with information on what is best for their health, our poor and often poorly educated patients will act responsibly to take care of themselves. Seeing the chemotherapy ward full of patients that ominous morning flooded my heart with hope. We all made it home by 2 p.m. and hunkered down for the storm to come.

Irma spun just far enough to the north that most of Haiti was spared. Some flooding occurred in towns along the border with the Dominican Republic, but the storm caused only one reported death and forced 8,000 into shelters by Friday morning — a low number for Haiti in the aftermath of a hurricane. Most of the houses in that area would be livable once the waters receded. In the end, the government would even be able to disband its emergency response measures by Sunday night.

As Haitians breathed their sighs of relief, Irma turned toward my hometown of Fort Lauderdale, Florida. On Friday morning, my family and friends had started to evacuate. Some headed for Atlanta, a drive that took them twice as long as usual because of road congestion. My father, in his capacity as a Veterans Affairs hospital administrator in Miami, worked to plan the evacuation of patients and secure the facility. From Haiti, all I could do was watch.

I was ecstatic that the storm had mostly bypassed Haiti, but now my parents and brother were in the expected path of a storm that had once again strengthened to Category 5. I worried about my parents’ home, which lies in the flood-prone strip of land between the ocean and the intracoastal waterway. Dealing with these events only gets harder as they get older.

For days, Irma kept everyone guessing. Gainesville, the inland home of Florida State University where I work when I’m not in Haiti, was briefly expected to receive a direct hit. I made a mental list of things that I might have left near windows or on the floor of my home. Other than my car, I thought, nothing of real monetary or sentimental value is there.

Then, for the second time in a week, Irma spun in a different direction. Relieved once more that the storm wasn’t going to destroy the places I love most, I watched ruefully as Irma ravaged Florida’s Gulf Coast. You never wish such devastation on anyone.

Response to the storm was chaotic. Many Floridians who live along the Atlantic coast had evacuated to Tampa, which turned out to be the South Florida city hardest hit. Upstate, Gainesville flooded and lost power. Some of my colleagues slept on the hospital floor since they had nowhere else to go. Irma even caught up with my friends who evacuated to Atlanta only to witness a much weakened version of the storm.

Hurricanes have the power to remind us that whatever our circumstances we’re not so different after all, either in vulnerability or our desire to help others. Low-lying and poor places like Haiti will continue to feel Mother Nature’s wrath most acutely, but Harvey and Irma showed Americans once more that some of our favorite places at home will not be spared either.