We purchased cups of freshly sliced mangoes, and I paused to take a one-handed picture of the church located in the middle of the square, the afternoon sun casting shadows on downtown Medellin. A hand was placed softly but firmly over my shoulder, like a stern father directing his child, and I felt a strong pull at my throat. I held my breath and waited for the feeling of a sharp stick of cold metal in the small of my back, blood spilling down my shorts and onto the ground of Plaza Botero.

No knife followed, and I realized too late what they actually desired — the thin gold chain around my neck. I clasped at my empty neck and attempted to pivot toward the thieves, but another pair of hands pushed me from behind, forcing my body out of harm’s way. I turned to see my friend’s hands gripping my arm, preventing me from pursuing the thieves. I flashed to my grandfather, dead for 15 years now, who had purchased the chain for me as part of the spending spree that signaled the decline of his faculties, just before he shared my bedroom with me and prior to moving to the nursing home when the dementia became too much. The four thieves, grown men dressed in designer T-shirts and jeans, stalked away slowly, making eye contact with me before turning up the street perpendicular to the direction we were walking.

And then it was over, a mere 15 seconds from start to finish. I picked up the cup of sliced mango that had fallen on the ground upright but found no fork. We snapped a few photos of statues in the plaza and passed transvestite prostitutes trolling for customers before escaping into the safety of the Fernando Botero museum.

In 10 years of travel in more than 40 countries, I had never before been the victim of a robbery. I only lost a plastic fork and piece of metal — not a kidney or my life. My memories of my grandfather are unconnected to the inanimate object, and perhaps the lore surrounding the robbery will even strengthen his memory for me. 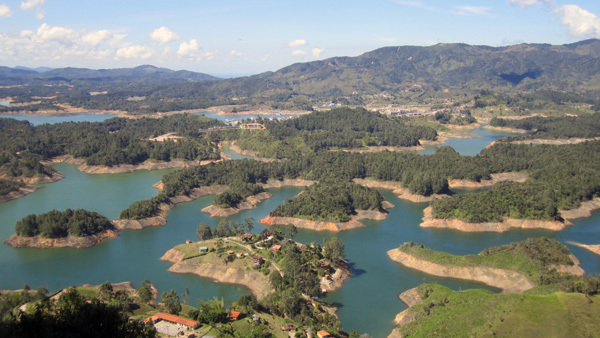 The trip to Colombia would not be defined by a violent crime but by the natural beauty of the country and the people, and the richness of the culture. Medellin offered a mix of natural beauty coupled with cosmopolitan buzz. During the day, old men ring the classic plazas, drinking aguardiente while impossibly curved (and surgically enhanced) women strut through the streets.

The next day, we left the commotion of Medellin behind for the balmy freedom of coastal Cartagena, where the three-day fiesta commenced and sleep disappeared. Cocktails and dinner were served on Thursday night at a four-story chateau complete with an elevator and roof-top patio. Friday morning we boarded a boat with 50 friends and jetted to a secluded island off the coast of Cartagena. We feasted on whole fried fish, sipped beers while wading in the gentle waves and received professional massages from locals. That night was the rehearsal dinner, an event the size and scope of an actual wedding. Tables for 400 people surrounded the pool of a swanky hotel, while a buffet featured fish and meat, cheeses and vegetables, and five choices for dessert, each more decadent than the last. As the pseudo-reception wound down, a dozen people headed downtown to a Cuban salsa club. We danced salsa until the morning, sleeping only three hours before a brunch that included world-famous ceviche at La Cevicheria.

Fresh from a month in Haiti, I bathed in the opulence, releasing the resentment that usually plagues me when shifting between such contrasting degrees of wealth. I needed the change from the privations of Haiti, a vacation from the burden of living in and around poverty. The class warrior rested for a week while the anthropologist in me was allowed to experience every detail of Colombian life, even the most affluent ones. I enjoyed spending time visiting the culture as much as I had enjoyed living an aesthetic existence in rural Rwanda — they both represented a slice of life, celebrating the diversity of man’s reality.

Even so, I was wholly unprepared for the grand wedding festivities. The convention center of Cartagena bustled with the activity of 800 people, a small village really, all there to celebrate the union of a young couple. Men sported simple guayaberas, but the women dressed as they would for the tropical wedding of a prince — colorful dresses, each displaying skin in creative ways but sophisticated and dignified. The buffet table was lined with two types of local fish, roast beef, marinated pork loin and roasted chicken. I piled my plate high with grilled asparagus and squash, cherry tomatoes, diced and buttered carrots, careful to avoid bread and pasta, which would limit what else I could consume. I drank scotch on the rocks throughout the night in order to maintain agility on the dance floor. Whenever the scotch was watered down by the melting ice, a gentleman waiting on the table would provide me with a fresh glass and spoon the ice but allow me to pour the quantity that I desired.

Throughout the night four live musical groups and two DJ’s rocked the dance floor. The 15-piece salsa band gave way to the Menudo cover band that then yielded the stage to a buxom woman with strong pipes and sensual dance moves. The dance floor vibrated when popular songs blared out of the speakers, and the voices of the revelers nearly matched the volume and intensity coming from the band onstage. When my body, sore from two nights of marathon dancing, finally cashed out after 4 a.m., I left the party with 200 guests still there, many who partied until the DJ powered down the turntables at 7.

Twenty-four hours and three flights later, I showed up for an 84-hour work week in Florida, exhausted but full of life, ready to dance more, converse more and mix it up again. I noticed the missing chain in the mirror when I put on scrubs before work, but once there, I bounded through the hospital hallways, a spring in my step that had worn away, now returned.