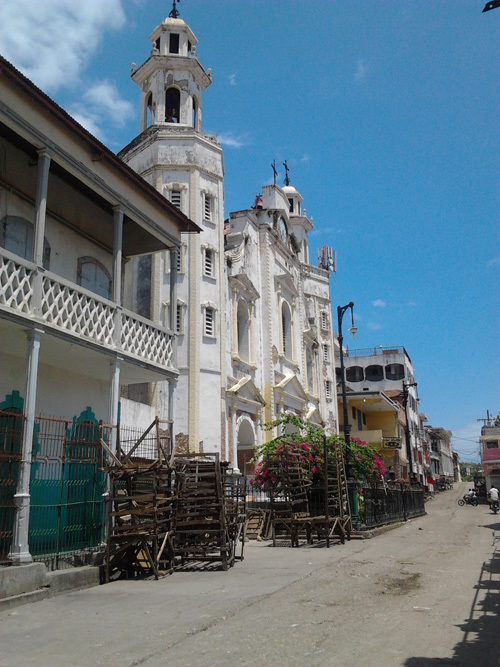 I initially ignore the drunk man on the street with bloodshot eyes and breath reeking of cheap rum, a self-defense mechanism learned in years of city life, but he has gentle face and we start talking, first in Creole and French and then mixing in English and Spanish. His intelligence is obvious even through the inebriation, and he says that he’s a chef and an artist and convinces us to walk with him to his restaurant.

At first, my guard is up, casting glances around every corner, suspicious of every man I pass on street. As he recounts the histories of the buildings we pass, many of them destroyed by the earthquake in 2010, he senses my taut body language. “Don’t worry. This is Jacmel, not Port-au-Prince. You are safe here.”

We turn a dark corner and come upon a group of men playing dominoes who ignore us. Our intoxicated guide points out the art galleries and studios that Jacmel is famous for. Another turn and we’re in a small park where children are laughing and playing in the trees. Women sit on the stoop of the houses braiding each other’s hair. “Bonswa,” they respond in the characteristic lilting fashion of Haitian women.

We arrive at the restaurant — a group of tiki huts situated on the beach — and are greeted by the sound of the crashing ocean, the night too dark to actually see the waves. The waitress, all curves and full of warmth, touches my arm to emphasize how well the fish is grilled in the lemon creole sauce. The air smells of the ocean instead of car exhaust and burning trash. I feel the tension melt out of my muscles in my jaw. I relax my shoulders and my eyes stop darting around. The danger and stress of Port-au-Prince, real or imagined but ever present in the mind, starts to fade.

The day before, we were in Port-au-Prince debating what to do with a much needed day off. Some expatriates live the high life in Haiti, dining in fine restaurants and spending every weekend at a vacation spot or luxury hotel. Others live a simple life of privation in the rural areas or spend all their time in Port-au-Prince in service. We fit snugly in the latter group, and happily so, but after enough time, even the toughest souls wear down.

“Let’s get out of Port-au-Prince. I need a break and I want to see the country. I’ve never done anything here but work,” she said to me. We finally decided to spend a day in the south of Haiti, in the city of Jacmel. In typical martyr fashion, we worked until four in the afternoon on Saturday before heading to the bus station, densely populated and occasionally home to disagreeable characters.

The two hour trip felt too far, too difficult for two blan to navigate via public transportation, and apparently we chose to board the wrong tap tap. An hour into the trip, as the sun was setting and the rain clouds were closing in, the van sputtered and choked up the mountainous road. The engine eventually died, and the passengers all sat on the side of the road, wondering if darkness or the rain would descend first. Just as we were getting comfortable with the idea of spending the night with a family in their hut on the side of the road, a car with two empty spots pulled up. We milled about with the other passengers until it was clear that nobody else was going to take a seat so we hopped in. The man with 20-inch biceps drove the rest of the way, flashing a pair of handcuffs out the window to the car that was tailgating us from behind while on the winding roads overlooking cliffs. We would arrive in Jacmel after dark.

“This worked out well.”

“Until we end up handcuffed to something.” 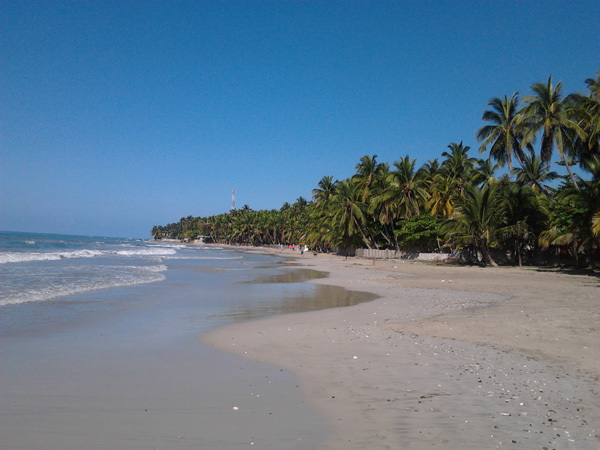 After the quiet stroll and dinner on the beach, we spend the night in what was formerly a French-owned private home, and is now a chic hipster hotel, the bare brick walls covered in Haitian art. The staff is sincere, and the coffee is the color and consistency of mud. We wake up the next morning and ride a moto taxi — something I refuse to do in Port-au-Prince since working at a trauma hospital — to a small, secluded beach ringed by thousands of palm trees gently swaying in the breeze. There’s a French couple laying under the trees and an obese man struggling to stay afloat on a raft, but we’re otherwise alone with locals — adolescents playing soccer in the sand, men fishing for lobster and conch and dogs with long teats dragging in the sand.

We pass the afternoon wandering the streets of the city, admiring the culture and architecture. Jacmel was a coffee trading port in colonial times and was one of the sites of the initial rebellions against the French. Most of the old city that was built after a fire in 1896 still stands and the architecture reflects the heavy French influence. “It looks a lot like New Orleans,” I comment. New Orleans’ architecture was actually designed in Jacmel’s style, largely due to the influx of Haitians and French émigrés after the Haitian independence of 1804.

Now, Jacmel is the heart and soul of the Carnaval celebration every February. The large voodoo presence inspires paper mache masks of animals, many with demonic characteristics, which are the focal points of the parades and dances of the pre-Lenten revelries. During the rest of the year, the walls of every restaurant and hotel are adorned with leopard heads and over-sized cardboard iguanas.

Sunday is market day and we’re offered goat heads (for soup?) and cow hearts, picking our way through the crowd. We’re the only blan we pass all day in town, but our presence is nothing out of the ordinary, just another set of customers in the busy market. I take pictures of the colorful buildings and admire the design of the wrought-iron balconies attached to dilapidated structures. We order lunch in a hotel on the town square with low-set white awnings, and are served spaghetti loaded with ants. They’re dead, cooked into the meal, but providing additional protein to weary travelers.

The sun starts to sink, and we’re baked from the constant overhead beating. We pack our things and catch a tap tap—this time one with a functioning engine—only to sit in traffic on the fringe of Port-au-Prince. The city crawls with people, like ants on spaghetti, and welcomes us home with traffic, smoke and trash piles.