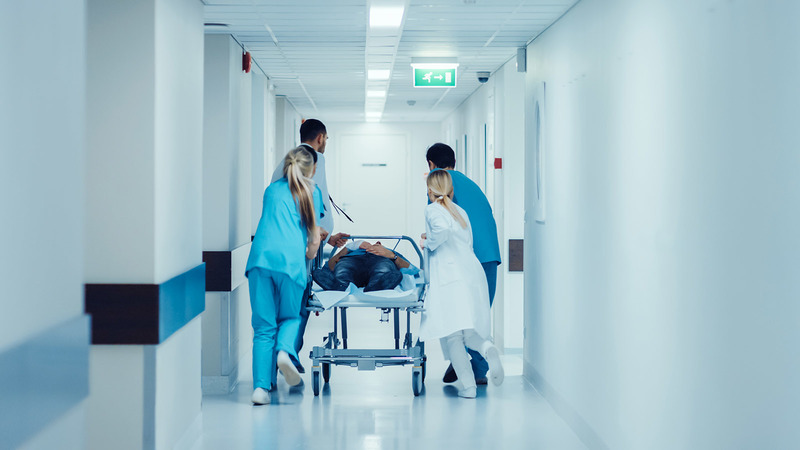 “Let’s start the powwow,” a man with a brown jacket and braided ponytail said with a smile. Nineteen adults and one child filled the back conference room of the hospital. The hospital had made an industrial cylinder of coffee for the meeting, and it was almost completely drained. I hung the stethoscope around my neck, knowing I wouldn’t use it as anything but a prop to signify my training and inspire confidence for the discussion ahead.

In my 10 years as a doctor, I had never once participated in a family meeting with even 10 people, let alone 20. Some among this group had driven more than three hours through the desolate desert of the Southwest to discuss the health of their aunt, sister, and grandmother. She was one of 21 siblings, and roughly half of them were in attendance in that conference room.

We had started planning the meeting a few days prior with three of the patient’s sisters. I had explained the issues and helped them distill down the discussion points, and I hoped to avoid a meeting with the larger family. Too many cooks, in my experience, usually makes family meetings unproductive — especially when members who aren’t generally involved in their relative’s health suddenly decide to take an interest. Perhaps out of guilt, they often attempt to compensate for their lack of routine interest by asking for the impossible, both from their relative and the medical community. But the sisters insisted that a meeting was necessary, so I quietly acquiesced.

On Saturday, I opened the meeting by thanking everyone for traveling so far and for their interest in Edith’s health. I explained her active medical issues and what I thought could help reduce her chances of being hospitalized again in the future. The small skin infection she had was common and relatively simple to treat.

I explained to the group that the infection that had precipitated her hospitalization was not preventable per se, but that poor control of her diabetes certainly makes it more likely to occur. Her oldest brother was stern in his reproach.

“She has brought much of this upon herself by not taking her medications,” he said.

“Perhaps we could keep all sugary snacks and sweets out of the house by not even buying them in the first place?” I continued, ignoring what I felt was an unhelpful and antiquated version of patient shaming.

“People take her to the Dollar Store to buy her things when she complains or seems sad. Also, her grandkids like eating the junk food as well,” offered one of her sisters.

Her brother cast a suspicious eye at the young adults sitting at the end of the table. Perhaps there was more to the story. Intergenerational conflict, in my professional experience, usually has money at the root.

“Our law provides for the ability of the family to place a family member in a nursing home if they believe it to be in their best interest.” Her brother repeated this assertion three times throughout the 45-minute meeting. His motivations were impossible to read, though it was clear that he wanted solutions. Perhaps he believed she was wasting family resources bouncing in and out of the hospital, or that her poor choices had led to the point that she now required institutionalization. When I suggested that she might simply need reminders for taking her pills, he cut me off with a wave of his hand. “Doctor, we have been here with her before.”

Her granddaughter and grandson added to the criticism. “She often doesn’t want to leave the bed or the couch. I ask her to get up and take her medications. I end up having to cook often as well.”

After a few minutes of discussion about Edith — talk that basically ignored her presence and treated her like a child to be directed — the room fell silent. I asked Edith what she thought of what her family was saying.

“Much of what they say is true. I like to eat candy. It makes me happy for a little while, and I’ve been so sad,” she said. She had lost a daughter and a son in the past few years, and in the process “lost the will to live.” That, she explained, is why she’d been lax with her medications.

“I just wanted to be with them — to see them again in heaven,” Edith said. “Even my grandchildren don’t need me anymore.”

She continued to talk about the adult children she had lost: How they were taken from her before their time. How a mother should never have to live without her children. She teared up as she choked out the words, and the entire group slowly followed her lead. Her sisters wiped their eyes gently with tissues. Her niece wept quietly while her toddler played at her feet. A few of her brothers teared up, unwilling to let further emotion creep down their faces. Even the outspoken oldest brother looked on in silence — though no tears were in his eyes, he stayed completely still for the duration of his younger sister’s story, listening intently.

“I want to see my great-grandchildren grow up,” she said. “I want to see Mandy graduate high school. I’d like to be at her wedding even. Maybe.” She finished up and the room was quiet save for the silent sobs of the family and the babbling of the toddler.

Through tears, her granddaughter responded with a heartfelt apology.

“We all really want to help you,” she said. “We’re here for you, Grandmother.”

The tension slowly drained out of the room, a denouement achieved. Through the windows, the sun peeked out from behind the clouds, illuminating the scrub desert and lightening the family’s mood. I drew a deep breath into my lungs, exhaled the lump in my throat, and walked back down the hallway towards the doctors’ office.

Edith’s oldest brother pulled me aside after the meeting to confirm what had hung in the air.

“Her grandchildren are spending her money,” he said. “I don’t think they’re taking that great care of her. They have parties at the house with alcohol and meth.”

There it was. The reason for his insistence that she needed to get out of the situation. The reason why he seemed so opposed to her going home to live with her grandchildren. It wasn’t his sister’s behavior that worried him; it was the kids’.

He explained that, through his role on the advisory council for the Navajo Nation in Arizona, he had tried to initiate the process that removes abused elders from dangerous situations. The council can offer assistance for cases like this, but with Edith and her brother, they feared a conflict of interest. Without help from the council, she remained in the care of her grandchildren — young people whom she loves being around, he explained, but who take advantage of her.

He was not the stern older brother who didn’t understand the modern conceptions of illness, medication adherence and depression. He was simply at the end of his rope, not seeing many options to offer proper care to someone he loves. He knew that getting the kids to get off the alcohol and meth was much harder than simply pulling his sister out of the situation entirely and moving her to safety. Perhaps once her money was no longer available to them, their meth habit would dry up as well. His elegant solution to a complex social problem was admirable, but not something he could have communicated in the meeting.

Yet Edith’s moving elegy to her children and her clear cry for help had impacted the entire group. Her older brother understood that she preferred to be at home with her grandkids, even if the circumstances weren’t ideal. And the grandchildren seemed affected as well — perhaps they better understood now their importance in her life and the impact that their behavior had on her. She was discharged home the next day, sent out in a wheelchair pushed by her loving and flawed granddaughter.