The shelves at the new supermarket in Petionville, the upscale area of Port-au-Prince, are stocked with everything a consumer could ever want. Ten types of hot sauce sit neatly in rows, labels facing out. An entire aisle bursts with soft drinks, juices and Gatorade — empty calories packaged in colorfully-designed bottles, attracting shoppers like a bright flower lures bees to nectar. The dozens of toothpaste brands that paralyzed me with indecision upon my return to the United States from Rwanda now haunt me in the mega-plex, a pseudo-Walmart of Haiti. The imported goods cost 30 percent more here than they do in Miami.

Walking up and down the aisles, my olive skin is darker than most of the other patrons’, and $70,000 SUVs with tinted windows clog the pristine parking lot. The deluxe supermarket represents the new Haiti, perhaps even the coming Haiti, but not the economy of the real Port-au-Prince, which is found on the streets, alleys, tap taps and sidewalk markets. Economists might label it the black market or underground economy, but in a country with seventy percent official unemployment, the underground drives the commerce engine that keeps the city alive. 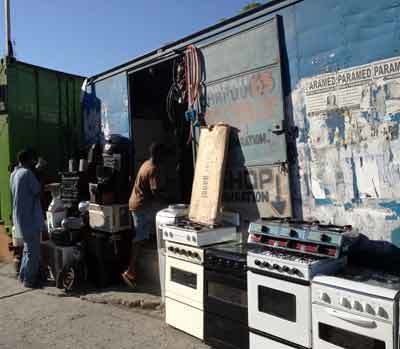 There are few places that a visitor from a developed country would consider a store or a business. Instead, the economy of the city thrives on truly small business — a woman selling vegetables, a teenager vending socks, a man with a basket on top of his head hocking medications, mostly labeled, some not. Groups of men sit on the side of the road repairing inner tubes for tires of all sizes, and others stoke fires to heat and reshape metal parts in order to fit in different cars than they were intended for. Concrete walls in cleaner parts of town are covered with large paintings and artistic metal works hanging from a thin rope, hastily run between two telephone poles. Antiquated televisions, blenders and radios are sold outside of brightly-colored concrete shacks, carefully dusted each morning, but typically permitted to endure light rain before a heavier downpour forces the businessmen to move their wares back inside. Muscled teenagers drag massive blocks of ice with iron tongs, dirtying the ice that will later be sold to keep food and drinks refrigerated.

The Sunglass Hut in Port-au-Prince consists of a young man holding a rectangular piece of cardboard attached to a broom handle by strings of fabric tied together, holes torn or cut through the cardboard allowing the glasses to sit snugly in their position, same as they would in a twirling sunglass display in a drugstore. The three dozen wire and plastic glasses were all made in China, shipped to Haiti where they are sold by a young man on the street, still at a cost of less than three dollars. How many pairs does he have to sell to buy dinner that night?

The most ubiquitous small business revolves around water, ever changing with the times. When I was in the main marketplace in Haiti in 2006, women would carry large buckets on their heads, water sloshing around with each step. In their left hands they would hold a metal tray with three matching cups, using the right hand to grab a cup, dip it in the bucket balanced on their heads, and offer hydration to the customer, who would then place the change and the cup back on the tray to be reused. In the modern version, she has a sack of woven plastic balanced on her head, packed with eight ounce plastic bags that she grabs with her free hand while taking 25 cents from the thirsty customers. After biting the corner of the bag off and squeezing the contents into their mouth, the bag is immediately tossed down onto the ground, creating the single largest cause of litter in the city. 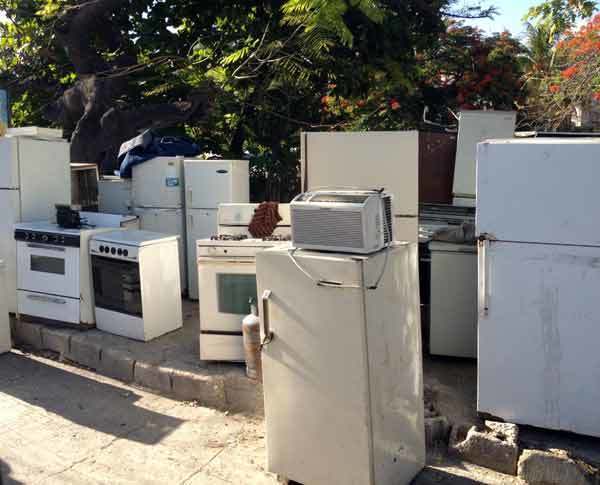 Digicel, the Irish cell phone provider with a near monopoly in Haiti, employs the most people aside from the government. Men dressed with red aprons emblazoned with the ever-present Digicel logo, hock cell phone minutes on cards and phones as cheap as five dollars. The men, called papadap in Creole, can also enter a code on their phone and send you the minutes wirelessly. I’m told that in the near future this type of virtual transaction will be the only form of currency, replacing cash and credit cards. In some way then, the underground economy outpaces the sluggish American system.

Instead of aisles of nectar in plastic bottles, the street sells sodas from coolers or broken refrigerators used merely for the insulating properties. To keep them cold, they start off frozen solid and throughout the day the tropical heat melts them first to an edible Coke slushy, then to a chilled drink. Mobile soda salesmen dodge traffic while slinging a cardboard box, insulated with rags and connected to a string that hangs off the shoulder.

Public transportation is a private enterprise, keeping the city moving for those that don’t have access to a privately-owned car. Tap taps, brightly-painted trucks with roofs welded on top of the bed in order to accommodate a dozen people, charge passengers 25 cents for a ride across town. Massive white buses donated by the US and dubbed “Obama” have passengers hanging out of each window and crowded on the steps, the last person with one foot on the lowest step and the other dangling perilously in space. There are virtually no taxis, but private cars are utilized as part bus, part group taxi, heading in a general direction of town, letting people on and off wherever they need to conduct business, but generally moving faster than the tap taps because of the fewer passengers.

I sport two dollar sunglasses and enjoy the delicate peanut brittle-like tablet that is sold on the roadside journey to the beaches out of town. I savor the texture of a frozen coke, licking my lips, tasting the salty flavor from the rim of the plastic bottle, somehow contaminated by the dirt on the ice that manages to sneak underneath a closed cap. I swat at mosquitoes with a tennis racket shaped bug zapper purchased on a street corner for four dollars. And then, when necessary, we make a pilgrimage to the mega-plex, cowed by the choices and the prices, wondering what is going on outside the walls, down on the street.