I got the call at 4 p.m. on Wednesday afternoon, sitting at my desk in the Innovating Health International cancer center in Port-au-Prince. Two tourists had become gravely ill on a cruise ship docked in the north of Haiti. In independent events, both of their hearts had stopped beating and bystanders had intervened with CPR until the ship’s medical staff could arrive. The medical helicopter service I work with, Haiti Air Ambulance, was tasked with transporting the patients from the ship to the international airport in Cap-Haitien where evacuation jets would be waiting.

“We might have to stay the night, so pack a bag,” the lead paramedic, Brooks, told me as I boarded. In four years of working with Haiti Air Ambulance, neither helicopters nor crew had ever stayed out past dark, even in the wake of Hurricane Matthew. In fact, the US Federal Aviation Administration (FAA) forbids us from flying at night, given the lack of radar and accurate weather reporting over Haiti’s mountainous terrain. An Air Ambulance was already en route for the sicker patient, who was connected to a ventilator and would be flown by jet from Cap-Haitien that night. The helicopter I was boarding would be transporting the second patient, and, by the time I arrived at the base, the narrow window in which to collect him before nightfall was already closing.

We took off within minutes, and, as we approached our destination, the first helicopter was visible on the narrow concrete dock linking the pristine beach with the massive cruise ship. The pilot expertly landed our craft directly between the first helicopter and the ship, navigating between two low concrete walls with a few feet to spare on either side. We hustled onto the ship with our equipment and stretcher in tow. “We have to be off of the ship no later than 6:30,” Brooks said, “or we won’t make it home before dark.” It went unsaid that missing that deadline also meant the patient would not make it to a hospital. 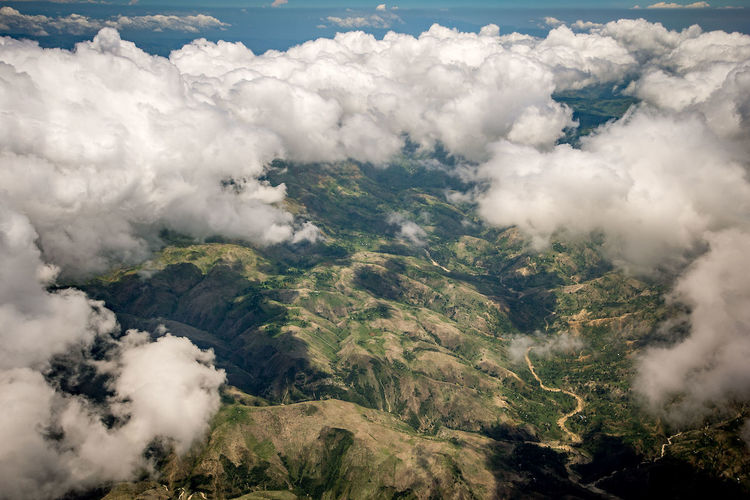 An aerial view of the Haitian countryside. Photo by Matt Cashore '94

The crew of the ship hadn’t received approval from corporate headquarters in South Florida that the passenger was allowed to leave. It didn’t seem to matter that the passenger and his wife both wanted to leave the ship, or that this was the passenger’s last chance to leave before the cruise embarked on two days at sea. Mario’s heart had stopped suddenly and without warning on the beach at noon, but he seemed no worse for the wear at that point.

“We have to depart in ten minutes because of the sunset,” Brooks informed the ship’s lieutenant, “so you have eight minutes to secure approval or he’s stuck with you.”

Mario and I talked about his health and medical history to pass the time. He had a discernible New York accent and a Southern Italian last name, and we quickly bonded, almost as if we were lost cousins. My latent New Jersey accent surfaced, as did the less refined portions of my pushy personality.

“Can we at least move him to our stretcher to minimize the loss of time if we can take him?” I asked the crew with impatience in my tone.

“He is not leaving the ship until I receive approval,” the lieutenant sternly remarked to us. “Haiti could pop off in violence at any minute, and we can’t be responsible for him being out there in it.”

Realizing the racially-tinged ignorance I was up against, I stopped fighting – though we continued to prepare Mario for transport, under the disdainful eye of the lieutenant. The crew finally received approval from some lawyer in Miami, and we exited the ship right as the alarm was going off to remind us to retreat immediately or risk sleeping out in the helicopter with the patient.

The evacuation company couldn’t launch a second jet that night so we had to wait until morning for his pickup. Instead of taking him to the airport in Cap-Haitien, we were headed to Port-au-Prince and its more sophisticated hospitals – a significantly longer journey. The pilot, Phil, gunned the engine to 90 percent power, rocketing straight into the wind in an effort to reach the capital before the sun set at 7:29. Twenty-five miles from the city, we ran into a wall of thunderstorms.

“What happens to helicopters if they’re struck by lightning?” I asked.

“Not good things,” came the retort from Brooks.

Between the 3,500-foot-high mountains and the low-lying storm clouds, there was no space for a helicopter to squeeze through. Phil attempted to sprint to the west around the storm, but we were blocked there as well. He quickly banked the helicopter and turned back north towards Cap Haitien. We landed at the airport there at 7:28, a minute prior to “drop dead time.”

Sitting on the tarmac waiting for an ambulance to pick us up, we had time to get to know one another. Mario is a chef in a kosher Italian restaurant in Brooklyn. The Jewish population of Brooklyn appreciates pizza as much as the next person, but they require separate kitchens for milk and meat, eschew pork and shellfish, and require pasta made from potatoes and tapioca during Passover. Undocumented Mexican immigrants under the direction of a grizzled paesan making Italian food for Orthodox Jews warmed my heart, the epitome of New York and America at its best.

“He even makes kosher mutzadel,” his wife, Gina, added, using the old Southern Italian dialect for mozzarella, held frozen in time by Italian Americans from the days when our relatives emigrated.

The nearest hospital of any quality was 40 minutes away by ground in the dark, so the team made the decision to stay in a hotel. Mario seemed stable, and even if something did go wrong, we were prepared — with our helicopter’s equipment and crew on hand, we could treat an ICU-level patient even within the confines of a hotel room. After an uneventful but sleepless night checking on Mario every hour or so, we took turns at the breakfast buffet, packed our equipment into the van, and prepared to head out.

“I don’t feel so well,” Mario suddenly muttered, right before he slumped in his chair, pale as death. His heart had stopped beating again. Brooks ran down the hallway screaming to our colleagues to come back and bring all the equipment from the van immediately.

With the team rushing to gather our equipment outside, I served as Mario’s sole care provider, administering chest compressions while Gina fretted behind me.

As the medical director, I had ultimately made the decision to stay in a hotel instead of a hospital, and my professional life flashed before my eyes as I faced the consequences of my choice. This man could die because of me.

I quieted my mind and focused on the compressions, trying to break as few ribs as possible as I waited for what felt like hours for help to return. By the time they did — about four minutes later, in reality — his pulse had returned. We strapped him in an oxygen mask, ran through a litany of medications and treatments, and as the color returned to his face and extremities, I inhaled deeply, glad to be out of the woods for the moment.

The latest crisis over, we flew to Port-au-Prince, landing about an hour before the evacuation jet’s scheduled arrival time of 12 p.m. We decided to wait at the helicopter base instead of a hospital — what more could go wrong?

“Mario,” I said, dripping with Jersey sarcasm, “as long as you keep your heart beating, I promise I won’t break any more of your ribs.”

Exhausted, we waited — Mario under careful supervision, Gina making calls to family in New York — as the jet’s arrival time was pushed back to one. Then two. Then three. At 3:30, we finally received word of the jet’s imminent arrival. We loaded up an ambulance, double-checked the supplies, and roared through the streets of Port-au-Prince, sirens blaring, until we reached the airport.

After a lengthy discussion with the doctor on the medical jet, it was finally agreed that Mario was stable enough to travel. We loaded him onto the narrow Lear jet and thanked the crew.

Two weeks later, I would learn that things had worked out for Mario — he received a pacemaker in a South Florida hospital and took some time off to rest back home in Brooklyn. But, as we parted at the airport, emotions were high. What was supposed to have been a two-hour flight had turned into a 22-hour ordeal. Gina and I hugged each other, holding tight for a second, with none of the formal politeness of a doctor seeing a patient’s family off, but with genuine intimacy — a bit of famiglia, even in Haiti.