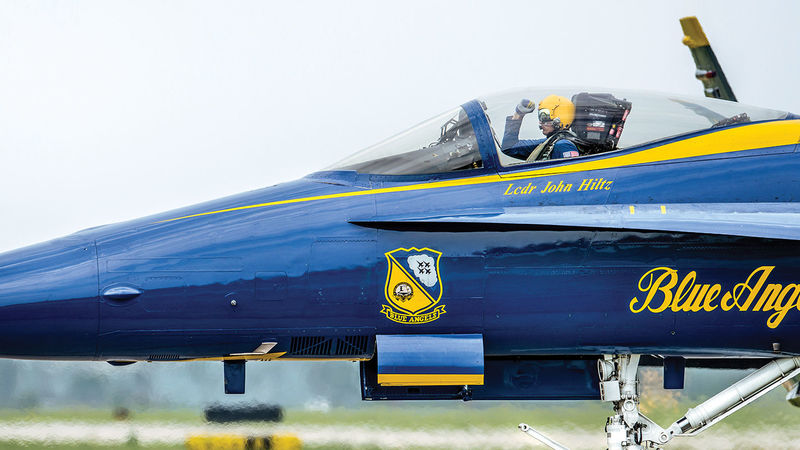 He wasn’t supposed to look.

When U.S. Navy Lieutenant Commander John Hiltz ’02 roared over Notre Dame Stadium in his F/A-18 Hornet before the November 2, 2013, Notre Dame-Navy game, he may have had the most enviable view of campus on a football Saturday.

But Hiltz — piloting one of six F/A-18s whose wingtips were some 18 inches apart as they screamed a few hundred feet over the stadium at speeds approaching 700 miles per hour — wasn’t supposed to look. And he didn’t.

Flying right wing, the No. 2 jet, in the Navy’s Blue Angels Flight Demonstration Squadron, Hiltz’s head was turned hard left, eyes locked on a reference point on the flight leader’s jet. Still, he recalls, “I could see the Golden Dome in my periphery, I could feel Touchdown Jesus as we flew right over the top of the Hesburgh Library. So all of that stuff, I was taking it all in.”

His military career includes two deployments aboard the USS John C. Stennis, flying in support of operations Enduring Freedom and Iraqi Freedom, and serving with the Marine Fighter Attack Squadron known as the “Sharpshooters” before joining the Blue Angels in September 2011.

“All of this has been so far beyond my dreams,” he says. Hiltz’s dream when entering Notre Dame was to play basketball for the Fighting Irish. But while he was playing intramural hoops for Keough Hall as a freshman, a racing heartbeat pointed to a potentially serious heart condition. Told to stop playing basketball, he opted to undergo treatment and surgery. Hiltz was again able to play, and coach Matt Doherty chose him as a walk-on his sophomore year. Other hurdles followed: airsickness in his early Navy flight training and difficulties in early attempts at landing on an aircraft carrier almost blocked his career aim. Then, nearly finished with F/A-18 training, he put his flying in a holding pattern while he voluntarily donated bone marrow to help a cancer patient whose identity was unknown to him at the time.

Being a Blue Angel means spending most of the year being an ambassador for the Navy. But Hiltz is proud to be an ambassador for Notre Dame as well. Keen eyes will pick up a few subtle cues: He flashes a ND class ring when signing autographs and, while taxiing his aircraft and saluting for takeoff, he’ll throw in the arm movements from the “Celtic Chant” done by the student section at athletics events. When signing posters and programs after a show, he’ll often write: “Go Irish, Fly Navy.”