I’m pretty sure my boss does not know about this. Lost productivity? I can’t help myself. In my defense, I didn’t ask for the second large-screen monitor that the IT people gave me to enable multitasking. They practically insisted on it. 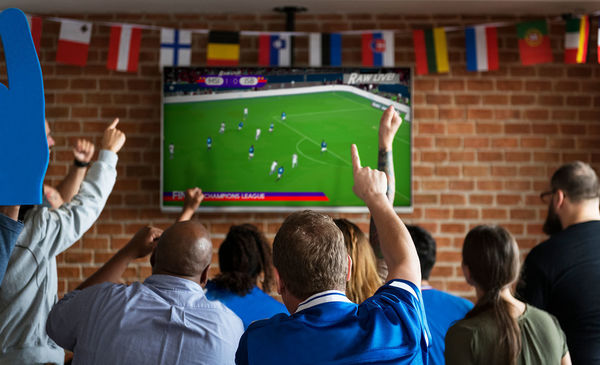 The scene in Duncan Student Center during World Cup days looks a bit like this. Photo via Shutterstock/Rawpixel.com

Most of the time I use this sacred trust for Notre Dame’s good. This summer, I’m afraid it’s my golden ticket to the chocolate factory.

So, rather than strolling over to LaFortune for double-lunch hours as I did in the summers of 2006, ’10 and ’14, slow-chewing my Subway footlong while staring at the big screen in the mesmerized company of several dozen international students (news flash: they gather in Duncan now) I’ve mastered a new skill set. Tilting the screen toward the interior of my cubicle to maximize secrecy is the key talent. Others include working early, working late, silent cheering and self-delusion.

I can’t explain my fascination with a sport to which I pay so little attention for the other three years and 11 months of every World Cup cycle. But as the calendar tips from May to June every fourth solar orbit, my anticipation builds. I check the FIFA/Coca-Cola World Ranking, learn the names and faces of star newcomers, and read up on the prospects of every team from the returning champs to the (often hopeless) host nation.

When the games come on and I can’t watch, I’ve been known to get the shakes. Could be Egypt v. Saudi Arabia in a meaningless third-round match. Doesn’t matter. My brain gets twitchy.

The fact is that my life in soccer can hardly be called that. My playing career was an unremarkable affair: seven or eight seasons for “house league” teams in the Annandale Boys’ and Braddock Road Youth Clubs. I think I scored a goal once. I know I understood that your team won when it scored more goals than the other team, but for me the game was all about kicking the ball as hard and as far as I could. My instincts — and my athletic gifts, such as they were — were defensive. “Left fullback” we called the position back then, in a distinctively American football parlance — and in youth soccer it was the baseball equivalent of coach hiding you in right field.

I awoke to soccer as an international game when I attended Englishman John Ellis’ Soccer Academy in suburban Virginia in the early 1980s. Near the end of the two-week camp our drill groups were broken into national teams. I was on “Holland.” That was cool. My grandmother’s people came from the Netherlands. We wore orange t-shirts. The England kids wore white or red, and as we played our little American hearts out for the adopted nations of our imagination, Ellis paced the sidelines chanting “ENG-LAND!!” Not exactly a morale booster for the rest of us.

I quit soccer in 5th grade. All it took was telling my parents that I wanted to play baseball instead — a sport for which I had even fewer natural gifts. My soccer days went dormant. Then one afternoon in the summer of 1990 I stopped by the Pollards’ house to see my friend Chris. Mrs. Pollard was German, born and raised and still making kartoffelsalat you’d drive across the county for. Chris’ brother Mike sat at the kitchen table, poring over some World Cup hype magazine. They talked at length about the prospects of restored West German glory (“Der Klinsmann!!”) and debated which collection of four most-formidable national teams constituted that tournament’s “Group of Death.”

In the end, West Germany avenged itself over Argentina in a rematch of the 1986 final. The Pollards were elated. I couldn’t get worked up over any championship that didn’t involve my Baltimore Orioles, but the spirit of the thing, the beauty of the game, the idea of international passions and rivalries played out on broad, flat, green fields, were impressive and appealing.

Four years later, I was cheering for Ireland in Ireland. The Brothers Brewer took me to their favorite pubs in Cork to watch World Cup qualifiers and friendlies. The “Boys in Green” made it to the knockout stage that summer in the United States, where both they and the U.S. side lost in the Round of 16. Had they won, they’d have played each other in the next game. No matter, I spent my 21st birthday drinking Guinness in my grandmother’s backyard in Pittsburgh, then watched Brazil beat Italy in Pasadena on penalty shots. I couldn’t believe it. World champions decided on the frazzled reflexes of worn-out goalkeepers? Could you imagine March Madness ending on a Best of 10 Free Throw shootout? It nearly killed my rising World Cup appetite in its infancy.

Two years after that, though, I was on fellowship teaching at a posh but not especially prestigious “public” boarding school in southern England. The school’s rugby 7s and 15s were so good that the coaches nearly forbade their athletes from playing pickup “footie” in their free time, for fear of injury. But a few lads persisted. All they required was a team of warm bodies to play against. So they recruited the working-class gentlemen of the kitchen staff and a few of the younger American and Australian teachers who had laughable soccer experience and nothing better to do. Turned out, the cooks put up a pretty good fight with their potbellies and middle-aged knees, and we won as many games as we lost. I parked myself on the left side of the defensive line out of familiarity and acquitted myself better than anyone expected. But I never used the word “fullback.”

The following spring it was time for Euro ’96, one of the continental tournaments played in the World Cup’s off-years. England hosted. Jakob and Richard, a pair of Danish boys at the school, bought tickets to see Denmark play Croatia in Sheffield. They just needed a teacher to “sponsor” their trip, which meant renting a car with their money and driving them to the game, nearly four hours north of us. My payment was a free ticket. We raced up that Sunday afternoon, the red, yellow and blue fields of poppies, rapeseed and flax rocketing by as the boys regaled me with tales of Danish football glory. They were defending European champions, after all.

In Sheffield, we made a quick pit stop in a public restroom where Jakob painted Danish flags on my cheeks and Richard informed me that I wouldn’t be sitting with them. No, they’d bought me a ticket near midfield, a commanding view of the entire pitch, ground zero of the Croatian supporters.

Croatians, in my limited experience, are friendly, tolerant people who can spot an American by his shoes even before he opens his apologetic mouth, Danish flags on his face notwithstanding.

Last Sunday, with the World Cup 2018 final still two weeks away, I was texting my friend Rasmus, another Dane, about the Denmark-Croatia match that was about to start. No Danish flags adorned my face, but I don’t know any Croatians, so within minutes I was cheering for “Danish Dynamite” (not a great nickname) once more. And I thought about my other occasional connections with this magnificent game over the years, enjoying the freedom that being an American soccer fan leaves me in these moments when the rest of the world is living and dying by the fortunes of their national heroes.

In no other country on earth could Volkswagen run its “Jump on the Wagen” ad campaign to a receptive audience. Here, it works. Of course I would — and do! — cheer for the U.S. Men’s National Team against anyone else, but they’re out. So are most of the countries of my ancestry (the Netherlands, astonishingly; Scotland, who rarely make it; Hungary, once a transformative powerhouse of international football, but unable even to qualify for a World Cup in 32 years), along with Ireland of my youthful memory — and now Germany. Germany? Yes, Germany, the country of my birth. I like Germany, but they choked this year.

England, another branch of my family tree, still looks great, so I’ll be pulling for them. I’d have had trouble, though, in the event of an England-Mexico final: I married a Mexican-American. I learned what cheering against them means for my marriage when the Netherlands knocked out Mexico four years ago. But “El Tri” couldn’t get past Brazil, now the tournament favorites, who in my view are the hated New York Yankees of the game.

See, I won’t cheer for just anyone. And while I find in soccer a humanizing link between my own quirky obsessions and the hopes that enflame the rest of the world, isn’t it an especially American thing to root for the underdog?

I’ll be caught up on work by August, I promise.