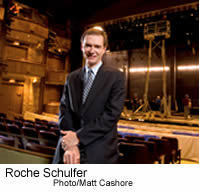 Everyone in the world of theatre has at least one of those “the-show-must-go-on” moments. For Roche Schulfer ‘73 it was in 1984, opening night of David Mamet’s Glengarry Glen Ross at Chicago’s famed Goodman Theatre. Leading actor Joe Mantegna was on stage reciting one of the script’s lengthy monologues before a full house when he forgot his lines.

“Mamet’s writing is difficult, staccato, and it’s easy for actors to lose their place,” Schulfer, executive director of the Goodman, explains. “But despite the prompting of his fellow actor, Joe just couldn’t get back on track. It was the longest forgetting of lines I’ve ever been associated with.”

Eventually the distraught Mantegna regained his footing. “It was a huge moment in Joe’s career,” Schulfer says. “After [the Chicago performance], Joe was determined to give his best performances ever; he rose to a new level.” Mantegna later won a Tony Award on Broadway for his role in the play.

Of course Schulfer had to hear this story secondhand. He was in the lobby during the entire performance.

“I never watch opening night; I can’t take those moments,” he says. “I was pacing in the lobby.”

Schulfer’s rise to the top of the arts world as executive director of the Goodman stemmed from a desire to be a well-rounded student at Notre Dame.

“I was drifting along in my sophomore year when a friend, Bob Brinkmann [’72], asked me to help him with the Cultural Arts Commission on campus,” says Roche, pronounced "Rock," who has managed the Goodman for 25 years. “I agreed to help him with ticket sales and booking events, and by senior year I was running the commission. That’s when I thought, ‘Gee, maybe I can do this for a living.’”

Just five months after graduation, Schulfer got his chance. After querying nearly every performing arts agency in Chicago, he landed a position in the box office at the Goodman. Within two years he was promoted to assistant to the managing director. By 1980 he had vaulted into the executive director position at the “disturbingly young” age of 29, making him the youngest director of any theatre in the United States of the Goodman’s size and stature. He has remained there ever since.

Schulfer says his life as a director at one of the city’s oldest and most prestigious theatre companies is not as glamorous as it might appear.

“People romanticize my job,” Schulfer says. “While it’s true that I get to meet some terrific people, the work of producing in the field of not-for-profit arts is a challenge financially.”

To meet those challenges, Schulfer spends each day fund raising, marketing, and meeting with both his artistic director, Robert Falls, and the chairman of Goodman’s board of trustees. He reviews sales and subscriptions, closely watches the evolution of all theatrical productions, and strategizes with others in the arts on opportunities for state, federal and private funding. Away from the office, he is generally attending civic events, networking or watching productions at other theatres. During the industry’s prime season, September through early July, he works six days a week, 10 hours a day—not to mention his attendance at nightly events.

“Arts are the fabric of society, and I’m passionately dedicated to making available to audiences a wide range of productions, from classical to experimental,” he says. “The whole thrust is to entertain and stimulate thinking about the world, to give people a different perspective.”

Which is why Schulfer and his artistic director get along so well. Like Schulfer, Robert Falls aspires to reach the broadest audience possible through his productions and has been known to take on unconventional pieces by relatively unknown writers simply because he believes in their ability to make a piece work.

“It’s not all about seeing a show that started here making it to Broadway,” Schulfer says. He adds, however, that watching a play such as Death of a Salesman travel from the Goodman to New York and win four Tony Awards was gratifying. “If a premiere appears in other local theatres five years later, we’re just as excited because we’ve added to the world’s bank of dramatic literature.”

Tony Award-winning director Falls, who has been working with Schulfer since 1985, appreciates that artistic sensibility. “What makes him different from other managers,” says Falls, “is his sensitivity to the artists and his ability to look at art first. Everything else follows from that.”

Despite the intensity of Schulfer’s job, business is not all business at the Goodman. Schulfer admits that some of his most cherished moments occur when he has the opportunity to socialize with the actors and actresses who appear on his stages as well as with the 125 full-time employees of the theatre.

“The camaraderie here is terrific,” he says. “I work with a great class of people, colleagues who are passionate about their work. That makes the job fun, exciting.” His personal life also involves theatre, as he and stage actress Mary Beth Fisher are a longstanding couple.

A quick peek into Schulfer’s spacious office on the theatre’s fourth floor reveals another passion. While the walls are covered with posters from plays and framed photographs of Schulfer with some of the industry’s finest actors and playwrights, a coffee table holds a different memento: a deep glass bowl brimming with baseballs. Schulfer wryly refers to himself as a “long-suffering White Sox fan.”

Much of Schulfer’s success as Goodman’s executive director can be attributed to his financial magic. In the mid-1980s, shortly after assuming leadership of the theatre, he successfully wiped out the Goodman’s $660,000 deficit in two years, leading the theatre into 18 straight seasons of budget surplus. This, Schulfer says, is “close to unprecedented” in an arts organization. Another triumph was overseeing the Goodman’s move in 2000 from its original location behind the Art Institute to its current location in the heart of the city’s North Loop theatre district. That project took a decade of preparation but resulted in a theater with more audience seating, better acoustics, and greater visibility and accessibility to the public.

On the production side, Schulfer is well-known for inaugurating the Goodman’s annual production of A Christmas Carol, which is in its 26th year, and for negotiating the transfer of dozens of productions from Chicago to cities around the world.

For his contributions to the arts, Schulfer was named “Chicagoan of the Year” by Chicago Magazine in 2000 and by the Chicago Tribune in 2001.

“It all comes down to doing something you like to do for a living,” says Schulfer. “It’s about getting up in the morning and looking forward to going to work.”

Ruth Ann Keyso-Vail is a freelance writer and photographer and the author of Women of Okinawa: Nine Voices from a Garrison Island.