I lost my friend Devin for several hours the last night of sophomore year at Notre Dame. I don’t mean that euphemistically. We actually lost him, like a North Face jacket at Finny’s bar or an untethered child at Disney World. There one moment and gone the next. He ran away during a late night walk around the lakes, and for a good two or three hours nobody in our group knew where he was.

Devin had a habit of doing things like that. He was a “runner” — give him a few drinks, and while your back was turned he’d sprint down the hallway, out the door and straight across South Quad until somebody went after him. For the first several months I knew him, running away was Devin’s peculiar way of showing that he liked your company, a game of hide-and-go-seek he instigated without any warning and absent the consent of the other parties involved.

In the time between his departure and eventual capture, Devin could be counted as lost — as absent without leave, perhaps, or at worst as missing in action. I should say, too, that he wasn’t my only friend with a penchant for getting lost. Jane was a faithful offender, though not always an intentional one. She called me late one weekend night, lost on her way back to campus and not exactly in test-taking mode. Our conversation went something like this:

She did. We met halfway across the C lot and stumbled back across campus together under the watchful eyes of the deity. Over a series of similar incidents, Jane’s faith in my insubstantial help solidified. When we went to the Kentucky Derby our senior year, she Sharpied my number across her forearm under the words Please return to. She was the smart one: Our friend Chris bolted into a crowd and it took us a few hours before we found him again, sleeping like a baby on a hillside with thousands of julep-filled horse fans revolving around him. Kathleen liked to wander away, too. She disappeared on the beach during spring break, only to be found sitting upright in the ocean, fast asleep, with a bottom full of sand from the breaking waves.

There is a danger in getting lost, a potential for risk that panicked me enough to run after my friends each time, streams of four-letter words and fleet prayers for safety blending in my head with visions of me telling their parents: I lost your kid. The words, the prayers, the calls and texts to unanswered phones were always more fierce when it was Devin involved, for the simple fact that he didn’t always run away for amusement. 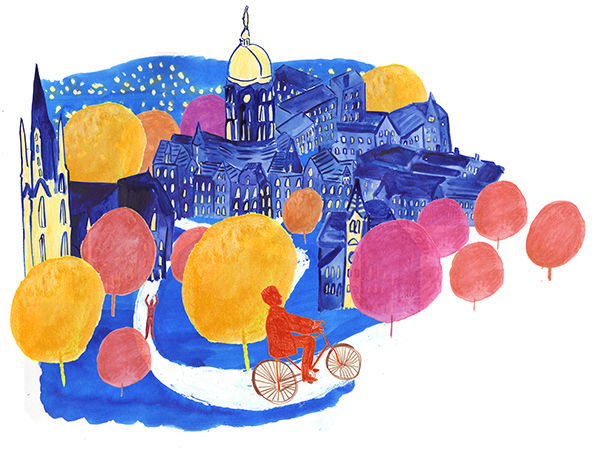 Devin had a tremor disorder that would occasionally freeze his legs and arms and send him into a trance. The sickness would come on him with little warning and would render him functionally immobile for indeterminate periods of time. Devin could always feel it coming, though, and when he got an aura, he’d often drop everything and run — toward the dorm, toward a bench, toward any place where he could wait out the storm without a crowd gathering around him to watch.

So while Devin’s sudden departures were often in good fun, they also prompted a distinct sense of terror: For those of us left in the dust it was nearly impossible to tell if an abrupt exit was a sign of his bursting affection or a symptom of a looming attack.

That last night of sophomore year, we shouted his name and called his phone for two loops around the lakes before we figured he must have run back to the dorm. He hadn’t, of course, and when I found his bed empty and the common rooms unoccupied, I hauled myself back to the lake to swear and pray and call him.

I found him, after a few more loops, about 20 feet up from the path, sitting at a splintering picnic table behind what Google now tells me is Sacred Heart Parish Center. I don’t remember if I asked him why he went there. I probably couldn’t. When I found him, Devin was in the midst of a tremor. His legs were shaking and his tongue was caught in a stutter. I had seen him just like that dozens of times, and, by then, I knew the trajectory. He had woken from the trance and soon he could speak, but it would take several hours before he could walk.

We waited, staring out toward the Main Building’s Golden Dome, and near 4 a.m. Devin told me he’d sleep there. I didn’t like the idea, mostly because I wasn’t going to leave him alone and I absolutely was not making my bed there. I offered to call Notre Dame Security Police; Devin offered to murder me. Finally, I convinced him I’d carry him back — around the lake, across campus, into the dorm and into bed. He could hop on his better leg, and I’d serve as his crutch. It was a spectacular act of salesmanship, given my scrawny physique, but, perhaps driven amenable by exhaustion, he agreed.

Unfortunately, by the time we reached the road, not even halfway back to the dorm, we must have fallen a half-dozen times. We sat on the grass where the road meets the path and tried to catch our breath. I felt weak and I felt defeated, like a drowning lifeguard, an impotent savior, a shepherd who can’t even carry his sheep.

Devin mustn’t have noticed — either that or he mustn’t have cared. He asked to go on, and I stood up and obliged, throwing his arm around my neck and grabbing his wrist and his waist. We stumbled across the road, hopped back onto the grass, hobbled two or three steps past a bicycle and stopped. Devin asked me to see if it worked.

I set him down on the grass and picked the bike off the ground. The front tire was flat, and the wheel rim was bent. Clearly the thing was discarded. Devin thought he might as well give it a try.

I propped the bike against a tree and helped Devin onto the seat. His legs were still shaking, but he could push down on the pedals and ride. Devin looked like a fool as the bike rose and fell, but he moved like a kid with the training wheels off — determined to go where he wanted. The gimp wheel did nothing to diminish his speed, and I had to run after him, laughing. We tossed the bike on the quad by the dorm, rode an ancient elevator up to our floor and got a few solid hours of rest.

For that night, I know now, I am a debtor to grace — to a hobble-wheeled bike, to the comfort it gave and to a strength that forgave me my weakness. I am perhaps mistaken to think so. We were lucky, after all, to get out of a bind we had placed ourselves in. Yet even if I downplay the incident’s worth — if I call it dumb luck at a fortunate time — I can’t escape the sense of salvation that I felt watching Devin ride away on that bike. Broken as it was, it saved us both, and what better means of salvation — of mercy — than a tool that’s as broken as you?

John Corgan’s essay won first place in this magazine’s 2014 Young Alumni Essay Contest. The author, who was born and raised in Northeastern Pennsylvania, lives in Brooklyn and works for a translation and immigration consulting firm. The student names used in the essay have been changed.