When you think of classic albums, you can’t help but conjure images of their unforgettable covers. The Beatles’ Sgt. Pepper’s Lonely Hearts Club Band featuring a crowd of everyone from Albert Einstein to Shirley Temple, the underwater baby in Nirvana’s Nevermind, even AC/DC’s Back in Black album said everything about how the band was feeling with just one color.

Brian Grunert ‘92 thinks about this all the time—and not just because it’s for work. “I was obsessed with album packaging early,” he recalls. “My thing in grade school and high school was to do pencil and crayon renderings of the album covers I loved. Rush was my favorite band and I loved their Moving Pictures cover. The U2 War album also got me . . . so did Iron Maiden and their monster Eddie. A great cover is the perfect finishing touch to great music.”

Sure, he knew what he loved, but he just didn’t know if he could make a living at it. “I didn’t enter college with this in mind,” Grunert says. “Covers always seemed like something fun but not a practical way to map out your future. I originally had the idea of being all about business, but this interest slowly evolved.”

Home-grown
The first surprise for Grunert was deciding to stay in Buffalo, New York, after graduation, a place he admitted he once thought about getting away from when he was younger. “I came back here, and advertising was the best bet for entry-level designers in town, so I started sending out resumes,” he says. “I also was in a band with two guys I went to high school with, and my wife and I decided to stay instead of going to Chicago or another big city. I got a job at Travers Collins, a local agency, in 1992 and was there for five years. It evolved from being a low-level graphic designer to working with clients like the Buffalo Bisons [baseball team], doing marketing and collateral ticket packages.”

Eventually he found his way to the art director position with the firm Crawley Webb but couldn’t stop himself from moonlighting as a cover designer for local bands. “Even my band, Wisdom of Children, was a good fantasy project that combined my love of music with this cover career I was growing,” he says. “Before long, more bands started seeing my work and asking me to do things for them. It was a lot of fun.”

The fun even allowed him to go work for Righteous Babe Records in 2000, doing art for music on a regular basis. “Working for them was the best because now I was living my dream,” he says. But then another dream came along — fatherhood.

“When my daughter, Hope, was born in 2002, I had to decide between what I wanted to do and what was best for my family. I went back to the agency life as an associate creative director . . . but at least they still allowed me to work on packaging on the side.” In fact, one of his side gigs was about to pay off big time. 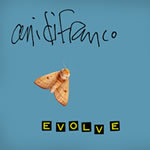 “Ani DiFranco has a label in Buffalo, and someone introduced me to her,” he says. “She’s prolific, so I was doing at least one cover a year, and it turned into more than 10 albums. We won the Grammy in 2004 for Evolve.”

Grunert says he couldn’t believe they even got nominated, let alone took home the most coveted award in all of music. “I didn’t even know the record was submitted for consideration, and then I found out from the printer about the nomination. I was fixated on taking pictures on the day of the Grammys, and now my name was being called and I suddenly had to, like, give a speech!”

Grunert, who cites the Revelling/Reckoning and Canon albums as his other favorites with DiFranco, now sees that the Grammy accomplishment came from an open collaboration and getting to know each other over time.

“Ani’s a painter, and she was very involved in the visual aesthetic before I came aboard,” he says. “I recognized I was inheriting a well-defined visual product, and it had a look that fans were expecting. We were taking it in a new direction but also trying to mesh what was important to both of us. Today, there’s an easy shorthand between us when we work together. I respect the fact that she’s such a DIY rock person and the Grammys don’t mean a lot to her in comparison to just creating music for its own sake.”

With firm accolade in tow, Grunert decided to pitch local superstar band The Goo Goo Dolls. This led to bass player Robby Takac hiring him to do work on his own small label, Good Charamel Records, for bands such as The Juliet Dagger and Last Conservative. “We’d see him play when we were in high school,” Grunert says. “His band has brought sensibility to the indie rock struggle, and it’s been fun to become friends through the process.”

Takac believes Grunert’s strength was that he took the time to truly understand the business, not just the art. “Brian works in a ‘what does this mean in the big picture’ way some art directors find it harder to work in,” Takac says. “He incorporates the idea of the marketing and positioning of the product relating to today’s music business while maintaining the artistic integrity of the package.”

Despite all these side opportunities, Grunert longed for his own full-time company to devote to his art interests after taking the responsible ad agency route long ago. In 2006, White Bicycle was born and, most important, with the thumbs-up from his family. “It doesn’t hurt when you can jump on your wife’s health benefits,” he says with a laugh.

And, yes, he never gave up playing the music, still working that bass for crowds. “I’ve always gotten part of my identity from music, but my abilities are just more refined in art,” the 38-year-old admits. “The more success I had with packaging, the more I drifted away from being so intense about my playing. But to be able to be involved with the level of music projects that packaging allows, it makes me feel like I made it in the business, even if it had to be in a different part.”

Beyond his musical passion, Grunert believes his parents gave him the gifts to make it right from the start. “My dad’s an engineer, so I think the meticulousness of that, the craft person you have to be in engineering, had a lot to do with my own work ethic,” he says. “My mother is in marketing so it’s not a big stretch to see how she could get me to think about the business end.”

Packaging the future
Along with success is still the uncertainty of the iPod age and what it will mean for Grunert’s future. “The digital downloads cut both ways,” he says. "On one level it’s horrible for the industry because less people are buying the physical record, but the upside for packaging is I feel it challenges you more to make something really compelling for people to pick up an album and hold it, to want to have packaging be part of their experience.

“The physical CD is more of a fetish object for true fans, and the labels are recognizing those fans will buy it for even $25 if you put some special papers in it and give them extra value.”

It’s not always easy to create on the spot or to deal with the pressure of running your own shop. Still, when Grunert looks for inspiration, he just remembers what it feels like that first time.

“When I’d get a new record as a kid, I would pore over all the details of the album and feel privileged to be a part of it,” he says. “Lots of fans of the music that I’m a part of packaging do the same thing. The first impression they have of music is that cover, the first thing they see before they start playing it. That moment of something new, it feels terrific to be a part of it.”

Eric Butterman is a New York-based writer and creator of sales seminars for businesses. He can be reached at ericbutterman@yahoo.com.