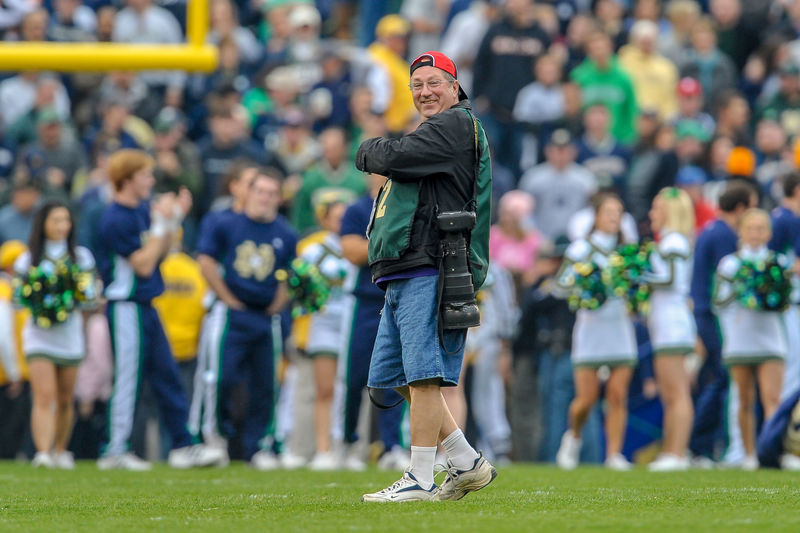 Notre Dame’s Dwight Clay ’75 hangs in midair, his wrist flexed in a follow-through as the basketball arcs over the fingertips of a lunging UCLA defender. Under the rim, mantis-limbed Bill Walton extends himself to assert territorial control over his natural habitat.

An older man stands on the sidelines in a suit and tie, clasping his hands in a pose of entreaty. A few rows up from the Bruins’ bench another guy holds his hands to the sides of his head, not so much pleading as containing an emotional explosion.

We know what happened. Clay’s shot went in and Notre Dame ended UCLA’s 88-game winning streak. The photo of that tense instant on January 19, 1974, appeared in the next edition of The Observer and since then, everywhere, with every retelling of the story of that game. The image is at once an artifact of its time — long socks, short shorts, gaudy shamrocks on the vintage, Digger-era jerseys — and timeless. Most often, if credited at all, it’s published “Courtesy of Notre Dame.”

Joe Raymond ’74 took that picture. I learned that the day he died.

Neither thing surprises me. Of course Joe was the photographer. And of course, in the years we covered Notre Dame sports together for the South Bend Tribune, sharing flights and car rides and meals and hotel rooms, discussing various echoes he had seen awakened in his career, he never mentioned it. Joe could talk and talk, full of curiosity and opinions and chirpy laughter as he pinballed around subjects, but those seldom included himself, and least of all his pictures.

Photojournalism meant something to Joe; he would fight for his place in photo scrums and gave no ground to anyone who interfered with the working press. That got him arrested once after a clash with police outside the county courthouse. (I’m confident the apology from the city satisfied him at least as much the $65,000 settlement, but I never heard him talk about that, either.) He cared a lot about his job, just not about whether he got credit. Sometimes he literally gave his work away.

Have you seen the photo of Moose Krause ’34 in a cowboy hat, hoisting his index finger to celebrate No. 1 Notre Dame after the Cotton Bowl win that clinched the 1977 national championship? Joe Raymond took that picture. When I asked him about using it for the cover of my book about Krause, fully expecting (the publisher) to pay, Joe said, in effect, “Sure, here,” and handed it over for free.

Giving stuff away was kind of his thing. When our daughter was little, we’d come home to find children’s books on the porch. No rhyme, reason or occasion, just sometimes Joe would drop off a book for her. As I understand it, he had siblings who were book wholesalers, so he had access. Joe never really explained, except to deflect thanks for our little Raymond library.

I’d say we had more than a professional relationship back then, but we weren’t close friends. In the concentric circles of Joe’s life, my family was in the outer rings, and yet there’s that shelf’s worth of books that he delivered to our doorstep.

Joe was also a thoroughgoing Notre Dame guy, the son of a popular business professor, not that he ever advertised his connections. He was too independent, too idiosyncratic, to identify himself with the institution.

Professional integrity was involved, too, the imperative of covering Notre Dame with objective distance. One of Joe’s most memorable photos captures Boston College kicker David Gordon in full, bug-eyed, leaping glee after devastating No. 1 Notre Dame in 1993.

When the Fighting Irish won, he preserved that jubilation for the ages just the same. I’m thinking now of the exultation that overflows from the frame as basketball players Kelley Siemon Deyo ’01, Ruth Riley ’01, ’16MBA, Alicia Ratay ’04 and Niele Ivey ’00 celebrate the 2001 women’s national title.

Aside from his pictures, another indelible image lingers, one that I report in the same documentary spirit he brought to his job: Joe in boxer shorts and an unbuttoned shirt, ironing his pants and mocking the ESPN hot takes in a hotel room he happily shared with a colleague who was in every sense his junior.

Joe Raymond’s portfolio spans decades, but it’s that endearing lack of pretense that I’ll remember most. That and how, as a photographer and a friend, he always focused on other people.