As our new office espresso machine lay dying, bleeding out blackish water into a street of cups and saucers, I finally decided to take matters into my own hands.

Espresso machines at the Nanovic Institute live in a tough neighborhood. This summer, one of our scholars from Italy came back to Brownson Hall from a trip across the quad to Starbucks, white as a sheet, and asked if we could make her an espresso from our own machine. Caffé Americano was too weak. Her energy was flagging. She begged for help. 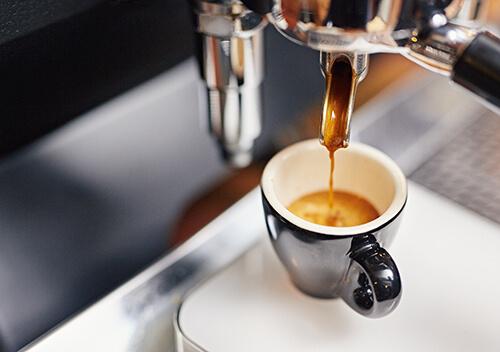 I considered her request and instructed the staff to make her a double. She held it with both hands and drank it down as if receiving Holy Communion. Voi siete la mia salvazione! — You are my salvation! — she cried, nearly in tears.

We nodded and handed her a napkin.

Over the course of the summer, our loyal espresso machine worked hard. Scholar after visiting scholar drank caffé after caffé, huddled in our kitchenette, extolling the relative virtues of Lavazza, Medaglia d’Oro and Illy. For a month or two, it was a nice little business. We ran it like family.

Then one afternoon, the staff noticed the enormous blue jug of water below the countertop depleting at an alarming rate. More distressing: There were leaks. You see, certain machines can only take so much expansion and contraction until the seal between the portafiltro (which holds the grounds) and the gruppo (which holds the portafiltro) breaks down. Because we’re talking metal parts here, this breakdown is irreversible.

Now the Institute’s fourth espresso machine sleeps with the fishes.

So I take my cup to Starbucks. They fill your coffee mugs, right? Will they do the same with a little espresso cup? Yes. First they pick it up, then they tag it like an animal, rinse it with hot water and fill it. For this, I get a 25 cent “cup” discount.

Alright, so it’s not Italy. They don’t have a bar where you can drink your espresso next to a truck driver eating a cornetto, but it feels okay for a day or two. Then I wonder: if they’ll fill my cup, could they also use my own coffee grounds?

To find out, I take my tazzina back to Starbucks with a bag of Lavazza stashed in my pants.

I figure, they have a good machine. I’ll be saving them money if they make me an espresso using my own grounds. In fact, I’ll be losing money to them on the deal. Maybe I should say I am only willing to pay for a single shot and recoup my costs. It’d only be fair, right?

When I explain this to my fellow staffers, they laugh and say I’m crazy.

But here’s what happens. I’m standing at the counter, groggy students all around me, and I explain the deal to the cashier. Then I pull out the bag of grounds and lay it between us. The barista overhears and comes over.

They say: They’re willing to use my tazzina and would even be willing to consider using my grounds, but it is impossible.

Because Starbucks baristas don’t touch espresso grounds. Once upon a time, a barista could tap out grounds into a portafiltro, developing through experience just the right amount to make espresso with perfect crema. Every day in Italy, guys in their 40s crank out espresso like this. It’s like your very own deliciously bitter oil slick in a cup.

At Starbucks, though, the barista just presses a button. The machine conveys the roasted beans to a receptacle, grinds them to powder, fills the portafiltro and forces hot water through it. Out pours the copious elixir.

All the mechanisms are internal. It is now physically impossible for a human being to make espresso in Starbucks.

I walk across the quad, under the clouds, asking myself what people are for, whether it isn’t extraordinary that I’m drinking coffee in Indiana that was ground in Italy, and how I just saved 25 cents.

It was a deal, right? We can offshore whatever, and it’s more sanitary. We’re one big family, and we’re all protected.