By now, we have a public template for responding to gun massacres in America.

The location doesn’t matter: A college campus in Virginia, an elementary school in Connecticut, a place of worship in South Carolina. 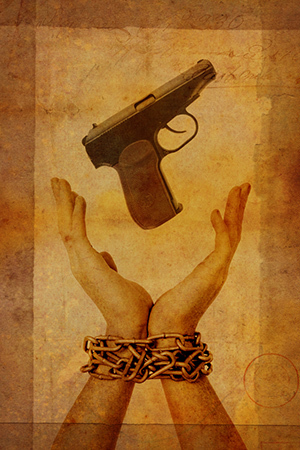 The cable news networks will offer live, breathless coverage from the scene, showing images of SWAT teams and barricaded buildings. There will be statements from a police spokesperson and grave discussion by the pundits. Eventually, there will be a profile of the killer. The words “loner” and “disturbed” are likely to be spoken. There will be heartbreaking portraits of the victims and of their grieving families.

Our political leaders will express indignation and offer sympathetic bromides. The gun-control advocates will press their arguments for background checks and safety locks. The gun-rights advocates will bluster that this is not the time to politicize a tragedy. The NRA will go on fundraising.

Virtually no one in public life, however, will ask a seemingly simpler question: should the private ownership of guns in the United States be prohibited? After so many deaths and so much pain, should we aspire to become a gun-free society?

Try to imagine it. Assume that law enforcement still has access to guns and so does the military. Assume that hunters in rural America can still obtain seasonal licenses for deer and other hunts. Imagine, if you wish to argue the point, one or two other exceptions.

We seem incapable of imagining such a society. Gun violence is so much a part of our culture, so deeply entrenched, that we have come to accept it as natural, a product of our natures rather than our laws. We do not argue — we do not even entertain the argument — whether we would be a safer, healthier, ultimately freer society if we did away with guns entirely. That conversation is practically unthinkable.

In this, we are like the Roman Stoics of antiquity, who argued how best to treat their slaves but never considered the status of the institution itself. In her book Intelligent Virtue, the philosopher Julia Annas writes that slavery was basic to the structure of the ancient world. To own slaves was not only legal, it was traditional, an expression of long-standing social and cultural values. Most people owned slaves or were slaves themselves, and there was no reason to question such arrangements or think they would ever change.

The Stoics raised many questions about slavery. They argued whether slaves had rights, and whether it was wrong to abuse them physically or sexually. They advocated treating slaves as brothers and sisters; they called for respecting the innate human dignity of their slaves.

What the Stoics did not do was question the existence of slavery. They did not argue that slavery should be abolished.

Today we argue about interpretations of the Second Amendment, over how to define an assault weapon, or whether mass slaughters should be blamed on violent video games, music or movies.

Perhaps someday this will change. Perhaps future generations of Americans will view gun culture in America today as we view slavery in ancient Rome — as a tradition that was eventually, thoroughly and properly rejected throughout the civilized world. Someday we may look back at the American gun culture, as we now look back on slavery, and wonder why we tolerated for so long such an offense to human life.

John Duffy is an associate professor of English at Notre Dame and the O’Malley Director of the University Writing Program.