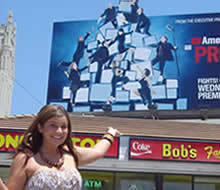 Gwen Uszuko ‘06 beat out nine other contenders to win the TV Guide Network’s America’s Next Producer reality show. As the winner, she receives $100,000 cash, a production office in Hollywood and a first-look deal with TV Guide Network. The 10-episode series, which was taped in May and began airing in July, offered viewers a behind-the-scenes idea of what television producers actually do.

Uszuko had been working as a web producer at KDVR-TV in Denver for a year when she began researching film schools. “I knew I wanted to move out of the realm of news,” she says. Then she saw a link online about the new reality show and sent a short biographical video. Her video was one of three chosen by the show’s production company to compete in an Internet contest for a slot as one of 10 contestants on the show.

That’s when the Notre Dame family connection kicked in. Uszuko, an American Studies major, sent an email about the contest to two teachers in Notre Dame’s Film, Television, and Theatre program, and her message was posted on the FTT listserve. In it, Uszuko asked FTT grads to check out her video and, if they so desired, to vote for her.

“In the end I got almost twice as many votes as the second person,” she says. Other spots on the show were filled through auditions in Chicago, New York and Los Angeles. During the series itself, a panel of judges selected which contestants to keep and which to eliminate.