A son asks me when I played the best basketball of my life, and I say, instantly, without hesitation, The summer before I turned 28.

And back floods every Saturday morning solo workout with maniacal drills in order to finally develop even a semblance of a left-handed hook, and Sunday afternoon doubleheaders with six guys running full-court for two hours and then collapsing in the grass laughing and moaning for beer, and every other evening’s headlong run on a beautiful court in west Boston, under elm and oak and maple trees, against guys who were not only my friends but terrific ballplayers, and they were in superb shape then, too, and loose and limber and furiously competitive and we did not yet have wives and children and serious jobs in which you don’t mind staying late because you love the work and it isn’t work, so we would assemble casually at dusk, one guy having called two guys who called three others, and there might be a guy or two there we didn’t know and we would wrap them into the game, swapping them after a while if one was markedly better than the other; 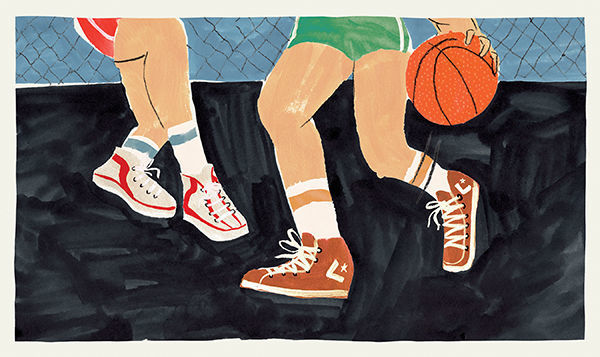 Or one of our guys might have brought a cousin or a college friend or a friend from work, and almost always those stray guys were better than they appeared to be, perhaps because they were there as obvious appendices, so they rebounded hard and played defense and didn’t yap and were decent teammates who hustled after balls and didn’t call for shots and didn’t hack in desperation and often didn’t even call fouls even when they were most egregiously and incontrovertibly and inarguably fouled;

And the quality of play was such that sometimes passersby would stop and watch for a while, old folks out for their evening constitutional, or folks walking their dogs, or kids riding their bikes, and occasionally even the local cops, who would pull their cruiser into the pool of dark under the biggest elm and watch us for a while, perhaps remembering when they were young guys in Boston playing ball under the lights in the thick dense salty evening air stuffed with moths and nighthawks and the squeak of sneakers and the cadence of the ball and the muffled code of the players commenting on picks and screens and silly shots and the score and whose turn it is to buy a round at the pub;

And every one of us regulars knew every other one of the regulars and the intricacies and idiosyncrasies of their games and the fitful wrinkles of their habits and characters, and every one of us had seen every conceivable fake and dodge and trick and deke in the other guys’ toolboxes, so the games got better and better as the summer went on because each guy had to up his game or else, so you had to invent new moves and new fakes, and actually play defense, and hustle after balls, and box out, and rebound your shot, because if you did not do these things you would get smoked by your friends, who had no mercy or pity whatsoever on the court and would have happily and cheerfully and with a deep and abiding pleasure held you scoreless if possible, and scored a hundred baskets on you if possible, because that mercilessness and pitilessness was part and parcel of the joy of the game, that the game was intense and ferocious and muscular and played as hard as you could possibly play, harder than guys had ever played in the various uniforms of various schools, because this was not a game against some other school, some team of faceless guys from another town; this was a game against your boys, your friends, your teammates, your tribe, your other brothers; and young men do nothing quite so ferociously and intently and happily as try, with all their might, with every iota of their strength and effort, with the deepest of joys in their hearts, to defeat their brothers.

And even now, all these years later, when I am no longer loose and limber and supple and muscular and relentless and a youth in the fullness of his small physical gifts, I feel a jolt of the pleasure of that summer again, just by trying to put it into words. I do not think that writers admit enough that much of what they are trying to do is drape words upon that for which we have no good words, finally; like that summer, that court, those friends, those mammoth elms, the little boy who has hooked his fingers into the metal fence around the court and is watching us with both awe and anticipation; for very soon, in the measure of things, he will be me.

Brian Doyle is the editor of Portland Magazine at the University of Portland and the author most recently of the novel Chicago (St. Martin’s Press).