Three members of Notre Dame’s Haiti Program, a public health effort to eliminate the disease lymphatic filariasis, were attending a meeting at the Hotel Montana in Port-au-Prince when the earthquake struck at 4:53 p.m. local time on January 12. In their own words, they recount what happened next. 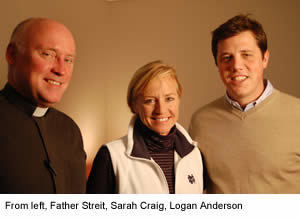 There were about 25 us gathered at the Hotel Montana for our semi-annual partners meeting for the Neglected Tropical Disease Initiative in Haiti. Our meeting finished about 3-3:30 and we had set about relaxing after the meeting, talking about some of the issues that were covered. And then we split apart into different groups. I went off to do some emails. The Notre Dame people split off into three different groups. When the earthquake hit we were in three different places on three different rooftop terraces.

All three groups rode the building down. All of us went down at least two floors. [The worst injury we sustained] for the whole group was that one of our staff people had a double fracture of his leg. When we saw each other we were overjoyed at the miracle of us surviving. Some of our colleagues from a partner organization at the meeting were buried in the building for a few days but [eventually] were found unhurt. Everyone that was associated with the meeting in our partnership has been accounted for, save one.

. . . I saw so many things that were just horrific. I don’t know what other words to use. People with limbs torn from their body, screaming in pain. Children wandering about, perhaps who just lost their parents. Bodies just stacked up four and five deep, like cordwood.

Another thing that struck me is that the churches were all gone, places that I’ve prayed in. Places that mean so much, not so much to me but [to]the Haitian people. [Places that were] their source of hope. [I remember] the people at night praying and singing and holding hands as perhaps the only thing they could do. Without food or water, they turned to God.

There were some who challenged me and said, “Father, the Church fell down on the people as they were praying. The archbishop was killed in the cathedral as he was praying.” And [they said this] with a little bit of a point to it. But those were the exceptions. Faith perdured, but one could easily see why someone’s faith would be shaken.

I’ve come away with an experience that I did not wish for, would not wish for. But one which has shown me the strength that we have, the human spirit. That spirit so clearly sustained by our belief and our faith.

The meeting ended, and we decided to hang out at the Hotel Montana for a little bit. Logan Anderson and [some colleagues] and I went to a terrace to have a beer and wait until dinner started. We were sitting outside, looking over the countryside [talking about] how many positive things were happening in Haiti.

We were sitting there less than 10 minutes when the earthquake hit. We were on the fourth floor and the building around us came down. The railing came down, and we were all thrown down to the ground. The building below us just collapsed and we could feel it going down each floor, down until we ended up somewhere around the first and second floor with the rubble underneath us.

We looked around to make sure everybody was okay, and the four of us were. The entire hotel complex had fallen and was in ruins. We got up, got organized and decided to start looking for people. The first person ironically we found was Father Tom. He had been right underneath us, but we didn’t know it.

We gathered and went to an area that was kind of a common meeting area where people were coming out of the building and out of the rubble. There were many injuries including one of our Haitian colleagues, who works for the program. He had a broken leg.

I have experience as an emergency responder, and so I splinted his leg. I tried to help some other people along the way and did some more makeshift splints out of sticks and torn-up shirts and flags.

We wanted to get away from the rubble because we didn’t know if it would slide more. So Father Tom and Logan went down the hill and looked for a place, and we found a grassy spot where we bedded down for the night. And more people came who were in our situation.

So that was the start of the couple-day ordeal of where we were: In the cold huddled together. Just sharing whatever provisions and supplies that people had. People were very generous. Very Haitian style: whatever you had you shared.

You know you go through your life and wonder what it would be like to come face-to-face with God. I feel as though I had that conversation. I said, well if it’s my time to go, I’ll go. I didn’t think I was ready yet, but that’s not my decision to make.

And it was at that moment when I had this peace that it wasn’t my time and that’s when the rubble settled. And we walked out of it. And we were constantly praying for all of the people that we didn’t know about and the people that we knew who perished. And that was what was so hard. Knowing that so many people had passed.

[After the meeting we went to the fourth-floor room of one of our colleagues from USAid to have a beer before dinner.] The original plan was to be in the room and have the beer. But she had this great terrace next to her room. So [we decided], let’s enjoy it outside. About five minutes after we sat down we felt the shaking.

At first there was a split second when Sarah and I had this recognition of “what is this?” “Is this a joke?” “Or is this . . .”

All I remember is being thrown from my chair, being thrown to the ground and feeling the terrace going bang down to the third floor, bang down to the second floor, and then the whole thing shifting forward, tilting forward. And then [we were enveloped in] dust for 30 seconds or maybe a minute. Then everything cleared. After that the focus was “We gotta get out of here.” So we helped each other climb out, and get down to stable ground.

I remember seeing Father Tom soon afterward. He was the only one I could see other than the three people who had been on the terrace with me. That was a pretty big relief. We met right there and made our way to a safer area. I remember thinking this is something you see on TV, not something you experience.