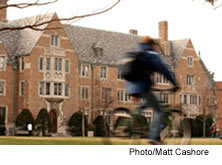 They Call Themselves: The Big Red, for the color they traditionally wear in interhall sports.

Named for: Irish-born Father Patrick Dillon, CSC. He was a Notre Dame graduate and only 33 years old in 1865 when he was named the University’s second president. The same year he supervised plans for construction of the University’s second, white-domed administration building, which would be destroyed by fire 14 years later. His leniency in disciplinary matters made him popular with students, but Dillon served only one year before the CSCs sent him to France to serve in the congregation’s central administration. In 1868, after learning that his widowed mother, his grandmother and several younger siblings were drowning in debt, he and his younger brother, Father James Dillon, CSC, left the order to support their loved ones. Both died in less than a year, James of tuberculosis, Patrick of an illness which records do not identify.

Distinguishing Features: Designed by architects Charles Maginnis and Timothy Walsh of Boston, who also designed the law building and Alumni Hall, Dillon is another of the campus’s abundantly adorned collegiate gothic halls. Its exterior features include likenesses of Saint Jerome, the Latin scholar known for translating the Bible and, in legend, for pulling the thorn out of a lion’s paw, and a Viking ship carrying Saint Olaf, the Norwegian king credited with bringing Christianity to Norway. A side altar in the hall’s chapel includes a shrine to Saint Olaf and is dedicated to the memory of Knute Rockne, a native of Norway. Rockne died just months before Dillon Hall opened in October 1931. The hall’s exterior also features images of athletes in tennis, basketball, football and running gear as well as students studying and even sleeping.

History Made There: During World War II, Dillon, along with Alumni, Zahm, Cavanaugh and Breen-Phillips halls, hosted Navy and Marine officers training at Notre Dame.

Lore: A persistent legend had it that a poster of a beer-swilling Shakespearian gentleman was put up on a wall in a first-floor room by Heisman Trophy winner Paul Hornung ‘57, when he lived in Dillon. It remained a fixture from some point through the early 1990s, but Hornung says he knows nothing about it. The Big Red have been known to pull fire alarms at dances and other events of their next-door-neighbor and rival, Alumni Hall. Dillon’s familiar “Go Big Red” banner was a gift to Father David Tyson, CSC, ‘70, ’74M.A., the Holy Cross Congregation’s Indiana provincial superior and former Dillon resident, from a friend at Indiana University-Bloomington (IU’s school colors are cream and crimson). In 1977 Grace Hall residents stole the banner, beginning a near-riot. When Dillonites marched across campus to reclaim it, residents of Grace threw Roman candles and firecrackers from the tower. The Dillon men returned fire with rocks, breaking some of the hall’s windows. Dillonites then kidnapped Grace’s dorm president from a Hall Presidents Council meeting and ransomed him for return of the banner. Dillon ultimately recovered the banner, though it had been damaged by Grace residents who tried to burn it.

Traditions: Each year for more than 30 years hall residents have hosted the Dillon Pep Rally on the dorm’s front lawn the Thursday before the first home football game. The Big Red entertain students and fans with skits, songs and chants, and it has become customary for speakers and performers—usually a few players show up—to leap off the stage and crowd-surf. Even Dillon’s rector, Father Paul Doyle, CSC, ‘65, ’75M.Div., takes a dive. Also in the fall, residents participating in Dillon Day work with the South Bend Heritage Foundation to clean up a building in a low-income area of South Bend. The hall crowns Mr. Dillon and his date at Dillon’s Christmas dance after a week-long academic and athletic competition. In the spring Dillon hosts Opening Day, featuring a variety of baseball-oriented activities such as Wiffle Ball and a home-run derby. Female students can bid on their favorite residents at the Dillon Dude Auction. The highest bidder attends the Opening Day Dance with her auction buy. Proceeds from the auction go to charity.