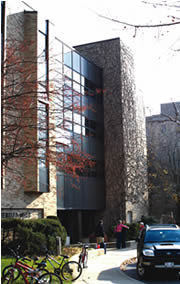 They Call Themselves: The Purple Weasels. Before the early 1990s, the women of Pasquerilla West were known as the Plaid Wave and the Pink Wizards.

Named For: Sylvia and Frank Pasquerilla, whose donation to the University amounted to the largest gift in Notre Dame history from a living person. It provided for the construction of Pasquerilla East and West residence halls, as well as the Pasquerilla Center academic building. Frank Pasquerilla was the chairman and CEO of the Johnstown, Pennsylvania-based Crown American Realty Trust before his death in 1999.

Distinguishing Features: Pasquerilla West and its sister dorm Pasquerilla East were the first dorms to be built on what students commonly refer to as “Mod Quad” — the area between the library and Grace and Flanner halls. The L-shaped PW was originally designed to be connected with the backward-L-shaped Pasquerilla East through a shared chapel. This idea was scrapped, however, and a common space in PW was converted to a chapel shortly after the dorm was built. Unlike in other dorms, the women in PW were given the opportunity to name their chapel, which they chose to dedicate to Saint Clare of Assisi. An entire wall of stained glass depicting The Basilica of St. Francis in Assisi, Italy, was completed in 1998.

History Made There: PW was the first dorm to be built specifically for female residents, and, unlike most other dorms on campus, male students have never lived there. It is also the first dorm (along with Pasquerilla East, which was built in the same year) to be equipped with air conditioning.

Lore: The women of PW have a strong connection to several faculty members through their Hall Fellows program. The eight fellows—including Dennis Snow, professor of mathematics, who often plays guitar at Mass—have dinners in the dorm, hold a tea party for incoming freshman, take part in weekly Masses and join the dorm tour of the football stadium. Last year PW’s interhall football team won the coveted Interhall Football Championship Game, played in Notre Dame stadium. Each year, a senior in PW who exemplifies compassion, commitment and service to others is presented with the Tara K. Deutsch award in memory of the former PW resident who died in 1993 of a congenital heart condition.

Traditions: Pasquerilla West’s annual signature event is called Queen Week. Each section of PW competes in various events—Notre Dame trivia contests, community service projects and sporting events, for example—and at the end of the week a freshman in the winning section is named the queen of the dorm.